The late Savant Thakur, a PhD candidate in the Department of Physiology’s Centre for Muscle Research, has had some of this thesis research published in The Company of Biologists Ltd’s Biology Open.

The article HSP70 drives myoblast fusion during C2C12 myogenic differentiation shows how increasing expression of a specific heat shock protein (HSP70) promotes the fusion of muscle cells. Heat shock proteins are molecular chaperones expressed during cellular stress to assist in the refolding of proteins to restore their function.

The study described in the publication was based on the second research chapter of Savant’s doctoral thesis. He explained factors that promote or increase the fusion of muscle cells have potential to improve a muscle’s repair response to injury and in various muscle diseases, such as Duchenne muscular dystrophy (DMD).

The 27-year-old School of Biomedical Sciences scholar sadly succumbed to DMD on 16 June 2019 after being diagnosed with the disease at age 10.

The important preclinical work in his paper lays the foundation for future investigations into how increased HSP70 expression at specific times after injury might enhance muscle repair, says Professor Gordon Lynch, Savant’s PhD mentor and Director of the Centre for Muscle Research.

“The preclinical work described in Savant’s paper has the potential to have a broad impact in the community to improve muscle repair in response to injury such as those caused by exercise or sport, traffic accidents and surgical procedures, and those with degenerative muscle disease such as DMD,” explains Professor Lynch.

“Treatments that can coordinate the expression of different HSPs, could be a strategy to help confer protection to affected muscles in many muscle disorders, such as DMD, and would represent a major clinical advance.”

Such treatments would have the potential to delay progression of the dystrophic pathology, enabling patients to live longer and with a better quality of life until such time that a viable cure is identified. 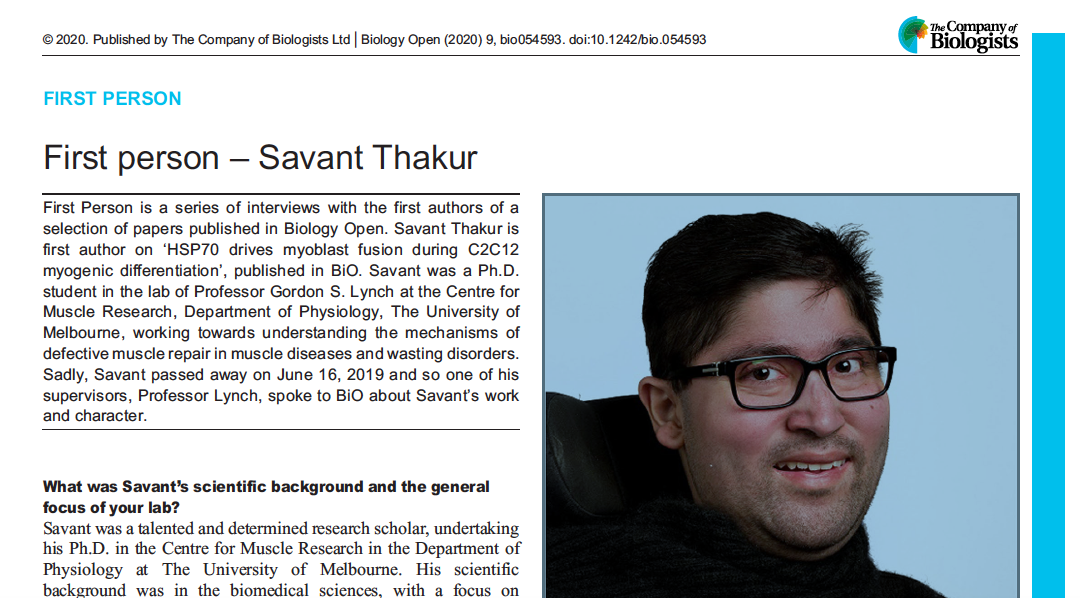 Savant’s passion was to study DMD with the aim of identifying a way to help patients around the world with the disorder. Sadly, Savant fell ill as a result of complications arising from DMD before a cure was realised – but the work of this determined research scholar has gone a long way unlocking new treatment options.

Applications for the Savant Thakur Memorial Scholarship are now open.