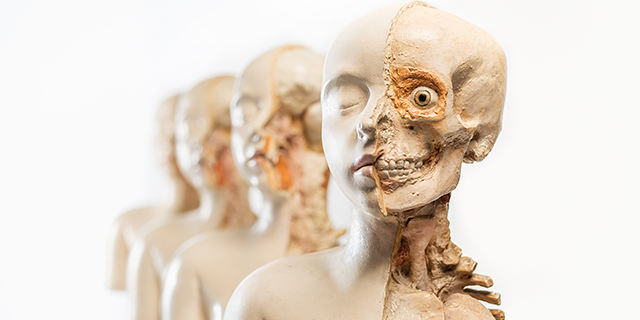 Congratulations to Gavan Mitchell and Ryan Jefferies whose photograph, “Modelling Dissection”  has been shortlisted to the top 100 out of 4000 entries in The Royal Photographic Society International Images For Science 2017, - the prize winners will be announced in August. The image will be exhibited at the RPS International Images for Science Exhibition 2017 and will tour around the UK, including major science festivals, and will be seen by over 140,000 people. The International Images for Science competition looks for the best images to show how photography is used in science, can put across scientific concepts or illustrates the role of science in our everyday lives.

This editorial photograph depicts a series of four plaster models showing thoracic and abdominal dissection. They were created by sculptor Franz Josef Steger and embryologist Wilhelm His (Germany, c 1900), The models are part of the Harry Brookes Allen Museum of Anatomy and Pathology collection at the University of Melbourne, in Australia.