Venoms have evolved in numerous lineages for use in both predation and defence. The ecological role of venom influences the structure of the venom apparatus and the composition of the venom itself. The defensive venom apparatus of fish are testament to this, characterised by a passive delivery system and venoms that cause intense pain to deter the predators unlucky enough to experience it.

As we have discussed in previous posts, an animal’s adaptations facilitate its survival and thus its evolutionary success. Predator-prey interactions are amongst the most salient of challenges to survival, and therefore play a significant role in influencing the evolution of species. The selective pressures exerted reciprocally between predator and prey drive what is popularly termed an ‘evolutionary arms race’: the evolution of an antagonistic adaptation in one organism driving the evolution of an adaptation in another to counter it. Venom is such an antagonistic adaptation and it has been converged upon by numerous species, both predators and prey, in this Sisyphean struggle to gain the upper hand. However, in contrast to many other predatory or defensive traits, venom is a secretion that has evolved to serve its functional role not only outside the body of the producing animal (such as a spider secreting silk to construct a web), but inside the body of another animal. The web of a spider is a predatory adaptation formed of the spider's silk secretions. Brian Rogers CC2

The challenge for venom lies in the fact that the physiological landscape between different species’ bodies may vary substantially, depending on the organism and its environment. Blood chemistry, body temperature, nerve cell configuration, protective barriers (e.g. skin, scales, feathers), and predatory or defensive behaviour will differ substantially between a lizard, a bird, and a fish, for example. A venomous animal may target one or a number of such species, depending on by the role of venom in its ecology – namely, which species are the intended targets and whether the venom is being used for prey capture or predator deterrence. It therefore stands to reason that the morphology of the venom delivery system and toxic content of the venom will reflect this.

As the role of venom used in predation is to subjugate prey, such venoms contain toxins that effectively disrupt the physiology of prey species in a manner that weakens or immobilises the prey animal to facilitate its capture. Venom toxins may also be specialised for the components of a prey animal’s physiology whose disruption will achieve this outcome quickly, such as molecules associated with the nervous or circulatory system. This rapid activity and high potency is essentially what snake venoms are famous for (however, this isn't necessarily the case... to broaden your thinking on this topic, check out this series).

In a predatory context, it may not especially matter whether the venoms cause pain or any other non-lethal side effects. However, venom systems that have evolved purely for use in defence are typically characterised by immediate, severe pain. In this context, the primary objective is the immediate survival of the venomous animal, and extreme pain is a very effective means of stopping a predator in its tracks. Amongst venomous vertebrates, the award for most painful venoms likely goes to the fish. 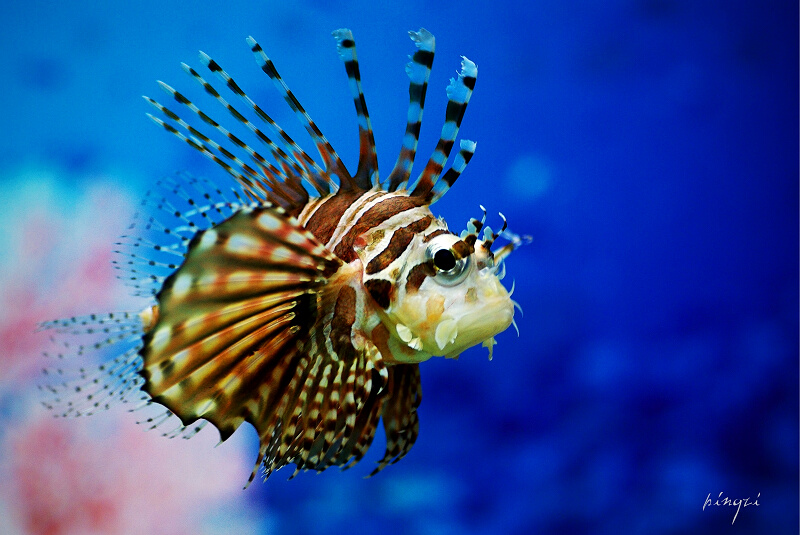 Don't be fooled by their beauty - lionfish are covered in numerous spines with venom that packs a punch. Image: gary lin CC2.

While we may not immediately associate venom with fish, studies of the evolution of venom in fish indicate that there are actually substantially more venomous fish than there are venomous reptiles. In fact, fish comprise more than half of all venomous vertebrates. Once thought to number around 200, the abundance of venomous fish species is rapidly being re-evaluated as research into the field expands, putting current estimates at between 2000-3000 species.

Within the Gnathostomata (jawed vertebrates), there are two main clades of fishes: Chondrichthyes (the cartilaginous fish, which contains sharks, rays, and chimaeras) and Osteichthyes (the bony fish, which contains all other jawed fishes). Within the bony fish, venom systems are said to have evolved independently at least 14 times – once in the Anguilliformes (eels), once in the Siluriformes (catfishes), and twelve times in the Acanthomorpha (spiny-rayed fishes). A phylogenetic tree of fish families (excluding cyclostomes) highlighting all known venomous families in orange. The exact number of venomous fish families lies between 58 and 63. The spread of venom across the clades within the Osteichthyes, along with the fairly primitive structure of the venom delivery apparatus, indicates that venom systems of fish are a relative recent acquisition in their evolutionary history, probably emerging less than 100 million years ago within each of the clades that contain venomous species. Image from Harris, R.J.; Jenner, R.A. Evolutionary Ecology of Fish Venom: Adaptations and Consequences of Evolving a Venom System. Toxins. 2019, 11, 60. CC4.

The spiny-rayed fishes (Acanthomorpha) are typically highly cryptic and sedentary, which facilitates their ambush hunting strategy. As an added layer of protection, these fish are typically decorated with numerous spines that are grooved, strong, and needle-sharp, and covered with a loose sheath. Such spines are essentially specialised scales, and despite the plethora of independent evolutionary events that characterise fish venom evolution, around 95% of venomous fish species have converged upon a similarly structured system comprising venom glands situated in grooves of a modified dorsal spine (or spines). This system has evolved independently at least 15 times. Other examples of fish venom apparatus may consist of glands adjoining the base of the spines, which may alternatively be located within gill, pelvic, anal, or pectoral regions (and there are even fish with venomous fangs!).

The spines are erected when the fish feels under threat. However, in contrast to most predatory venom systems, the venom delivery by these fish occurs entirely through passive stimulation. This essentially means that the venom glands are not associated with compressor musculature and therefore venom ejection is not controlled, nor is an envenoming event actively instigated by the fish. During envenoming, as the spine remains rigid, the sheath is pushed down - by the misplaced bite of a hungry predator or the ill-placed foot of a wading human, for example - and the venom gland is mechanically compressed. This expels the venom into the predator’s tissue with significant force (some excellent footage showing venom ejection from the spines of a stonefish can be seen here). 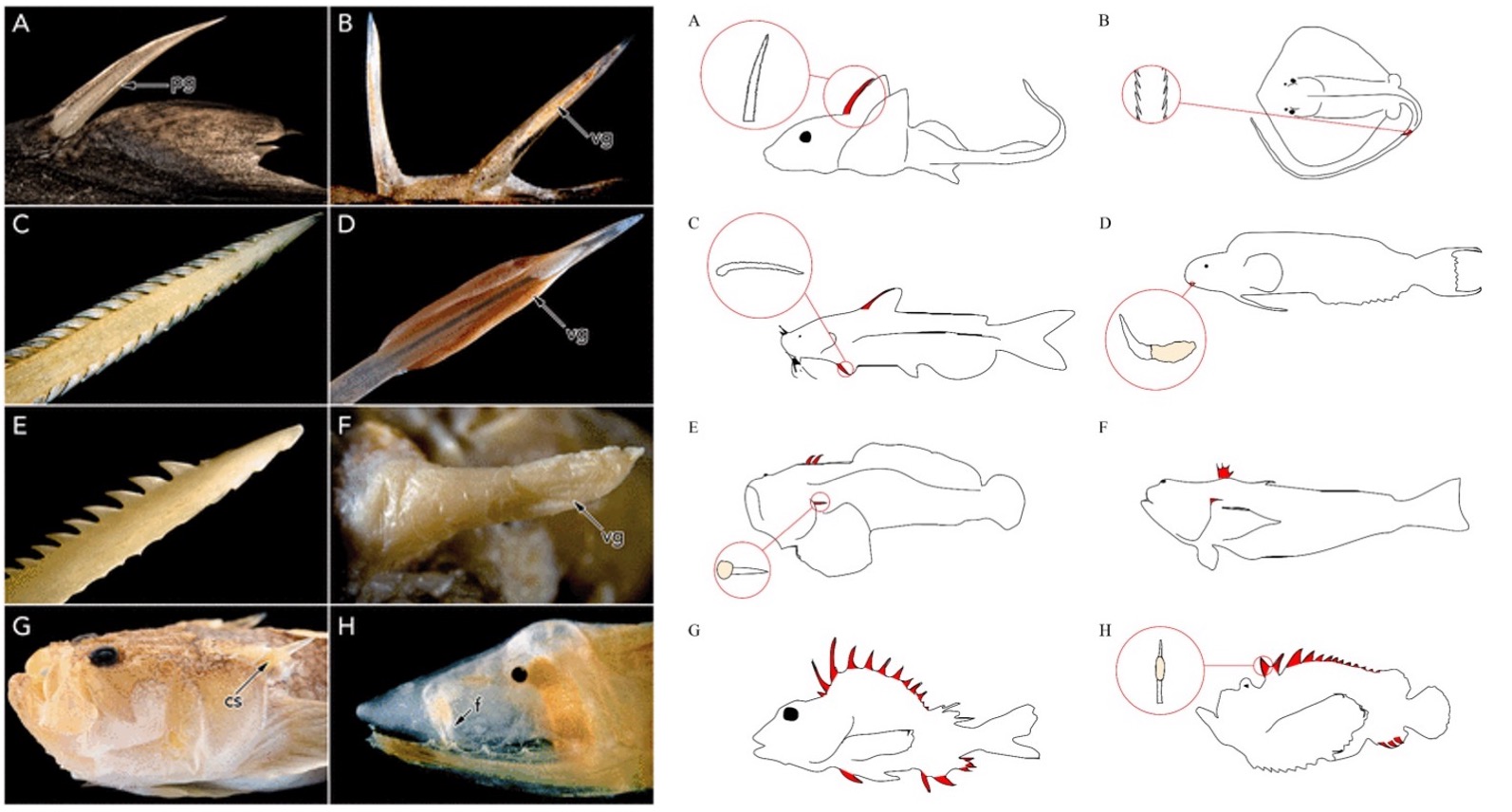 The venoms of such fish typically contain an array of large globular proteins, along with smaller peptidic compounds. All venoms, whether predatory or defensive, function by acting upon the body molecules and receptors of the target animal. Thus, defensive venoms can be broadly categorised into the same set of pathological categories as predatory venoms. In this regard, fish toxins have been shown to induce an array of activities such as cardiovascular (heart and circulatory system) and neuromuscular (nerve and muscle junction) damage, as well as cytotoxicity (cyto = cell). However, given that their functional role is to deter predators, the overall activity of these defensive venoms converges on the induction of pain as opposed to immobilisation – though the pain may itself be immobilising. Fish envenoming is said to be excruciatingly painful, far beyond that incurred by the mechanical damage of the spine itself. This can be caused by a number of mechanisms. For example, cytotoxic activity by fish venoms is often caused by pore-forming toxins that literally pop cells and cause their contents to leak out. These toxins do not typically have a specialised molecular target and will act upon virtually every cell type. This is a very effective, broad-spectrum means of defence given that predatory animals may range from birds to fish to reptiles. Other fish toxins are myotoxic (damaging to muscle cells), which causes extreme pain as locomotory-essential tissue is destroyed. Many fish toxins may even bind directly with nociceptors (pain receptors). The cryptic stonefish (Synanceia sp.) sports some of the most potent venom of the fishes. Image: prilfish CC2.

While many predator venoms trend towards specialisation, fish venoms are adapted for generality as an effective means of defence, adopting several mechanisms that are effective within a wide cross-section of predatory species. For this reason, most fish venoms have converged upon a very similar array of toxin activities such that stonefish antivenom effectively neutralises the venom of most other fish species, despite the fact that they evolved independently on so many occasions. Given that the purpose of this convergence is the induction of severe pain, this is perhaps welcome news for the unwitting amongst us who are unlucky enough to experience their venom first-hand.