Which animals are venomous? Part 1

Way way back (3 whole weeks ago!) in the first AVRU blog post we discussed the definition of venom. As you may recall, it’s a specialised secretion produced by one organism that is actively delivered in order to subdue or deter another organism. Since most toxinologists (people who study venom and other poisons produced by organisms) would agree with this definition, you might think that they would also all agree on which animals are venomous. You might well think that, but you’d be wrong. 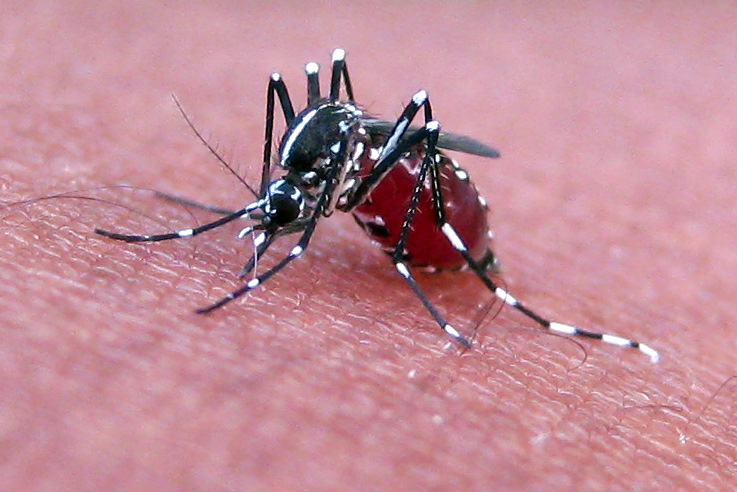 Are blood-sucking insects like this mosquito venomous? That depends on who you ask. Image: Wikimedia Commons.

There are perhaps two main reasons why toxinologists just can’t seem to agree which animals are venomous, and one of these reasons has caused quite a stir amongst venom researchers in the past decade. The first, and less controversial, is a small addendum to the definition of venom that some researchers make – it’s not necessary, according to this school of thought, that venom actually be used to subdue a prey animal, only that it be used to help the venomous organism secure a meal. Under this definition, hematophagous (blood consuming) parasites like mosquitoes, leeches and vampire bats are considered venomous. The second reason, which generates far more controversy, stems directly from the fact that nature is not carved up into neat categories that can be precisely grouped and labelled. Thanks to the constant busy-work of evolutionary processes, the biological world is full of transitional forms, borderline cases – despite common rhetoric, the links are not “missing”, they are ever-present, thwarting our desire to tidy everything up into precisely defined packages. 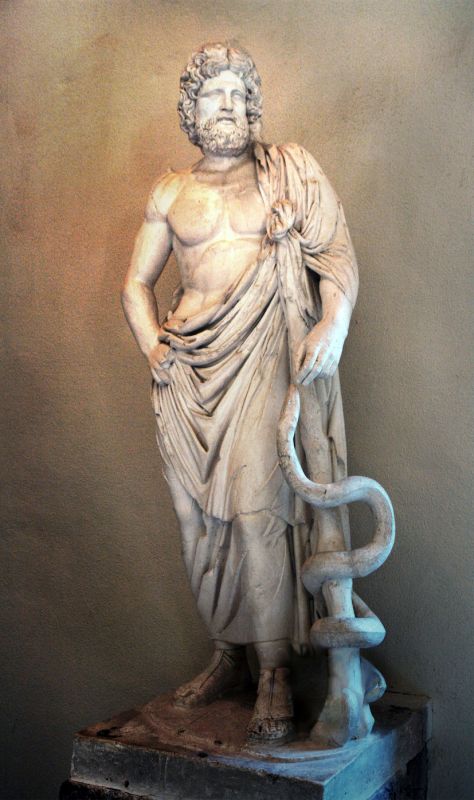 Asclepius was a Greek god of medicine and healing. His staff - the Rod of Asclepius - is entwined by a snake and remains an internationally recognised symbol of medicine (it is featured in the World Health Organization's official logo). Snakes and other venomous organisms have been associated with medicine in many cultures - the Egyptian god Horus, for example, was said to have the power to heal venomous bites and stings. Image: Wikimedia Commons.

People have been thinking about venomous organisms for a long time – indeed they have been incorporated into ritual practices and religious iconography for millennia. Much of the history of human thought, however, has focussed on, well……humans. It’s understandable for a species that thinks to think about itself, but this anthropocentric bias has historically concealed much of the complexity of the natural world from us. Famously, we’ve had several philosophical and scientific “revolutions” in our understanding of the universe that have indicated that it does not, after all, revolve around us. The Copernican and Darwinian Revolutions are two examples – Copernicus showed us that the Earth is not at the centre of the solar system and Darwin showed us that humans are not above or apart from nature, but are a product of natural evolutionary processes.

Despite these and other blows to our innate sense that we are at the centre of it all, anthropocentric biases continue to influence much of our thinking. Toxinology has not been immune and for most of its history (both as a formal discipline and an informal interest) has considered venomous organisms primarily in terms of their impact upon us. Again, this focus on clinical toxinology has arguably concealed much of the subtlety of the evolution and ecology of venoms. Although it is entirely reasonable that clinical concerns take precedence over pure scientific interest, in focussing our attention on venomous organisms that pose a threat to human health we have biased our concept of what it is to be venomous. The best-studied venomous organisms are those that use their venom to completely immobilise their prey (or, in some cases, to deter predators like us), because these are the species that can inflict potentially life-threatening or debilitating (or occasionally just really annoying) injuries upon us.

As discussed in previous AVRU blog posts, however, the vast majority of venomous organisms pose no threat to us whatsoever. These critters have therefore been traditionally neglected by toxinologists. As the fascination with obscure venom-producing organisms has slowly crept out from the dank and dusty basements of museums in which people with bad posture dissect specimens and emerged in mainstream academia, our view of what it is to be venomous has begun to shift. Part of this shift was facilitated by technological innovations that allowed us to sequence large numbers of genes (and eventually whole genomes) from venomous organisms and thereby observe the deep patterns in their evolution. Suddenly, transitional forms and borderline cases became far easier to observe and molecular and evolutionary biologists began weighing in on the nature of venom itself.

So, “which animals are venomous?” turns out to be a difficult question to answer and one which toxinologists continue to debate (via Zoom, respecting social-distancing policies) until late into the night. Sometimes, getting caught in the crossfire of an evolutionary arms race can reveal the limitations of our intuitions. In Australia, many people who consider the paralysis tick (Ixodes holocyclus) venomous would not grant mosquitoes the same distinction, despite the fact that both are hematophagous arthropods that administer toxins to their hosts in order to secure a sneaky snack. The reason for this is simple – the toxins that ticks secrete can kill humans and our pets, whereas if mosquitoes make us sick it’s because they have acted as a vector for a parasite (e.g. a virus or a plasmodium) that does the real dirty work. Why do tick toxins make us so sick? It’s not because ticks have evolved to use “venom” to subdue their prey. Actually, the functions of their toxic secretions are pretty much the same as those of mosquitoes – to numb the bite site (so they aren’t noticed during feeding) and to keep the blood from clotting, so they can slurp it up easily. Mosquitoes typically feed for only a few seconds, however, whereas a tick may feed for several days before it has satiated its bloodlust. Paralysis ticks (Ixodes holocyclus) may feed for several days, consuming many times their body weight and dramatically swelling in size. As they feed, they secrete neurotoxins that numb the bite site, preventing them from being detected by their hosts. Although their natural hosts, such as bandicoots, develop resistance to these toxins, evolutionarily naïve animals like dogs and humans are highly susceptible to them. Image: Wikimedia Commons.

Ticks are in an arms race with their natural hosts – marsupials, particularly bandicoots. Bandicoots develop resistance to tick neurotoxins (a resistance they initially acquire from their mothers), presumably so that they can detect the nasty little bloodsucking blighters and remove them with their “syndactyl” grooming claws. In response, ticks have evolved ever more potent neurotoxins. We humans and our pets are evolutionarily “naïve” (meaning we do not have an evolutionary history of exposure to ticks) and thus highly susceptible to tick neurotoxins – a single tick can kill a dog if it remains undetected for several days, whereas a bandicoot or possum may be infected by dozens of ticks and still be healthy. Mosquitoes also secrete analgesic (painkiller) toxins, but since they aren’t part of a similar arms race and only need to remain undetected for a short period of time, these toxins are not dangerous to us. The question is, should ticks be considered “venomous” and mosquitoes “non-venomous”, even though their toxins have essentially the same function? Cases like this reveal the anthropocentric biases in the way we apply words to nature. 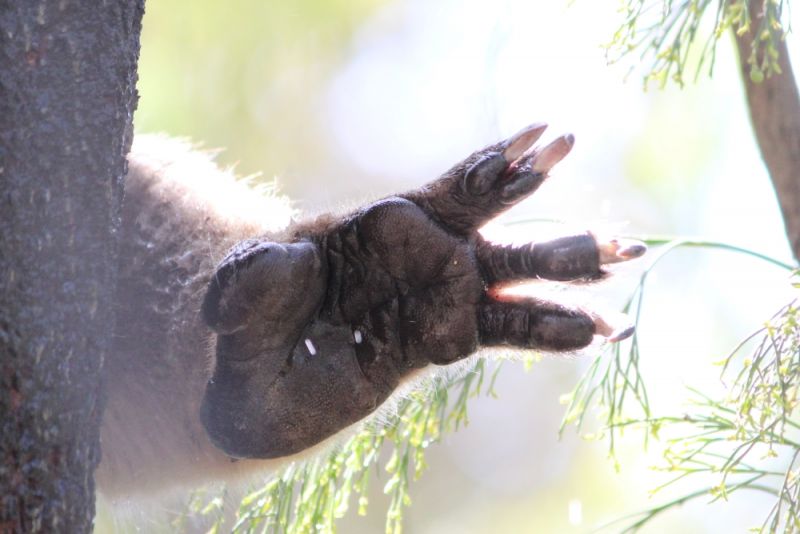 The hindlimbs of many marsupials (in this case a koala) feature fused digits, a phenomenon known as "syndactyly". These grooming claws may have evolved to help marsupials rid themselves of noxious parasites like ticks. Image: Wikimedia Commons.

Things get even more complicated when we begin to think about transitional forms and borderline cases….so complicated in fact that we will need to leave a full discussion of them for another blog post! In the meantime, your homework is to think about venomous snakes – call it a thought experiment. Some snakes, like taipans, bite and release their prey. The prey is quickly overcome by the venom they inject, making it safe and easy to swallow. Many other snakes (for example some tree snakes), however, don’t release their prey at all – they bite and hold on for dear life, wrapping coils around the unfortunate critter, grappling with it as they do their best to inject toxins. Perhaps these toxins do not kill the prey at all, but weaken it enough for the snake to overpower it, a feat the snake would be unable to accomplish without the aid of its chemical weapons. At the end of the day, both the taipan and the tree snake are using their toxic secretions for the same purpose – to secure a meal. Are they both “venomous”? Send us a message and tell us what you think.

Is this radiated rat snake (Coelognathus radiatus) venomous? Again, it depends on who you ask. Check in on Part 2 of "which animals are venomous?" to see why deciding which snakes and lizards are venomous can be tricky. Image: Timothy Jackson.

In part two of “which animals are venomous?” we’ll take a look at “Toxicofera”, which is the clade of lizards that includes all venomous reptiles (yes, snakes are lizards!) alive today. In doing so we’ll see why debate has sprung up in recent years regarding which lizards - those with legs and those without - are venomous. We’ll see that determining which reptiles are venomous presents a unique challenge, because their venom delivery systems  (teeth and glands) are extremely diverse. A helpful way to think about this is in terms of “paradigmatic” and “marginal” venom systems. Paradigmatic venom systems are those which are unquestionably for delivering venom, whereas the function of marginal systems may be more difficult to ascertain. As I touched on last week in discussing viruses, thinking about these sorts of borderline cases can teach us a lot about nature, as well as the systems we use to classify it.

Thanks for reading - stay tuned for part 2!