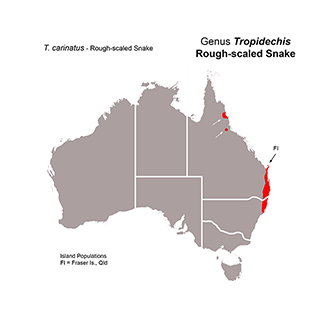 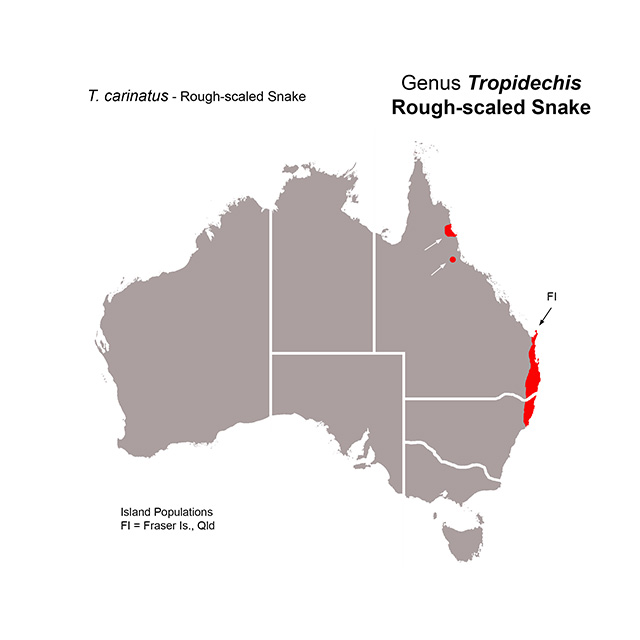 The rough-scaled snake is a close relative of the tiger snake (Notechis scutatus), with similar venom that causes a similar pathology in bite victims. It has a reputation for being highly aggressive, however, though it will certainly bite if interfered with, it will generally flee rapidly from perceived threats and a large percentage of bites from this species have been to snake collectors and people intentionally handling the snake. It is unusual amongst Australian venomous snakes in having, as its common name indicates, keeled scales. It is an active nocturnal forager that primarily feeds upon frogs, including tree frogs, and is an adept climber.

Distinguishing characteristics: Relatively slender with a rounded head and large eyes with round pupils, keeled scales (see species account below).

Venom composition: The venom of the rough-scaled snake is similar to that of the closely related tiger snake (Notechis scutatus). Accordingly, the dominant clinical pathology resulting from bites by this species is venom-induced consumption coagulopathy, caused by procoagulant toxins. Less commonly, the venom may cause neurotoxicity and myotoxicity. At least one fatal envenomation can be definitively attributed to this species and bites should be considered medical emergencies.

Activity: Nocturnally active but sometimes observed basking during the day. Rough-scaled snakes are secretive and generally flee from potential threats, but are willing to bite if molested.