This snake is the only venomous snake found above the snow line, and may be active in weather generally considered too cold for snakes. It hunts during the day, except on hot days, when it is active at night.  Copperheads are attracted to swamps, rivers and creeks, where they hunt for frogs, reptiles and small mammals.  They also eat other snakes, including their own young.

The copperhead is solidly built, with a small head.  Coloration is variable, from dark brown to light copper., with a light abdomen. Juveniles (and sometimes adults) may have a dark stripe on the  back and a collar on the back of the neck.  A red stripe is sometimes present on the flank  The lip may be striped in white and brown.  Average length is 1.2m, maximum 1.83m.  The litter of 18-20 is born alive, and are lighter in colour than adults. Bites to man are rare, as copperheads are generally slow to strike and may be inaccurate. 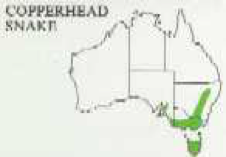 This snake is limited to Victoria, Tasmania, the highlands of New South Wales and possibly the southern parts of South Australia, including some Bass Strait islands.

It produces an average venom yield of 26mg (maximum 85mg).  The venom has neurotoxic, procoagulant and myolytic activity, but rarely causes fatalities. Envenomations may be effectively treated with tiger snake antivenom.
(This snake should  not be confused with the north American copperheads, of the Agkistrodon genus.)