AVRU Blog Launch: What is venom?

Here at the Australian Venom Research Unit (AVRU), we are passionately committed to the idea that scientists have a responsibility to the broader community to communicate information from their field in ways that are understandable and engaging (and hopefully even fun!) for non-experts. With this in mind, we've decided to start a blog about all things venom and related subjects. Once or twice a week, we'll post content here and share it across our social media platforms. A bandy bandy (Vermicella annulata) from eastern Australia. This snake is generally considered harmless to humans, but is nonetheless "venomous" (see below). The bandy bandy uses its venom to subdue its favourite prey - blind snakes. Photograph by Timothy Jackson.

The articles will vary in style and content, from pieces about key concepts relevant to the field of toxinology (the study of toxic substances made by organisms), to fact-filled descriptions of particular groups of venomous critters (look out for this Thursday's piece by Dr Andrew Watt, introducing you to the wonderful world of jumping spiders), to pieces designed specifically for children.

Today, we're kicking things off with a piece by Dr Timothy Jackson about our core subject material - venom itself. We all know that there are venomous snakes, spiders, and other creepy crawlies, but have you ever sat down and considered what exactly "venom" is, and why all those animals produce it? This article is probably best for people from the age of 12 on up, but we'll be making a version of it for the little ones in the near future. Be sure to check back weekly for new content.

All organisms, from single-celled critters like bacteria through to plants and animals, produce secretions. We humans are no exception, of course – as complex multicellular animals we are secretory powerhouses. Your spit (saliva) is a secretion and so is your snot (mucous), as well as your sweat. Secretions can seem gross, but excretions are even worse –excretions are all about waste removal, for example the excretion of urea (nitrogenous waste) in urine. Secretions, on the other hand, have a diverse range of very specific purposes – functions for which they evolved. The primary functions of saliva are the lubrication and pre-digestion of food; mucous (including snot) functions to protect the vulnerable cells in our airways, guts and elsewhere from infection; and sweat helps cool us down.

Venom is a secretion, and like other secretions it has a specific range of functions. In fact, venom is defined by its functions – it’s a secretion produced by one organism in order to subdue or deter other organisms. Many organisms produce toxic secretions, all of which may be referred to in a very general way as “poisons”. Many poisons have evolved to help defend the animals and plants that make them from their predators, but often the predator has to attempt to eat the poisonous creature before the defensive secretion can do its job. Venom is a bit different – it is that specialised subset of poisons which is actively delivered, usually by a bite or a sting. A venom is therefore typically associated with a specialised delivery mechanism – think of the fangs of a venomous snake or spider, or the stinger (the “telson”) of a scorpion. So, the formal definition of venom is that it is a secretion that is actively delivered by one organism (the venomous critter) to another, in order to either subdue (if it’s prey) or deter (if it’s a predator or competitor) the target organism. In future articles we’ll discuss examples of these various uses of venom in more detail. 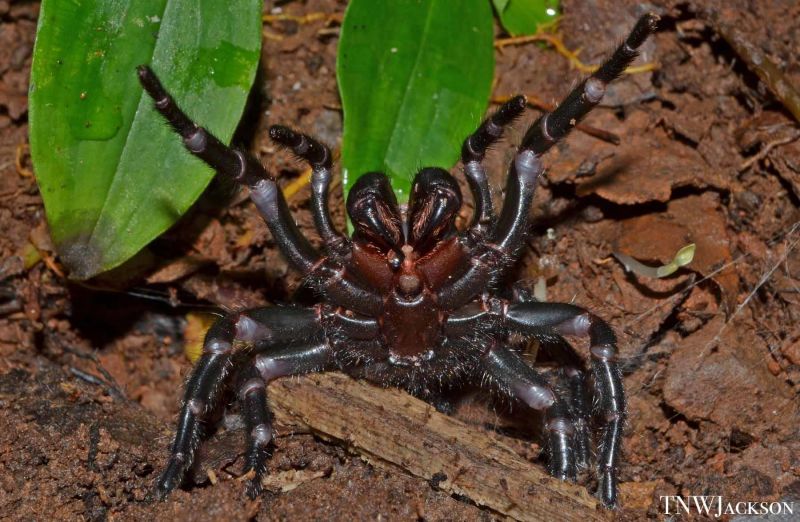 A funnel web spider (Hadronyche sp.) from southeast Queensland, in characteristic threat display. Note the large drop of clear venom at the tip of the spider's right fang. Funnel web spiders are often referred to as the world's most dangerous spiders, because their venom is highly toxic to humans. The Sydney funnel web (Atrax robustus) is the most medically important species and 13 fatal bites to humans have been recorded.  Thankfully, we haven't had a death from funnel web spider bite in Australia since 1981, when funnel web antivenom was first developed by the founder of the Australian Venom Research Unit, Dr Struan Sutherland. Photograph by Timothy Jackson.

We can start to think more deeply about venom by considering one of our most familiar secretions – saliva. In some groups of venomous animals, venom is actually quite closely related to saliva, which is itself closely related to mucous. Human saliva is produced in special glands in our mouths. It has multiple functions, including pre-digesting our food and conditioning our teeth. Our saliva contains enzymes, which are special proteins that help us to break down certain molecules in food. The most common enzyme in human saliva helps to break down more complex carbohydrates into sugars. This process is called pre-digestion, because it’s the same sort of thing that happens in our guts, only our guts secrete a much wider range of enzymes, as do some of the microscopic organisms that live there (our gut microbiome). From our saliva to our stomachs, these secretions all contribute to the digestion (breaking down) of the different food we eat. A giant centipede (Ethmostigmus rubripes) from northern Queensland, protecting its eggs. Centipedes are venomous, and their "fangs" are actually modified legs on either side of their mouths. Like many venomous organisms, they will use their venom to defend themselves, as well as to catch food. Centipedes are voracious predators, and large ones like this will even eat small mammals and reptiles, as well as the insects and other invertebrates which are their typical prey. Photograph by Timothy Jackson.

In some groups of venomous organisms, most notably snakes but also some venomous mammals like shrews, venom is produced by specialised glands in and around the mouth (oral glands), just like saliva. Perhaps it’s not surprising therefore that one of the functions venom has for these animals is shared with saliva – pre-digestion of food. However, venom must do much more than aid in digestion in order to be considered worthy of the name, so we don’t consider pre-digestion one of the true venomous functions. It might surprise you, however, that venom achieves its true purposes in a similar manner to saliva. Just as saliva contains enzymes that help break down food, venom contains many enzymes and other proteins that help it to fulfil its function. Venom is, in fact, a mixture of many such “biologically active” components, which we call toxins.

There are many kinds of toxins that work in many ways, and a single venom may contain a wide variety of these components. All toxins work, in one way or another, towards the primary goal of venom as a whole – subduing or deterring other animals. Broadly speaking, toxins achieve this  purpose by disrupting the normal workings of the target organism’s body. One of the shared features of all organisms is that they must work hard, against their environments, in order to maintain stability – environments are constantly changing, but to stay alive an organism must protect its sensitive inner workings from this change. Barriers, from cell walls to skin, are a key part of this process. Inside those barriers, all organisms are like incredibly complex factories, with huge numbers of processes constantly working together with the ultimate goal of maintaining a stable state. These processes are collectively known as “homeostasis” – homeo means “the same” and stasis means “staying”, so homeostasis just means “staying the same”. The purpose of venom, achieved through the actions of toxins, is to disrupt the homeostasis of the target organism, in order for the producing organism to secure a meal or escape a threat. In future blog pieces, we’ll be going into much more detail regarding the activities of toxins. 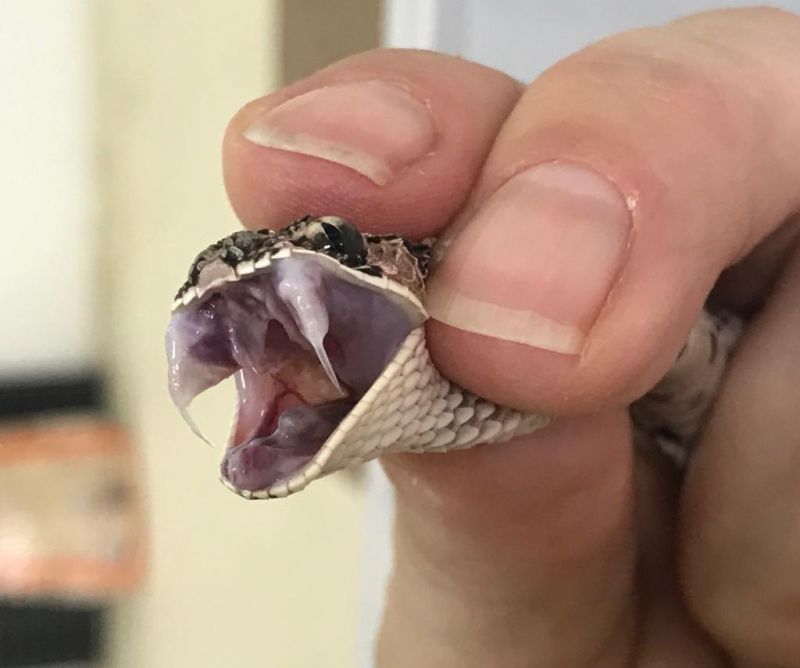 A baby puff adder (Bitis arietans) from Kenya, showing off its impressive fangs, which allow delivery of venom deep into the muscle tissue of prey animals such as lizards and small mammals. Puff adders are one of the most dangerous snakes in Africa, where they are distributed across much of the continent south of the Sahara desert. These snakes are ambush hunters and may sit, well-camouflaged, by the side of walking paths, waiting for potential prey animals to pass. Bites to humans are typically defensive, occurring when people accidentally tread on the snake or too close to it for (the snake's) comfort.  In contrast, most Australian snakes will move away when they realise someone is getting close. Nevertheless, it's always a good idea to wear sturdy footwear and long pants in places where snakes might occur. Photograph by Timothy Jackson.

By now you should have a reasonable idea what venom is. It’s a secretion, produced by specialised tissue (such as venom glands), associated with a specialised delivery mechanism (such as fangs or a stinger) and actively delivered to a target organism in order for the venomous critter to secure a meal or defend itself. Before we finish, it’s also important for us to note what it isn’t. A common misconception is that “venomous” means “dangerous to humans”. In fact, the vast majority of the world’s venomous organisms are completely harmless to humans, either because they rarely if ever bite or sting them, or because the consequences of those bites or stings are minor. Bees are venomous insects which are dangerous to a few people, because of allergic reactions, but not to most. Almost all spiders are venomous, but only a few species are capable of making people sick with their bites. There are many dangerously venomous species of snake, but actually the majority of venomous snakes pose no threat to humans whatsoever. Remember, classifying an organism as venomous is making a judgement about how it uses a particular secretion in its own life and has nothing to do with whether or not that organism might be dangerous to humans. There are also very few, if any (we will discuss unusual cases in future) organisms which use their venom to attack people. Almost all venomous injuries sustained by people, including the vast majority of snakebites, are defensive, on the part of the venomous animal. Most venomous animals are very small, compared to humans, and we seem like large predators to them (indeed we often are large predators). Since one of the functions of venom is defence, it’s not surprising that if a venomous animal feels sufficiently threatened by a human it might bite or sting them in defence. These injuries, which can indeed be very dangerous, are best viewed as unfortunate accidents, the majority of which (particularly in Australia) can be avoided by taking an interest in and learning about the behaviours and life histories of venomous organisms. That’s what this new blog by the Australian Venom Research Unit team is all about, so stay tuned!

Thanks for reading, stay safe and keep up the social distancing,