The tale of Toxicofera, part 2

Like any evolutionary tale, the tale of Toxicofera is a tale of transitional forms. These links are preserved not in fossils, but in living organisms and their genes. To continue telling it, we’re going to need to invoke some concepts from the modern evolutionary biologist’s toolkit.

Quick recap of part one to kick off part two! “Toxicofera” is the clade that contains all venomous species of reptile, or at least all venomous reptiles alive in the world today (there’s some debate about whether certain dinosaurs were venomous). The clade includes three groups – the iguanian lizards, anguimorph lizards, and the snakes. If you don’t know what iguanian and anguimorph lizards are, don’t worry, we’ll be talking more about them next week (but see part one, too). For a long time, it was thought that only certain groups of snakes and a couple of species of anguimorph lizard – the gila monster (Heloderma suspectum) and Mexican beaded lizard (Heloderma horridum) – were venomous. Recent work, however, has suggested that venom might be a much more widespread trait amongst members of the Toxicofera – a controversial assertion that is behind the clade’s name, which means “toxin having”. A trait that all members of the group share is oral glands with ducts that deposit their secretions at the base of the teeth, these glands are known as “dental glands”. OK, we’re up to speed, so let’s go…..to Ancient Greece? 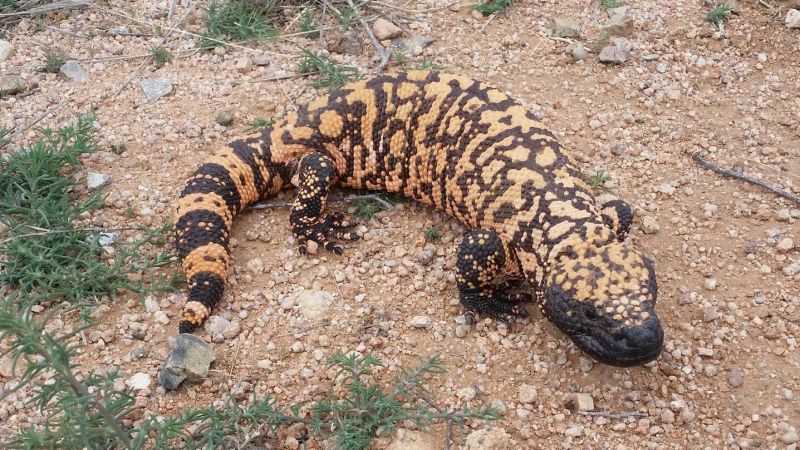 The gila monster (Heloderma suspectum) is a venomous anguimorph lizard. Its beautiful colouration is likely "aposematic" - a warning to would-be predators of its toxic bite. A peptide from the venom of the gila monster was developed into the diabetes drug Exenatide, an example of the biodiscovery potential of the pharmacologically active molecules that comprise venoms. Image: Wiki Commons.

According to the Ancient Greek philosopher Plato, the task of a natural philosopher (what we moderns would call a scientist) is to “carve nature at the joints”. Plato believed that nature was composed of discrete categories and that it was the job of those who study nature to identify these categories and group phenomena accordingly. It’s a nice idea, but what if nature isn’t quite as neat as Plato thought? What if nature is messy, composed of phenomena that blur into one another and refuse to submit to our ancient desire to wrap them up in tidy packages? The more closely we look at nature, the more we see that it is composed of continua. Plato was an essentialist, which means that he believed that things have an unchanging “essence” which makes them the kinds of things that they are. The opposite of essentialism is evolutionism, the idea that all things are in flux – nothing is exempt from the processes of change and therefore there are no unchanging essences. Today, biology is a thoroughly evolutionary science and we understand that nature is indeed a constantly shifting tapestry. Evolution never stops. New branches of the tree of life bud continuously and diverge from old lineages; some rapidly disappear, while others go on to form mighty limbs composed of thousands of novel species with novel attributes. All this metamorphosis leaves behind a record in the relics and transitional forms that allow biologists to reconstruct the evolutionary history of life on our planet – the great story of how all that was came to be all that is and ever will be. 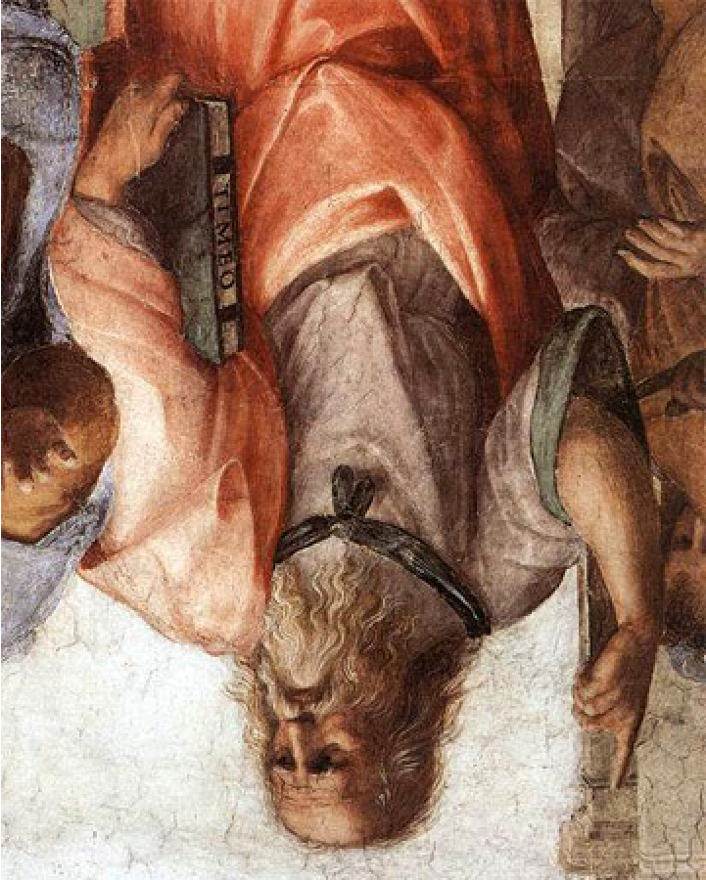 The evolutionism endorsed by modern science turns Plato's essentialism on its head. Sorry Plato (we still love you)! Image: detail from Raphael's fresco "The School of Athens" - Plato's visage is based on Leonardo da Vinci.

Like any evolutionary tale, the tale of Toxicofera is a tale of transitional forms. These links are preserved not in fossils, but in living organisms and their genes. To continue telling it, we’re going to need to invoke some concepts from the modern evolutionary biologist’s toolkit. In doing so, we’ll see why an insistence on following Plato’s agenda – an insistence that there must be definite boundaries between categories – can lead to confusion and controversy about where exactly those boundaries should be placed.

You can’t get something from nothing. This is one of the central lessons of evolution – the future is built from the past; new traits are built from pre-existing traits. Sometimes a trait that has a particular role in an organism’s life has features that are potentially useful for another role. Perhaps these features have been sculpted by natural selection for one task, but are, by chance, useful for another. Perhaps these features haven’t been sculpted at all but are developmental “accidents”. Regardless of their origin, these properties “exapt” the trait for a new role. The textbook example of exaptation is feathers, which originally evolved as insulation for endothermic (“warm-blooded”) dinosaurs, preventing them from losing too much of their body heat to the environment. Heat is energetically costly to make, so insulation, from feathers to fat to fur, is a common trait amongst animals that produce their own warmth. Feathers, despite continuing to function as insulation, were later “co-opted” for use in flight. Palaeontologist Elisabeth Vrba (along with her famous colleague Stephen Jay Gould) contributed the term "exaptation" to the vocabulary of evolutionary science. This indispensable concept was not new, but had previously been referred to as "pre-adaptation", a term abandoned due to implications of "foresight" - evolution does not anticipate, but makes use of whatever is at hand that can give an organism the edge in its current environment. In modern evolutionary biology, the concept of pre-adaptation goes back, like almost every other idea in our toolkit, to Charles Darwin. Image: J. Play.

The structure of feathers, designed to trap warm air close to the body and form a barrier against the cooler air outside, made them useful for influencing wind currents in another way. Whilst most feathered dinosaurs continued to enjoy the insulation their feathers provided, other dinosaurs took to the trees and their feathers enabled them to become gliding dinosaurs. Gliding dinosaurs became flying dinosaurs – think Archaeopteryx (which means "ancient wing") and relatives, not pterosaurs, which evolved flight convergently and without the use of feathers. These flyers eventually became birds – the only lineage of dinosaurs to survive the Cretaceous-Tertiary extinction event. Without feathers, the dinosaurs would be as extinct as most people think they are, instead of being a ubiquitous feature of all the world’s ecosystems. That’s right, dinosaurs did not go extinct 65 million years ago! Most lineages did, but one branch of the dinosaur family tree lives on and remains one of the world’s most conspicuous and successful vertebrate lineages. Yes, from an evolutionary perspective, birds are dinosaurs (which also makes them reptiles, of course)! So, the exaptation of an evolved structural feature of feathers had an “unintended” consequence and ended up having a massive influence on the fate of dinosaurs. 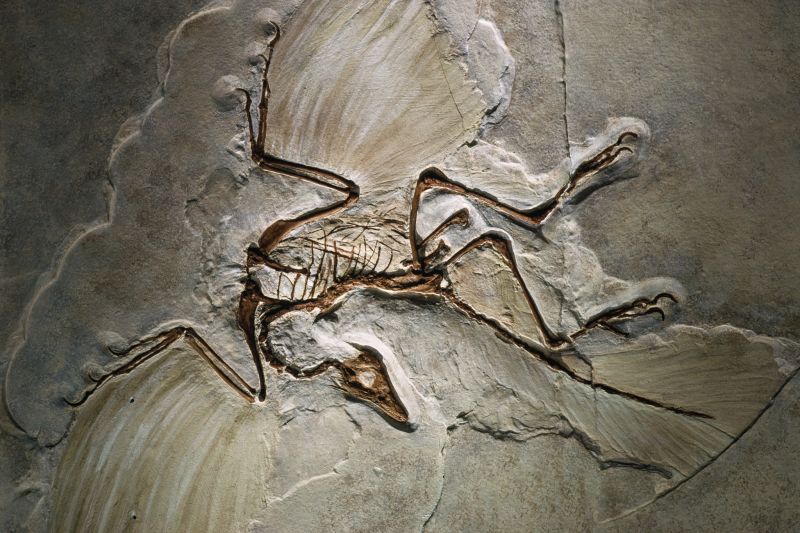 This fossil of Archaeopteryx clearly shows the feathers that adorned its wings and tail, as well as the bird-like (e.g. the wings themselves) and reptilian (e.g. the skull and tail) features of its skeleton. Archaeopteryx is thus one of the many transitional forms evident in the fossil record. They, despite their prevalence, are actually far less numerous than the transitional forms present amongst living organisms (more on that next week). Whether or not Archaeopteryx could fly remains a matter of debate, but it could glide, at the very least. Image: Wiki Commons.

How could it be any other way? You can’t get something from nothing! All new traits must have their humble beginnings as the accidental effects of other traits. It’s only once a trait starts having a particular effect that it can start playing a role in the life of the organism that possesses it and thereby begin being sculpted by selection pressures into a trait specialised for a new functional role. Venom is no different. In fact, exaptation is a crucial concept in our understanding of the evolution of venom in general, and reptile venom in particular. How did venom manage to get a foot on the rungs of the evolutionary ladder? Well, as discussed in the very first AVRU blog post, the oral secretions of lots of animals (including our own saliva) contain bioactive molecules that help to predigest food and maintain oral hygiene.

One way of maintaining oral hygiene is to produce antimicrobial substances that prevent harmful bacteria from infesting the mouth. Killing bacteria is a lot like killing cells in general, so it stands to reason that if you can inject a high enough concentration of an antimicrobial substance into another organism, you will do some damage. So, perhaps the antimicrobial molecules in typical “saliva” are exapted for use as venom? All that is required is that enough of them are produced and that there is an effective way to deliver them to a target animal. What if the molecules aren’t the only thing that might have been exapted, but also the delivery mechanism? This is where the dental glands of toxicoferan reptiles start to reveal their hidden promise. We’ll pick up our story next week with a closer look at these features of toxicoferan anatomy, which may turn out to be central to the evolution of venom within the clade….after all, if your antimicrobial or pre-digestive molecules are being secreted right at the base of your teeth, they’re that much closer to being injected into anything you bite.

I hope you're enjoying the Tale of the Toxicofera so far. Don't hesitate to get in touch if you have any questions (or criticisms!) and don't forget to check the AVRU blog page regularly for more articles.