It’s fair to say that you’re probably spending more time at home than normal right now. What with the global pandemic and increasing government mandated lock-downs. For some of us the continuous news cycle on COVID-19 is a fascinating insight into the state of the world and the systems that connect us. For others, a distraction wouldn’t hurt. So that’s what this is. It’s a little distraction. As we cocoon away into our respective homes, we thought we might take the time to introduce you to some of your more misunderstood housemates. Those venomous creepy-crawlies that tend to get a bad rap and some others that thoroughly deserve it. So, get comfy. Grab a tea, a juice or a wine if you’re old enough. And get to know, the Jumping Spiders.

No matter where in the world you live, there’s a better than average chance that you’ve come across a jumping spider. These pint-size creatures are found almost everywhere across the globe and belong to the largest family of spiders in the world, the Salticidae. All up, there’s more than 6,000 different jumping spider species and Australia’s home to over 60 of them. While that’s a lot of spiders, they’re thankfully only between 1-25mm in length, so there’s plenty of room for all of us.

Where do I find them? 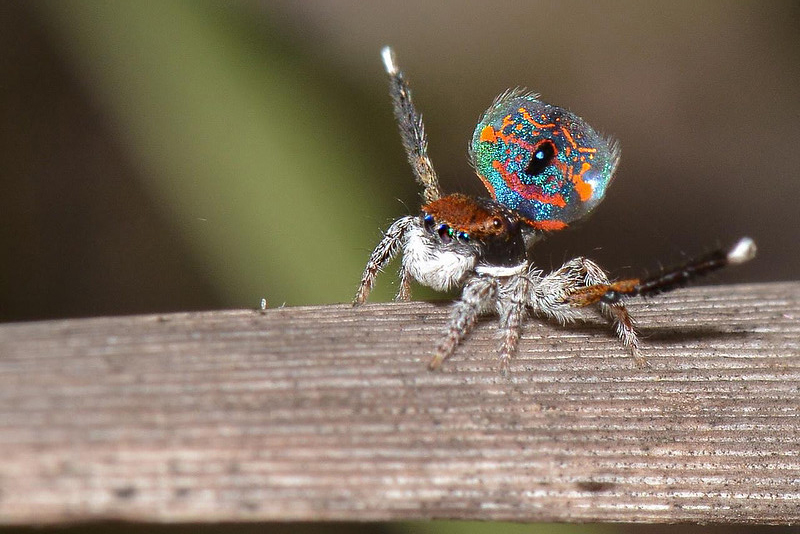 Small brown salticids can be seen living in gardens across Melbourne, while in more tropical areas you might stumble across the vibrant Maratus genus, also known as peacock spiders. The males have brightly coloured abdomens, which they use to impress their nearby female counterparts. They lift their coloured body and dance in the hope of securing a mate.

My what big eyes you have! 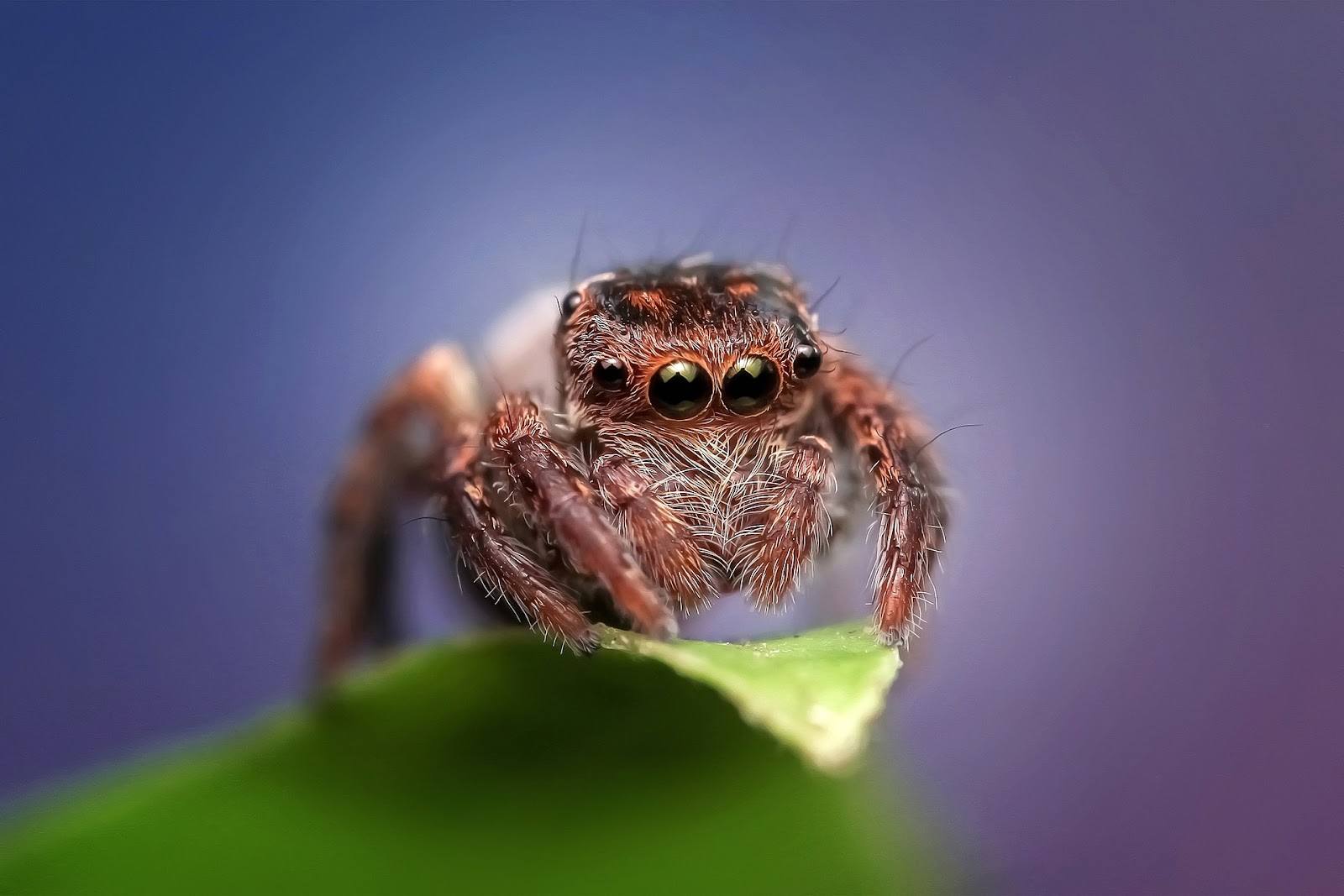 The large front facing eyes of jumping spiders make it all the better to see you with. Image: Pixabay.

Despite their small size, jumping spiders are easy to spot thanks to their large, distinct, front-facing eyes. These big blinkers are known as the anterior medial eyes (literally front middle eyes) and give these spiders some of the best spider vision around.

The front-facing eyes are backed up by three other pairs of eyes: the anterior lateral eyes (front side eyes), the posterior medial eyes (back middle eyes), and the posterior lateral eyes (you guessed it, the back side eyes). These secondary eyes act like motion detectors and provide a near 360° view of their little worlds. This is perhaps particularly important for those brightly coloured Maratus spiders, who stand out more and are therefore at greater risk of becoming a meal. 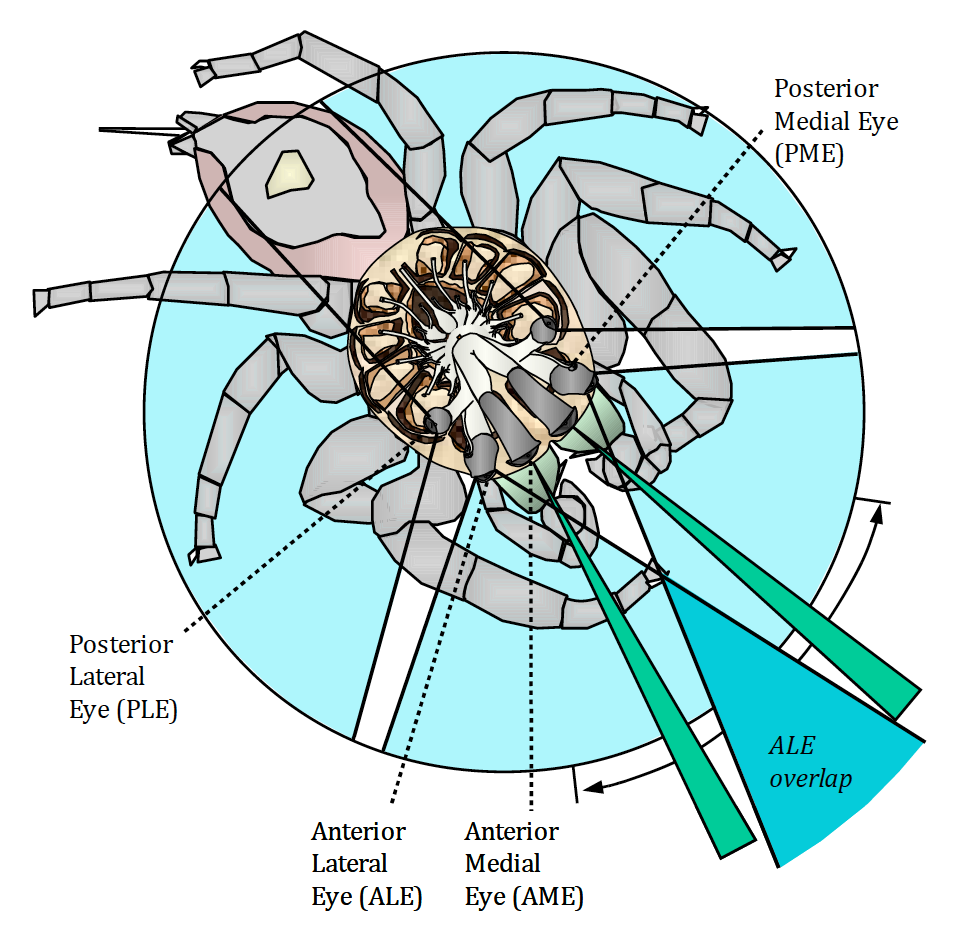 The combination of their motion-detecting secondary eyes and their highly acute front-facing eyes is why you’ll often see these little spiders spinning on the spot, trying to get a decent look at what’s going on around them. Or trying to find their next meal.

The hunt is on

The Salticidae are expert hunters. Stalking their prey across leaves, walls and everything in-between. They hunt diurnally (during the day) and use a variety of techniques to take down their prey. Some species are always on the move. Actively moving until they come across something to stalk. And then they pounce. Others take up position on a stick or a leaf and stay hidden until something passes directly beneath them. Lunging at the opportune moment. Some of the smarter species attach their web silk to a sturdy twig and use the tension to enable them to strike prey vertically or by swinging like Tarzan to ambush unsuspecting prey on the underside of a neighbouring leaf. 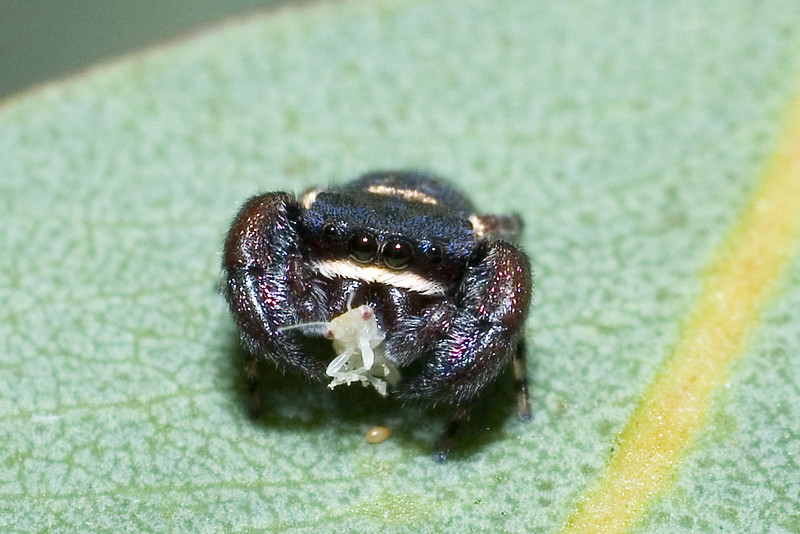 Not surprisingly, the ability to jump is central to jumping spiders’ hunting tactics.  They jump using a specialised hydraulic system which uses haemolymph (spider blood) to increase the pressure in their legs. With a sudden release of pressure, the legs are extended and the spider suddenly finds itself leaping towards its prey. This hydraulic system allows the Salticidae to jump many times their body length without the need to do leg workouts every other day. The jumping spider attaches a small silk tether before it jumps to catch it in case it falls. This also gives them the opportunity to hold larger prey in place as their venom takes hold.

What very small fangs you have

They sure do. Most spiders in Australia have some sort of venom. Perhaps the more important question for us humans is, is the venom toxic to us? With jumping spiders the answer seems to be, a little bit. 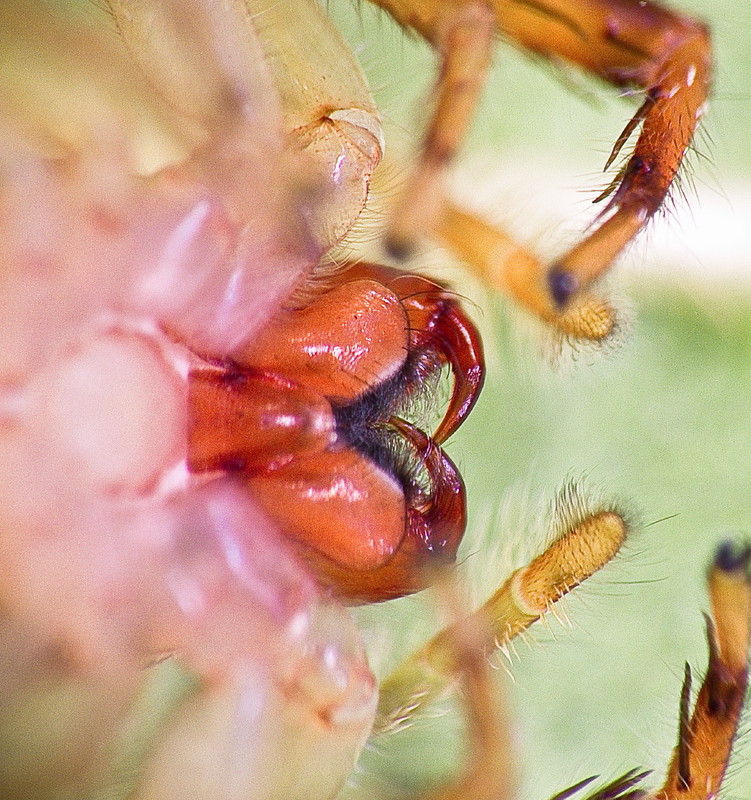 The good news is, jumping spiders are unlikely to bite. They’re much more interested in taking down a fly, grasshopper or some other invertebrate than a fully grown human. After all that’s what their venom has been designed (through evolution) to achieve.

On the off chance that you are bitten by a jumping spider, you’re unlikely to have severe symptoms. Some bites have been reported to be painful and cause localised swelling and discolouration, but these should clear within a few days to a week. More severe bites have been reported to cause lesions in rare cases. This can occur due to a specific reaction to the venom or in bites that occur when the spider feels threatened and injects more venom, for example when stuck between clothing and skin.

If you notice a bite, clean the bite site with water and soap to decrease the risk of infection and apply ice to help with pain and inflammation. And of course seek medical advice through your GP or local hospital if you’re concerned at any stage.

Let’s not jump to any conclusions

So don’t be concerned if you see these little spiders around the house. After all, they’re unlikely to disturb you and they’re pretty handy at getting rid of those insects buzzing around the house. But, if you do feel the need for some social distancing just take them outside using some card and a glass and pop them near the bushes. They’ll be happy there too. 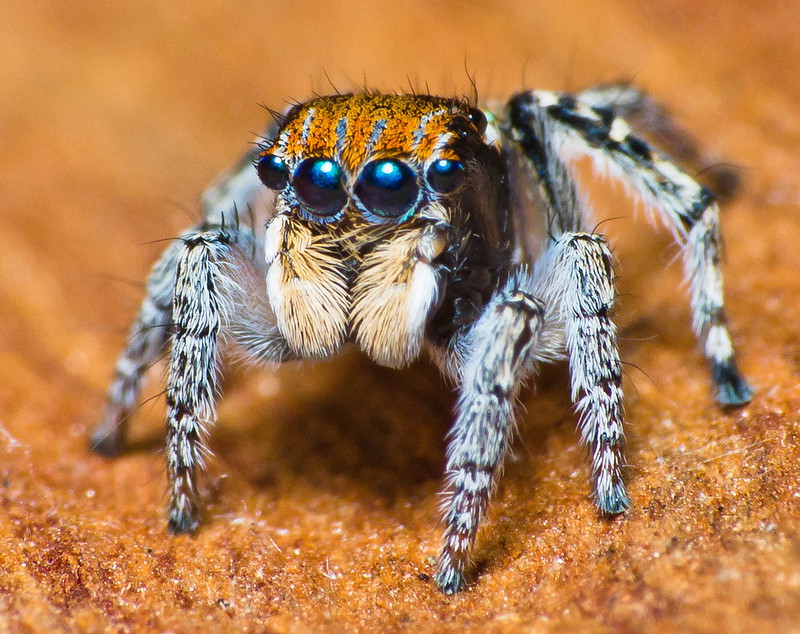 More information on Peacock Spiders and some videos of their dancing can be found in this great article over at Museums Victoria.