First aid through the ages

Each year, as the weather warms up, my bag gains a new item. A compression bandage, that’ll stay tucked away in a side compartment. There just in case the worst happens. While it’d help mend or bandage any limb following a slip or a fall on the trails near my home, it’s there on the off chance that someone gets bitten by a snake while we’re out in the bush. So far, it remains untouched and chances are it will be unused again this year. At least that’s the hope.

A decent bandage is now our go to piece of kit when it comes to snakebite first aid. But it hasn’t always been that way. Over the years we’ve used a range of strange and at times dangerous methods to treat snakebite in the field. Here we’ll start with the current best practice and then take a wander through the history of snakebite first aid in Australia. 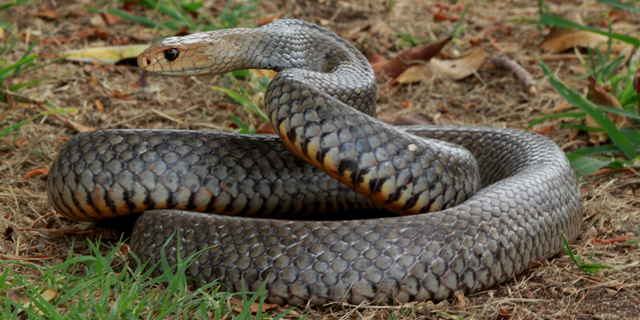 Despite their fearsome reputation, most venomous Australian snakes, like this eastern brown (Pseudonaja textilis), are unlikely to bite unless they feel threatened.

Australia’s home to some of the most venomous snakes in the world. From taipans to brown snakes, death adders and tigers, we’ve got our fair share of snakes that can pack a lethal punch. Every year upwards of 3,000 people in Australia present with suspected snakebites. This number seems high at first, but these bites include bites from non-venomous snakes, dry bites from venomous snakes and even the odd bite from a stick. A few hundred of these bites will result in serious envenomings, leading to hospitalisation and the administration of antivenom. On average, 2-4 people will die from snakebites each year across Australia. Thanks to our world-leading antivenoms and free public health care the vast majority of bite victims will survive the experience with few side effects and a new story to tell.

As the saying goes, the best snakebite is the one you avoid and there are many ways to avoid such snake-related accidents. From watching where you walk, to wearing closed toe shoes and loose fitting long pants when out in the bush. Leaving snakes alone when you see them also goes a long way in coming out unscathed. Have a look at our first aid page for a full list of dos and don’ts. Occasionally, despite our best intentions, a bite will happen. And when it does your best option is to apply a pressure-immobilisation bandage and then make your way to the nearest hospital. Ok so what’s a pressure-immobilisation technique? In simple terms, it’s a first aid technique that involves wrapping a firm bandage from the fingers/toes of the bitten limb all the way up to the shoulder/thigh. Remember, if you can’t feel or move your fingers, it’s too tight. The final step is to splint the limb with a stick, plank or something similar to limit movement. Developed in the ‘70's by Professor Struan Sutherland, the method aims to slow the movement of venom from the bite site into the circulation, and "buy time" for you to reach your nearest hospital. Research with snake venom  has shown that if firm pressure is applied over the bitten area and the limb is immobilised, less venom gets into the blood. While pressure-immobilisation was initially developed to treat snakebite, it’s also applicable for bites and stings from a number of other venomous creatures and is currently recommended for most life threatening venomous bites and stings in Australia.

For full details of the technique check out our First Aid page and our instructions on applying the pressure immobilisation technique or download the Australian Bites and Stings app to ensure you’re always prepared when you head outdoors.

Now that we've outlined the best-practice pressure immobilisation technique above, let's take a look at some of the weird and less than wonderful first aid techniques that clinically speaking are best left to history. Before the invention of pressure-immobilisation in the 1970s, Australians looking for snakebite first aid tips would more often than not turn to Eric Worrell’s Dangerous Snakes of Australia and New Guinea. Flicking through the pages, they’d come across a series of staged pictures detailing the techniques in graphic detail.  First, the application of an arterial tourniquet, then the use of a razor to slice open the bite site and finally a heated jar was used to create suction over the bite site [1]. It's fair to say that we do things a bit differently these days. And it probably goes without saying, but none of the techniques described below should be tried at home. Or out bush. Or anywhere at all really.

Let's rip the band-aid off this one right up top. Regardless of what you've seen in movies, tourniquets are no good for snakebites. In fact they can be downright dangerous.

On the surface, tying a belt or rope around a limb to cut-off blood supply seems like a semi-decent solution to a snakebite. After all no blood equals no venom circulating right? Well yes, this is technically true. The problem is that no blood also equals no blood. Cutting off blood supply to your arm and leg runs the risk that you'll do permanent damage to the limb. After all, your tissues need the oxygen and other nutrients that your blood supplies throughout the body. By removing the blood, the tissues in your limbs become starved of oxygen and slowly die. In worst case scenarios this can result in the unnecessary loss of the limb.

Sucking out the venom

Worrell recommended a heated jar while Hollywood continues to suggest just using your mouth, either way the notion of sucking the venom out of the bite site has been around for a long, long time. And while there's no doubt sucking out the venom has become firmly entrenched in the zeitgeist, it's not based on science or good clinical practice. Put simply, it doesn't work. Unless by work you mean exposes you to the risk of infection.

Let's talk this through. It takes about 45-60 seconds for your blood to circulate throughout the body and return to the heart. So even if your friend manages to convince you to suck out the venom within 10seconds of being bitten, if the venom's in your blood already, it'll be well on its way around your body before you even get started. Think of it like trying to recover a bucket of dye you've just thrown into a quick flowing stream. Even if you throw the bucket straight back in to try and recover it, the dye's going to be too far down stream to collect.

If there's venom around the bite site, there's also the chance that you'll get some in your mouth. And while the risk of envenoming through oral transmission is low. It's certainly not zero. 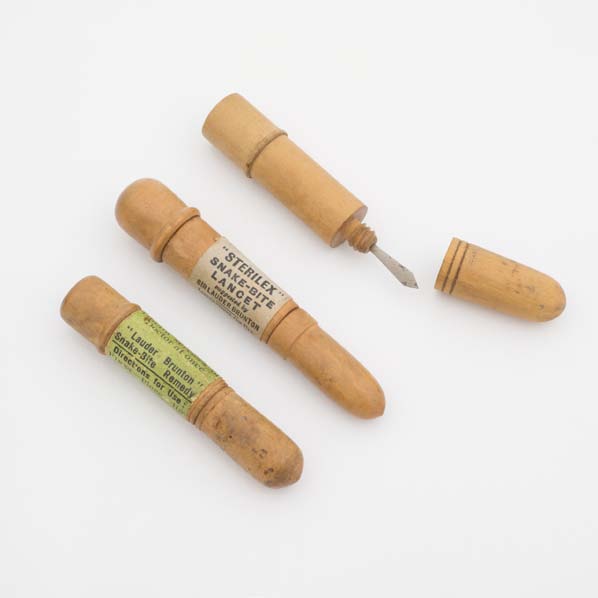 Cutting the wound is another snakebite first aid technique that seems to have caught for a time. A small incision over the bite site was often used in conjunction with sucking out the venom, known as the cut and suck technique, or with the use of Condy's crystals (see below). The technique was so widespread that specialised snakebite lancets were created which featured a blade and a small vial of crystals for use in an emergency.

Making any sort of incision at the site of a suspected snakebite is a recipe for a bad time. The additional trauma not only increases the risk of infection, but it can also result in further envenoming by exposing blood vessels and tissues to venom left on the skin around the bite site. What is a good idea, is using a pen to mark the bite site to make it easier for medical staff to find later. They can then swab the site and use a venom detection kit if needed. It's just another case of the pen being mightier than the, albeit very tiny, sword. 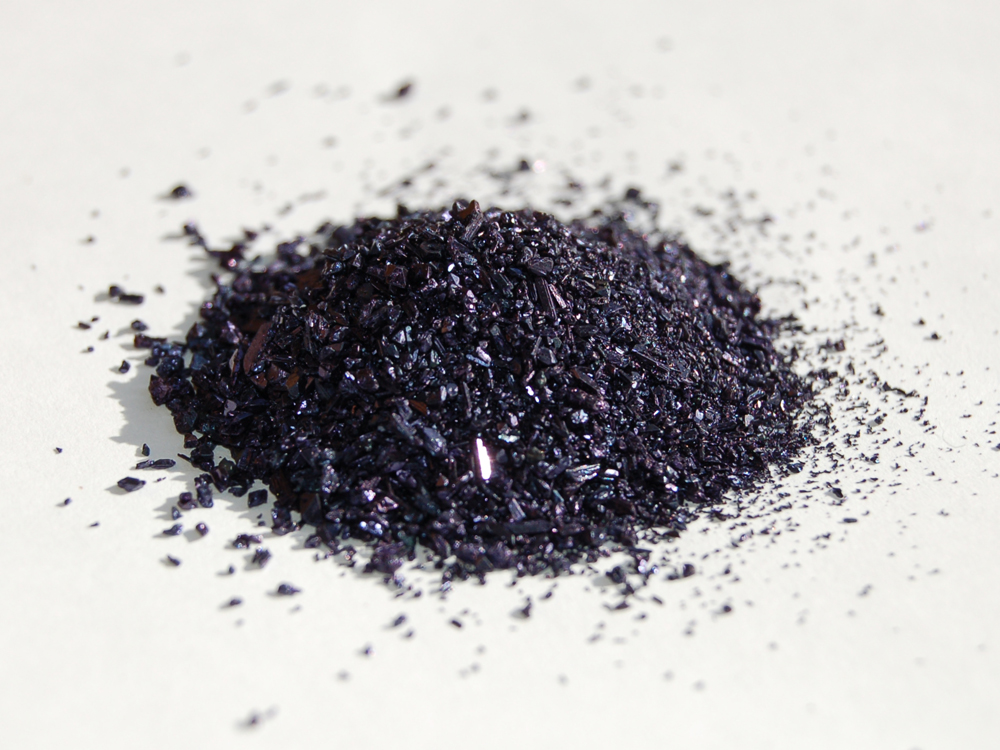 Condy's crystals, or potassium permanganate, were another staple in the first aid kits of snake catchers and scientists gone by. Just ask the British Red Cross whose 1914 first aid manual advised a bite victim to "encircle the bitten finger with finger and thumb of the other hand, suck the wound, wash it, and tie a tape round the root of the finger... The wound may be cauterised, but it is deemed more satisfactory to insert a strong solution or the actual crystals of permanganate of potash into the wound...the wound should be enlarged by a small cut with a knife... ".

The theory went that the crystals would act to neutralise the venom when added to the freshly cut bite site. Though in reality this didn't happen. While the crystals are no good for treating snakebites, you can find them on the World Health Organization's List of Essential Medicines for the treatment of skin conditions such as fungal infections and dermatitis.

While our history abounds in odd remedies for treating snakebite, our current best practise keeps things simple. A firm bandage extending from your fingers/toes over the bite site and as high up the limb as it can go is all you need. And if you don't have that? Just stay calm. Remove any jewellery from the bitten limb. Move your bitten limb as little as possible and head to your nearest hospital.