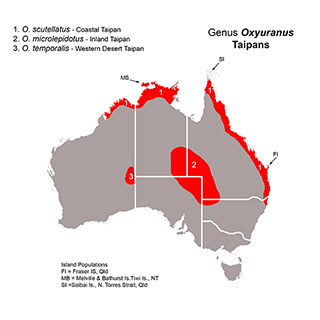 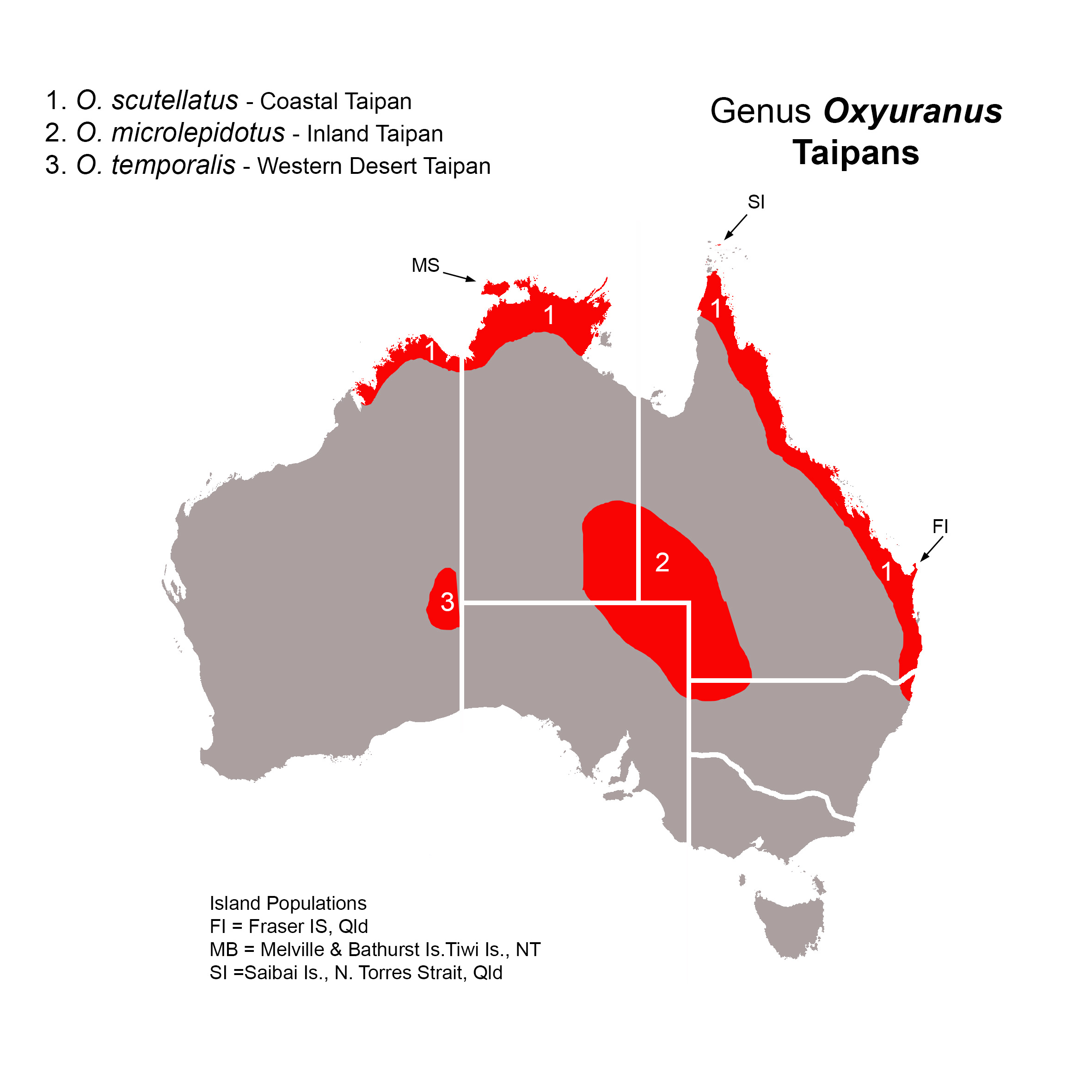 The taipans are amongst the world’s most notorious venomous snakes, with a larger-than-life reputation that rivals that of Africa’s black mambas and Asia’s king cobra. At least some of this fame is due to the fact that, in an influential study published in 1979, the venom of the inland taipan (Oxyuranus microlepidotus) was the most toxic of all snake venoms tested. Today, almost 40 years later, it retains its title as “world’s most venomous snake”. Based on the original LD50 (the amount of venom that kills 50% of mice in the study cohort) data, and multiple subsequent studies that have corroborated it, along with the documented venom yield for milked specimens, it is possible to arrive at a startling calculation – the inland taipan apparently produces enough venom to kill 250,000 mice with a single bite! Despite this alarming fact, however, the inland taipan certainly does not rank amongst the world’s most dangerous snakes, as there is not a single recorded human fatality to its credit.

The coastal taipan (O. scutellatus), on the other hand, has been responsible for numerous fatal bites in Australia and continues to be a major public health issue across the Torres Strait in New Guinea. Coastal taipans have a reputation for being highly strung and will bite, sometimes repeatedly, with little apparent provocation. It is claimed that the death rate following taipan envenomation was 100% prior to the development of antivenom, although it is impossible to verify this statistic. Such was the need for antivenom, however, that a young man by the name of Kevin Budden risked and ultimately lost his life capturing one of the first taipans to be milked; he was only twenty years old at the time of his death in 1950. Taipan antivenom was first developed in 1955 and has saved many lives in both Australia and Papua New Guinea since that time.

In 2006, a snake that was initially assumed to be a small western brown snake (Pseudonaja “nuchalis”) was caught in the desert east of the Walter James Range in Western Australia. Closer inspection revealed it to be a new species and molecular analysis confirmed that it was in fact a third species of taipan. It was formally described as Oxyuranus temporalis (western desert taipan) in 2007. Little is known of the ecology of the western desert taipan, although it apparently feeds on mammals, like the other members of its genus. No bites to humans have been recorded and preliminary analyses indicate that its venom is quite different to that of the other two taipans.

Australian species: Three, two endemic, one (O. scutellatus) also occurs in southern New Guinea. The Papuan taipan was formerly classified as O. s. canni, but given the closeness of its relationship to the Australian coastal taipan, many authorities no longer recognize this subspecies.

Diet: Primarily mammals, from mice and rats to bandicoots.

Reproduction: All three species are oviparous, the species for which documented clutches exist produce 3-20 eggs.

Venom: Taipan venoms are amongst the most potent (against lab mice) snake venoms known. The primary clinical sequelae of taipan bites to humans are neurotoxicity, mediated by pre-synaptic phospholipase A2 toxins and venom-induced consumption coagulopathy (VICC) caused by a procoagulant toxin complex. Myotoxicity, also mediated by phospholipase A2, has been documented in several cases, as has thrombotic microangiopathy, which is likely a secondary consequence of VICC.

The recommended treatment for taipan envenomation is Seqirus (bioCSL) taipan antivenom and rapid administration is critical, as both VICC and pre-synaptic neurotoxicity are life-threatening and irreversible if allowed to progress. Patients may face extended stays in hospital, including the need for mechanical ventilation, if treatment is delayed.

Preliminary studies of the venom of the western desert taipan indicate that it is markedly different in composition and activity from those of the other two species of taipan. Specifically, western desert taipan appears to contain only small quantities of procoagulant toxins and may lack pre-synaptic neurotoxins altogether. In vitro analyses indicate that the venom is neurotoxic, but that the mode of action is post-synaptic, mediated by 3-finger toxins.

Despite these differences, Seqirus (bioCSL) taipan antivenom was effective at countering the venom’s effects in vitro.

Activity: Typically diurnal and secretive, inland taipans are generally inoffensive but may bite if interfered with.

Reproduction: Oviparous, with clutches of 12-20 eggs. 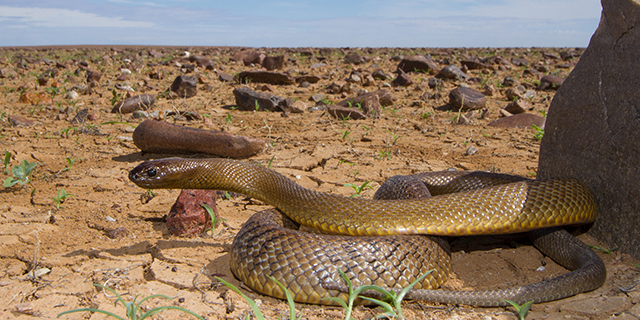 Activity: Typically diurnal and crepuscular but nocturnal in hot weather. Fast-moving and inclined to advance rapidly towards a perceived threat.

Diet: Coastal taipans are specialist feeders on small mammals, including rats and bandicoots, but may occasionally take birds.

Reproduction: Oviparous, with clutches of 3-20 eggs.

Activity: Poorly known, but apparently active in the early morning and afternoon.