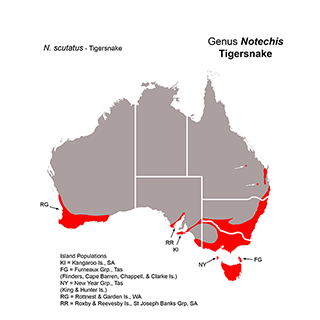 Tiger snakes are one of Australia’s most notorious species of venomous snakes. Popular legend has it that the first British settler to die from snakebite in Australia did so within hours of the First Fleet’s arrival, the victim of a tiger snake. Tiger snakes used to be abundant throughout their range and were responsible for a majority of human snakebite in Australia. More recently, however, human modification of the environment, chiefly for agricultural purposes, has resulted in a decline in the numbers of this species with a concurrent rise in the numbers of eastern brown snakes (Pseudonaja textilis), the species now responsible for most bites. Tiger snakes are very variable in colour and, despite the name, are often unbanded. Many regional variants exist, including insular forms, and these vary in colour and pattern as well as diet and general ecology. Contrary to perceived wisdom, tiger snakes are not aggressive, although they will bite if interfered with.

Australian species: One, endemic. Previously two species were recognized: Notechis ater, with 17 dorsal scale rows, from south-western, and southern mainland Australia, Tasmania and offshore islands, divided between up to five subspecies, and N. scutatus, with 19 dorsal scale rows, from south-eastern mainland Australia. Today most authors recognize only the single species and do not recognize any subspecies.

Venom: Tiger snake venom contains a potent procoagulant toxin that causes venom-induced consumption coagulopathy (VICC) in bite victims. This life-threatening pathology is the most common serious consequence of snakebite in Australia. The venom also contains pre- and post-synaptic neurotoxins and systemic neurotoxicity occurs in approximately one third of bite cases. Myotoxicity occurs in a small percentage of bite cases, the result of enzymatic phospholipase a2 toxins in the venom. Despite variation in the ecology of tiger snakes among regional and life history variants, no significant variation in venom composition has yet been demonstrated, although minor variations in the relative concentration of toxins have been reported. 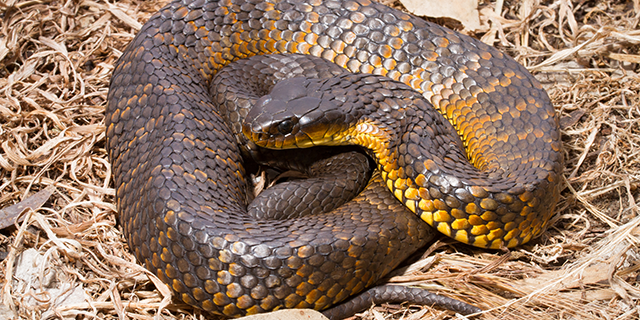 Activity: Diurnal or crepuscular but nocturnal in hot weather. Threat posture consists of curving the body concavely and flattening the neck and anterior body into a hood.

Diet: Tiger snakes are generalists, although considerable variation in diet occurs amongst populations. Mainland tiger snakes predominantly feed on frogs and lizards, and occasionally feed upon small mammals and birds. In Tasmania, tiger snakes include larger quantities of mammals and birds and their diet, and insular populations are opportunistic – some feed exclusively on scincid lizards (the only available prey) and others take advantage of seasonally available food sources and gorge themselves on mutton-bird chicks.

Reproduction: Ovoviviparous, with litters 17-23 neonates with a record of 109 recorded.

Status: Populations in the Flinders Range, SA, and on Chappell Is, Tas. are listed as Vulnerable.