Published in Cell Reports this week, the research findings are expected to have widespread applications across brain research – and may help reveal new information about the brain.

Unravelling the complexity of neural circuitry in the mammalian brain is a major goal in neuroscience research. 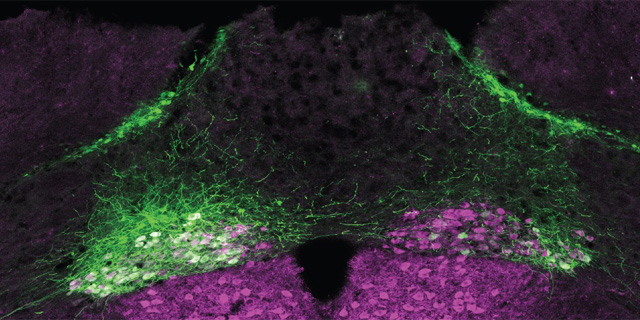 “While approaches have been developed that enable regulation of neuronal activity using light (optogenetics) or designer drugs (chemogenetics), neither of these techniques provide information about the neuronal connections responsible for controlling the neuron’s activity,” said Prof Andrew Allen from the Department of Physiology.

“Finding an approach able to do this may unlock questions that still puzzle neuroscientists, such as what causes a cell group to become active during a particular behaviour or disease state?” he added.

“Using a viral vector delivery system, we were able to ‘engineer’ neurons to express a normally inactive insect neuropeptide, called allatostatin, to turn chemogenetic allatostatin receptors ‘on’ or ‘off’ in a specific cell group. By controlling which neurons express allatostatin and its receptor, we’re able to map the neural circuitry connecting cell groups and, most importantly, understand how that circuit is working to control particular behaviours,” explained Prof Ross Bathgate from the Department of Biochemistry and Molecular Biology and Florey Institute of Neuroscience and Mental Health.

The team took the approach to an animal model where they inhibited neural pathways known to relay information from the gastrointestinal tract to the brain to regulate bodyweight control. The animals showed reduced body weight for the length of the study, validating the chemogenetic approach and demonstrating its potential to control neuronal circuit function long term. This opens further prospects to understanding how obesity might be treated.

“No doubt this technique has applications beyond what we currently realise that will shed light on many different neural systems in health and disease states. We hope it is picked up and used widely in the science community to make further discoveries,” said Prof Bathgate.

(Article originally published by the Florey on 15 September 2020).

The research was also featured in Pursuit.