During a continuing collaboration with Stephen Kent the pair have prepared HIV DNA, protein and viral vectored vaccines assessed in a lentiviral infected animal model. Safety of the SIV and HIV vaccines was carried out and resulted in the vaccines expressing modified HIV antigens. This lead to a pre-clinical safety phase I trial of DNA/rFPV vaccines in collaboration with Kelleher and Cooper. Through the development of the Australian "HIV reference reagent program" as one of the co-founders, Purcell has generated and supplied many HIV research reagents to the HIV community including Lewin for the development of her latency models.

Most successful viral vaccines stimulate protective antibodies. From this we have prepared candidate vaccines expressing an authentically structured oligomeric HIV-1 Env gp160 surface spike which elicited broad HIV-neutralising antibodies. This work involved the preparation of highly expressing soluble trimeric Env gp140 cell lines to utilize the RNA elements located in the native env RNA and preserve its natural functionality. During primate pilot-vaccination studies the antibody response was not sufficient to prevent infection or reduce the onset of disease. To combat this, Env oligomers were prepared that better exposed the structured functional parts common to all HIV strains. These highly conserved neutralization epitopes from pre-seroconversion strain Env elicit a broad neutralizing antibody response in mouse vaccination studies.

Another alternative approach involves the targeted mutagenesis of the N-linked glycosylation sites of HIV Env gp140 to expose key functional epitopes shared by widely divergent strains. The identification of memory B-cells containing an immunoglobulin receptor for HIV-1 Env would be ideal to allow molecular genetic dissection of the humoral immune response.

A current major focus of this work is directed toward HIV vaccine development. Infection with HIV is initiated when the HIV envelope protein mediates binding of the virus to a target cell. Our aim is to harness the power of protective antibodies that can bind to the envelope protein and block target-cell recognition and subsequent infection. 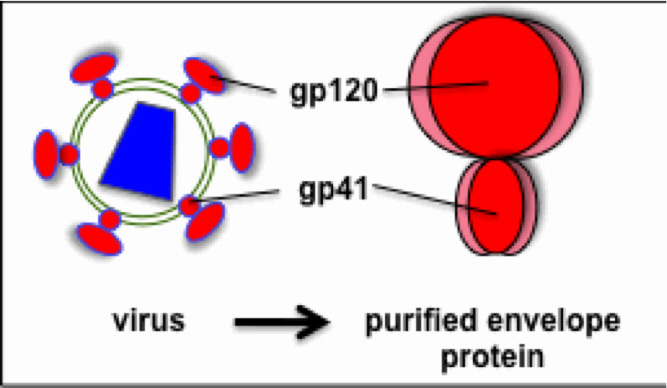 Vaccines often generate better immune responses when two different vaccine modalities are used in so-called prime/boost strategies. We have used DNA vectors expressing envelope protein for the first vaccination (prime). One aspect of our work involves improving the design of our DNA vectors to increase the efficiency with which they prime the immune system. Purified protein is used to boost the immune response boost. The functional HIV envelope protein is composed three gp120 subunits and three gp41 subunits as shown in Figure 1. This structure, known as a trimer, is an important element in the way the human immune system recognizes the envelope protein. We have developed the tools and techniques to purify envelope protein trimers for testing as vaccines. A hurdle to an HIV vaccine is the variability of many parts of the envelope protein between different viral strains. By manipulating the envelope protein to expose the less variable regions we hope to generate antibodies capable of blocking infection caused by diverse HIV isolates. These strategies will be utilized for preventative vaccine development and for producing antibodies that may be used in a topical microbicide.