The importance of HIV-specific Antibody-dependent Cellular Cytotoxicity (ADCC) antibodies that inhibit viral replication mediated through the Fc receptor is becoming clear. In view of the difficulty of inducing broad neutralizing antibodies and effective T cell immunity, exploring HIV-specific ADCC is a priority. HIV-specific ADCC has been under-explored both from the point of view of rapid, reliable assays to measure and characterize ADCC responses and the ability to specifically induce high level HIV-specific ADCC antibodies by vaccination. Recent data from our group233 from the RV144 vaccine study in Thailand suggest a role for non-neutralising antibodies in protection from HIV. 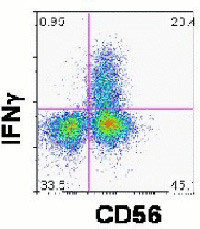 Figure 1: CD56+ CD3- Natural Killer lymphocytes expressing IFNϒ in response to HIV+ serum and ADCC peptide epitope within Vpu. No IFNg is expressed to no peptide, an irrelevant peptide, or the absence of IgG.

We have identified a simple flow cytometry technique to identify HIV-specific ADCC responses and map ADCC epitopes. In its simplest form, small volumes (200ul) of whole blood from HIV-infected subjects are stimulated for 6hr with Env protein or overlapping Env 15mer peptides (or whole Env proteins), and CD56+ NK lymphocytes assessed for expressing the cytokine IFN-y and/or the degranulation marker CD107a. The activity is mediated by IgG antibodies in plasma and the assay can be performed on stored plasma samples using donor blood or PBMC as effector NK cells. The ADCC epitopes can readily be finely mapped to individual peptides from within an overlapping set. The ability of the HIV-specific ADCC antibodies to trigger "polyfunctional" NK cells (e.g. express TNF-alpha, degranulated perforin or granzymes, express chemokines) is also readily monitored in this assay since the NK cells can be accurately gated on. We showed ADCC antibodies trigger very rapid activation of NK cells99, which could be important in limiting virus spread. We are now endeavouring to isolate specific ADCC antibodies and identify the most effective antibodies to use in passive transfer studies.

Exciting data from Dr Amy Chung shows that HIV-specific ADCC responses can force immune escape. This strongly suggests ADCC applies significant pressure to HIV. This was published in PNAS120 * and attracted some media interest with reports appearing in The Age and Science Illustrated amongst others. We also found that people with HIV that progresses more slowly to AIDS have enhanced ADCC responses to specific parts of HIV. 137,166,236 * Dr Matt Parsons has studied the role of NK cells in the ADCC process126 *. Dr Wen Shi Lee and collaborators at the Alfred hospital are investigating how ADCC might help clear cell with latent HIV and thus help in the search for a HIV cure. 196,235,244 * We have also collaborated with the National AIDS Research Institute in India to study ADCC immunity to HIV. 216,222 *  We are collaborating with Drs Mark Hogarth and Bruce Wines at the Burnet Institute to study novel Fc-receptor dimers to simplify further the measurement of ADCC to HIV and influenza267, 236, 233 *.