We remember the well-known and respected neurobiologist, who continued working until shortly before his death in early June.

We have lost a great and much-loved contributor to pharmacology and biomedical sciences at large.

Professor Geoff Burnstock was born in London on 10 May 1929 and died in Melbourne on 3 June 2020. He was an outstanding scientist with a strong connection with and love of Australia. He was proud to have become and to remain an Australian citizen. Professor Burnstock with the Macfarlane Burnet Medal in 2018.

“I had the wrong background, the wrong accent, the wrong clothes, but I got into biology at King’s College which was the closest thing to medicine. And then I did my PhD at University College London,” he said. “I later worked at Oxford and then went to America on a Rockefeller scholarship.”

He was appointed to a Senior Lectureship in Zoology at the University of Melbourne in 1959, and became reader in 1962 and Professor and Chairman of Zoology in 1964. He left Melbourne to become Head of the Department of Anatomy and Developmental Biology at UCL in 1975, a position he held until retirement in 1996. From 1997 to 2015, Geoff was Director of the Autonomic Neuroscience Institute at the Royal Free Hospital in London, from which he returned to the Department of Pharmacology and Therapeutics, School of Biomedical Sciences, at the University of Melbourne. Geoff was very active in the Department, giving lectures and mentoring students. 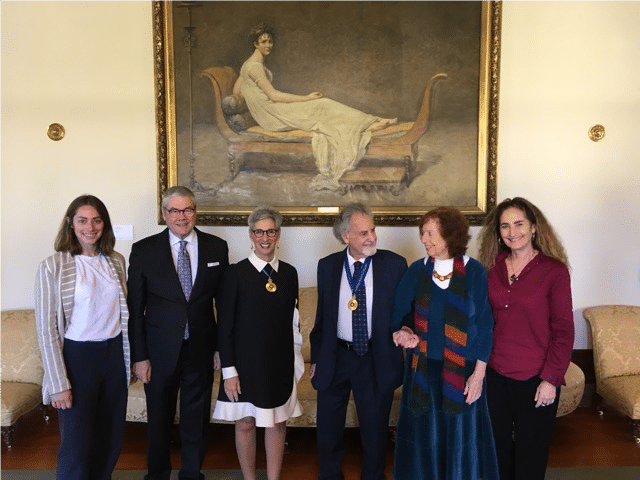 Reception by the Governor of Victoria to celebrate Professor Burnstock’s AC in the presence of his wife, Nomi, and family in 2018.

Geoff was to an extent an accidental pharmacologist, but threw himself into the field with great energy. He was involved in the discovery of non-adrenergic, non-cholinergic (NANC) neurons in the gut in the 1960’s and his research led to the identification of these as purinergic nerves, in spite of strong initial rejection by many well-established senior academics. From this he developed the purinergic theory and delved deeply into purinergic pharmacology, to the extent that he became first in the Institute of Scientific Information list of most cited scientists in Pharmacology and Toxicology from 1994–2004. Much of our understanding of purinergic signalling and the classification of purinergic receptors derives from Geoff’s work. Geoff is still the most cited Pharmacologist in the world.

Geoff was made an honorary member of the Australian Society of Clinical and Experimental Pharmacologists and Toxicologists (ASCEPT) in 1997 and Honorary Fellow of the British Pharmacological Society in 2004. Geoff gave the first Von Euler lecture at the Karolinska Institute in 1985, and was the BPS Gaddum Awardee in 2010, amongst many other distinctions. Geoff was an active supporter of purinergic research in Industry and Biotech. The first P2X3 antagonist, currently in phase III for the treatment of cough, is named after him: GEFAPIXANT.

Geoff will be remembered as a great scientist and person and mentor, as well as an accomplished artist for his beautiful wood carvings.