Our congratulations to Professor Tilley and her team for the publication of their research paper 'Artemisinin kills malaria parasites by damaging proteins and inhibiting the proteasome' in Nature Communications on Tuesday 18 September.

Malaria claims the lives of about 440,000 people worldwide every year, the majority of whom are children under five years of age.

Artemisinin resistance has developed in South-East Asia, with fears it will soon reach Africa. Not knowing how artemisinin works has obstructed understanding the growing resistance and developing better treatments.

However, working with the Japanese pharmaceutical company Takeda and Swiss-based non-profit Medicines for Malaria Venture, Professor Tilley and her team at the University of Melbourne have found a way to boost the efficacy of artemisinin and its derivatives (collectively referred to as ARTs) with the help of chemotherapy medicines.

"The double whammy effect means that combining artemisinin with an anti-cancer drug that also targets the proteasome, complements the activity of artemisinin, and can restore activity against artemisinin-resistant parasites" said Professor Tilley. 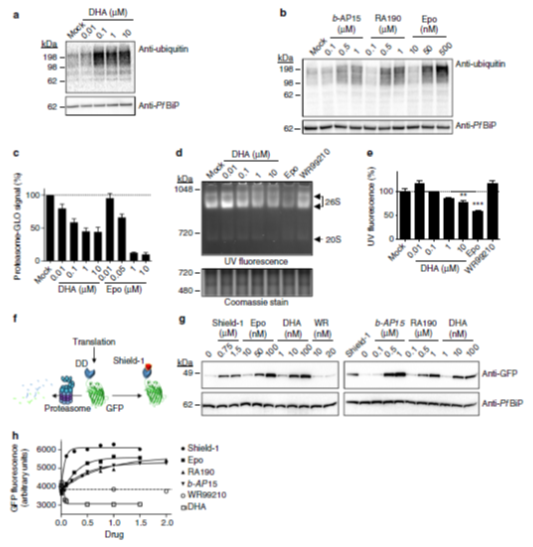 Dihydroartemisinin (DHA; the clinically relevant ART) causes a build-up of unbiquitinated protein by inhibiting the proteasome.

Blockage of the proteasome causes an accumulation of proteins that are marked with a "kiss of death" modification. When these damaged proteins build up, they stress the parasite and soon lead to cell death.

"We want a compound that can be administered orally and will last a long time in the bloodstream. If a suitable compound can be found, human trials could happen very soon."

Yet, developing a proteasome inhibitor antimalarial compound will not solve the problem permanently.

According to Professor Tilley: "It's inevitable that malaria will build resistance to the compound. You have to plan for the fact that resistance will develop."