New research may lead to reducing lymphatic spread of cancer

A basic science discovery has identified a specific molecule, the RNA helicase DDX21, to have a role in lymphatic vessel formation, known as lymphangiogenesis.

The fundamental research published in this month’s Nature Cell Biology, which came from zebrafish genetics, suggests a ribosome biogenesis regulator as a new factor important for the first steps of lymphatic but not blood vessel development. 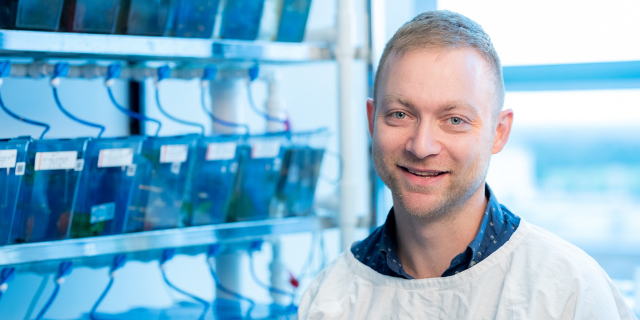 Prof Hogan, a NHMRC Senior Research Fellow in the Department of Anatomy and Physiology and Laboratory Head at the Peter MacCallum Cancer Centre, hopes the research will lead to better strategies to selectively target lymphangiogenesis in lymphatic diseases and cancer metastasis.

“Based on our findings, targeting DDX21 would reduce new lymphatic vessel formation and growth called lymphangiogenesis. Lymphangiogenesis increases the metastatic spread of cancer and is important in a number of diseases,” he explains.

The work, co-authored with Dr Katarzyna Koltowska of Uppsala University in Sweden and Dr Kazuhide Okuda a Postdoctoral Fellow at Peter Mac, suggests with new approaches that target DDX21, scientists may be able to address lymphatic spread of cancer and reduce lymphatic malformations in children.

The co-head of the Peter Mac Program in Organogenesis and Cancer added the process of ribosome biogenesis has not been explored in depth for its biological role, regulation or therapeutic potential in lymphatic biology, but is well studied and targeted in the clinic in cancer.

The research began in 2007 when Prof Hogan found a mutant zebrafish strain while completing his postdoctoral studies in developmental biology at the Hubrecht Institute for Stem Cells and Developmental Biology in The Netherlands. “We discovered that the mutant strain formed its blood vessels, but did not form its lymphatic vessels at all.”

The work developed further at Prof Hogan’s first laboratory at the Institute for Molecular Bioscience, University of Queensland, and took off when he moved to the University of Melbourne and PeterMac in 2019. The Hogan laboratory now investigates the lymphatic vasculature and the blood brain barrier, which play important roles in metastasis.

“Eventually, we found DDX21 was the gene responsible for loss of lymphatics and that DDX21 is activated in vasculature by the VEGFC-VEGFR3 pathway – a canonical lymphatic disease pathway – during development,” he says.

The next step is developing drugs that inhibit DDX21 and testing them in disease models.