Calls for a new approach to the grants process to help support women who experience career disruption.

Being a woman is never, and should never be, a barrier to success. That is the message of Professor Fabienne Mackay, head of the School of Biomedical Sciences, University of Melbourne, as she prepares to host an International Women’s Day event next week.

The panel discussion featuring six highly accomplished women in medical research, including Professor Kathryn North AC and Laureate Professor Ingrid Scheffer AO and Fellow of the Royal Society, will explore the challenges and advancements of women in biomedicine.

Professor Mackay says gender balance in the workplace should reflect society, but biomedicine is suffering from current and past neglect in supporting women better. 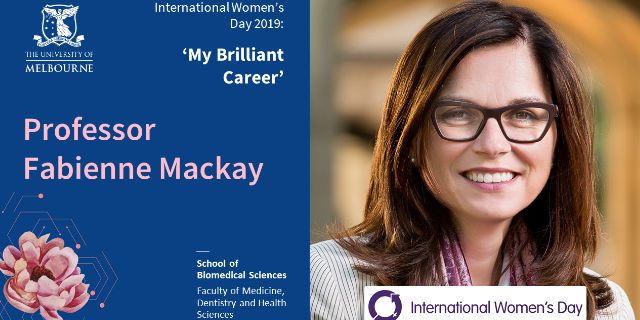 “We have an issue right at the beginning because we have a lot of females studying and wanting to enter the workforce, especially in biomedicine, and then when we consider the professorial level we see 25-30 per cent females compared to the large majority of men.”

Professor Mackay, who was appointed the inaugural head of school in 2015 says: “We are suffering from past neglect because there has never been any real attention to the fact that women have career disruption because of having babies and care responsibilities, which for the most part still falls on women.”

With a son of her own, now 21, Professor Mackay understands the challenges women face in continuing career momentum in medical research, particularly when it comes to funding.

After completing a PhD from Louis Pasteur University in Strasbourg, France, her research has made significant international contributions to the field of autoimmunity and oncology. Most notably, Professor Mackay’s award-winning work to find the causes of Lupus – a long-term autoimmune disease – resulted in the first new Lupus treatment in more than 50 years.

“In Australia, we have this notion of relative to proximity, but it’s very subjective,” she says.

“We might say, we know this woman has a two-year career interruption, but that doesn’t translate to any extra chance of her getting a grant. Because the reality in a very competitive grant system is, people who work full time and do a fabulous job are going to rank before those ladies anyway.”

To address gender balance in biomedicine ethically, in the case of funding, Professor Mackay is advocating for the introduction of a ranking system, as seen in parts of Europe. Scientists are ranked and separated into gender groups before grants are dispersed evenly between men and women.

“With a points system, if you’re a mother you would receive extra points, which increases your chance of getting funding,” she explains.

As the push for change continues, Professor Mackay reminds younger generations there are women in academia being valued by their organisation and being very good at what they do. “Remember, talent is a universally supported quality that has no gender.” Hear more from Associate Professor Mackay and the panel of leading women in biomedicine in the International Women’s Day: My Brilliant Career podcast. Available from Friday afternoon, 8 March.