Inside the career of a pioneer for female physician scientists worldwide.

Laureate Professor Ingrid Scheffer AO lives and breathes her work in epilepsy genetics. The paediatric neurologist and epileptologist at the University of Melbourne and Austin Health is a world leader in her field.

Starting out 25 years ago, it was believed severe epilepsy was acquired not genetic, however Professor Scheffer’s life’s work, in collaboration with Professor Samuel Berkovic and others, led to the identification of the first epilepsy gene and many more subsequently.

“In my field, people will sometimes say: ‘Knowing the gene will make no difference to my very sick child’. But, it’s the beginning of the answer. Once you know the gene you begin to understand causation. And, once you look at causation you can head towards precision medicine.” 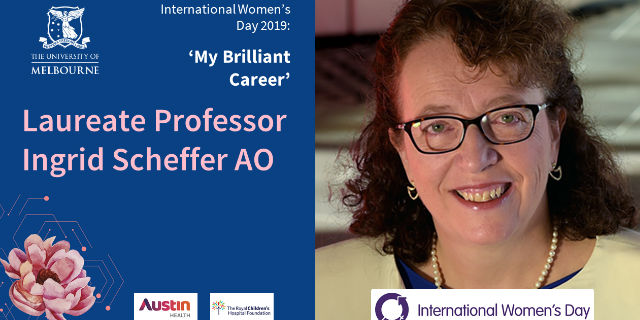 While Professor Scheffer often lives “four careers in a day, rather than a lifetime” – she’s a clinician, scientist, educator and administrator – it’s her transformative research and work with international collaborators that drives her.

“I see a lot of patients, but that means my work only touches the lives of the families I see. My clinical research means I can change the lives of people all over the world with far greater reach.”

In fact, her recent work led to the first major reclassification of the epilepsies in three decades (published in March 2017 for the International League Against Epilepsy). As a result of her career breakthroughs helping to transform the diagnosis and treatment of epilepsy, Professor Scheffer has received many awards including co-recipient of the Prime Minister’s Prize for Science and the Order of Australia, both in 2014.

“I have not had an easy time – I have met male obstacles all the way along…Implicit bias is not behind us – and some men, and women, don’t even know they are doing it.”

Professor Scheffer seeks friendship and support from like-minded women in biomedicine. “Some of my closest friends are women doing similar things in other countries,” she says.

It’s these relationships that provide her with balance. “I call myself an anti-role model because I work most of the time.” However, there is always time for dinner with friends.

At home, family life is underpinned by meticulous organisation, a secure infrastructure and a “very good husband”, says Professor Scheffer.

Her sons, now 26 and 21, are a doctor at Royal Melbourne Hospital and a Computer Science student at the University of Melbourne. “I’ve worked very hard, but I’ve also been involved in organising things on the home front. It just shows, you can do it your way – you don’t have to listen to what other people say.” Hear more from Professor Scheffer and the panel of leading women in biomedicine in the International Women’s Day: My Brilliant Career podcast. Available from Friday afternoon, 8 March.