New research led by Dr Sebastian Duchene, Dept of Microbiology and Immunology, looks at evolutionary rate of the SARS-CoV-2 virus.

The latest research from the School of Biomedical Sciences and Doherty Institute has found the SARS-CoV-2 virus has the ability to momentarily accelerate its evolutionary pace, enabling variants to emerge more rapidly than other viruses.

Recently published in Molecular Biology and Evolution, Dr Sebastian Duchene’s research team found the virus that causes the disease COVID-19 is actually undergoing short-lived mutational bursts and then returning to its ‘normal’ rate. 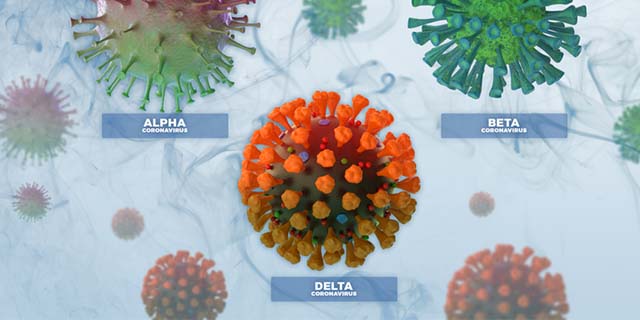 Dr Duchene, ARC DECRA Research Fellow and researcher in the Department of Microbiology and Immunology at the Doherty Institute, explained that usually all viruses mutate at a fairly constant rate, with most taking a year or more to develop a new variant.

“However, what we were seeing with the variants of SARS-CoV-2, particularly the variants of concern, is that they have undergone many more mutations than we would expect under the normal evolutionary pace of similar coronaviruses,” Dr Duchene said.

“The Delta variant, for example, emerged within just six weeks from its ancestral form.”

To understand why this was occurring, Dr Duchene’s laboratory conducted computational analyses of hundreds of genome sequences from SARS-CoV-2 strains to understand the mechanisms under which variants of concern emerge, with a focus on the first four: Alpha, Beta, Gamma and Delta.

“Initially it was believed that SARS-CoV-2 must have increased its evolutionary rate in general, but actually it’s the virus’s ability to temporarily increase its speed which is causing the difference in pace,” Dr Duchene said.

“It’s like someone pumping the accelerator on a car.”

Dr Duchene said these bursts could be driven by a number of factors including prolonged infections in individuals, strong natural selection, which is enabling the virus to favour immune escape, or increased transmissibility with unvaccinated populations allowing the virus to rapidly spread and evolve.

Article originally published by the Peter Doherty Institute for Infection and Immunity.

This research was also featured by a number of media and news outlets, including: