Year 10 and 11 students from around Victoria have been given a taste of what the biomedical sciences and a Bachelor of Biomedicine have to offer.

On Friday 30 August, more than 60 secondary school students and teachers from around Victoria were invited to the School of Biomedical Sciences and the Gene Technology Access Centre (GTAC) for Biomedical Sciences Day. Held annually, the day gives students from under-represented schools, including those from rural and regional areas, insights into the possibilities of studying biomedical science.

Professor Matthew Watt, Head of the Department of Physiology, welcomed the students and introduced them to the discipline of biomedicine and the Melbourne Biomedical Precinct.

Professor Watt also shared the story of his own pathway into biomedical science, and how an early fascination with physical education led him to physiological research and the science that underpins elite sport. Later, a fellow traveller on an international flight motivated him to study diabetes.

“Your scientific journey can start from anywhere,” Professor Watt said. 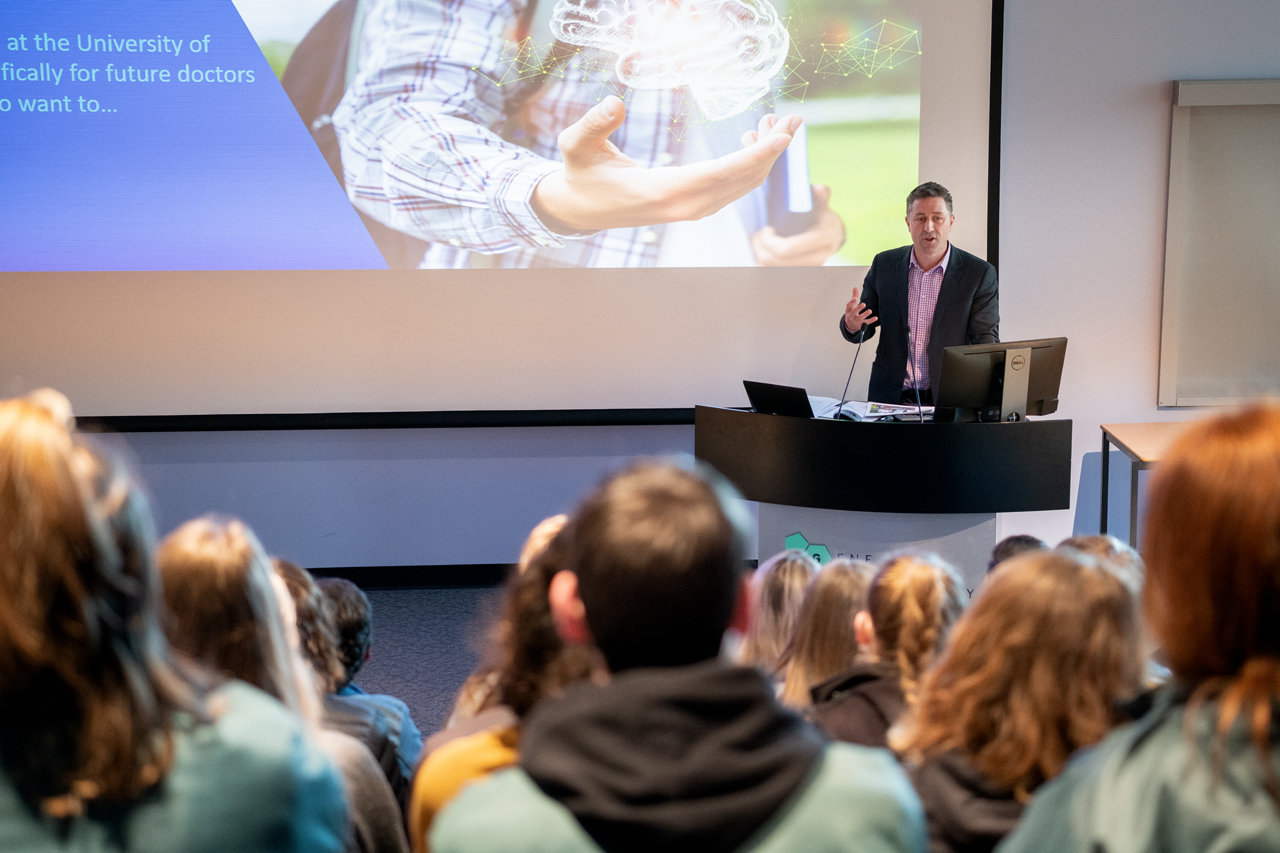 Professor Matthew Watt tells students what inspired his career in the biomedical sciences.

Over the course of the day, students were able to experience some of the highlights of the School of Biomedical Sciences, including  and the Digital Learning Hub, and the Harry Brookes Allen Museum of Anatomy and Pathology. The museum, which is not usually open to the public, is one of Australia’s largest collections of real human tissue specimens and historical anatomical models.

In the GTAC laboratories, they also experienced viewing various specimens with light, fluorescence and scanning electron microscopes under the guidance of biomedical researchers. Here, the students saved images of their discoveries, which they will turn into artworks to submit for judging and prizes.

Many of the students are from rural and regional schools, and showed great commitment in travelling to Melbourne for the day. Casterton Secondary College year 11 students Jasmin and Holly had a particularly early start, leaving home at 4am to drive to Melbourne from the Western Victorian town. 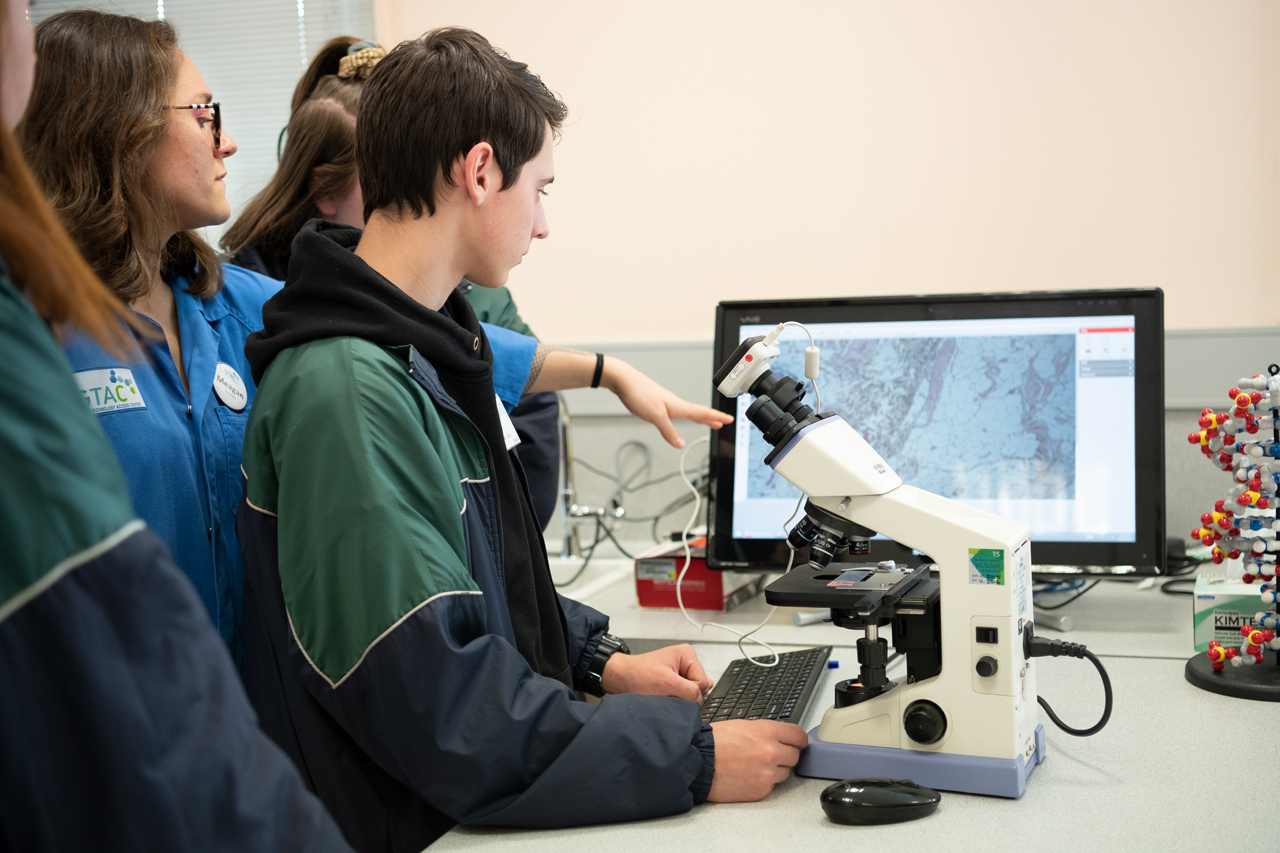 For Taleisha, a year 10 student from Kyneton Secondary College, the VRLS experience was the best part of the day. Here, the students interacted with the human heart in virtual reality, a program usually used to teach first year Bachelor of Biomedicine students.

“I’ve never seen anything like it before,” Taleisha said.

Horsham College student Fraser was intrigued by the trip to the Harry Brookes Allen Museum. The year 11 student, who has an interest in sports science, said that seeing the dissected body parts up close was especially useful for his VCE studies in physical education.

“I’m so interested in how the body works,” he said. “This is just so fascinating.” 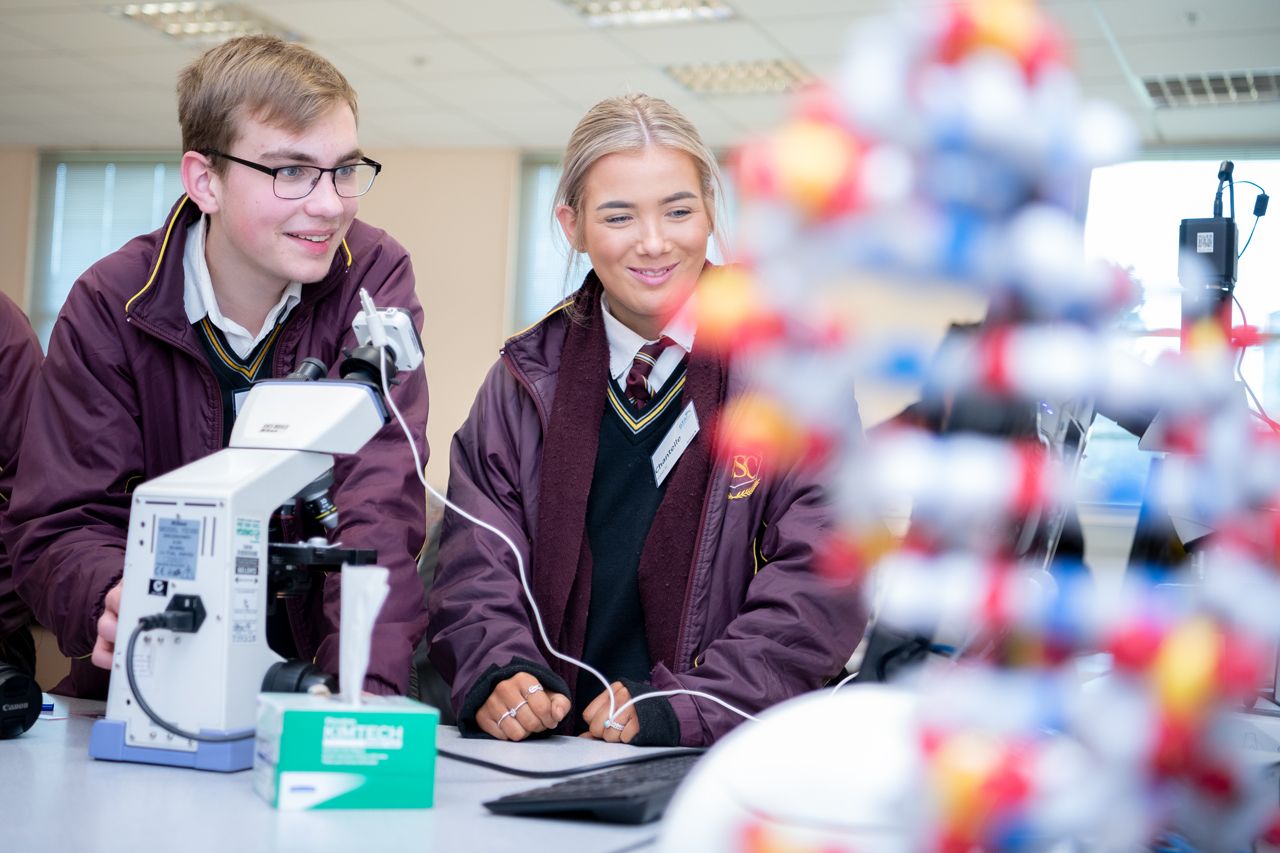 Wallan Secondary College students Will and Chantelle investigate what's under the microscope.

A Student Recruitment representative also spoke to the students about Access Melbourne, an equity scheme that assists students from under-represented areas with entry to undergraduate study at the University of Melbourne. The students were also given information about the numerous scholarships and support services available to them when applying to study at Melbourne.

Anna Watts, a teacher at Lyndale Secondary College, said that the information about Access Melbourne would be useful for many of her students.

“It’s really good to know the options if you’re coming from far away, or a different background,” she said. 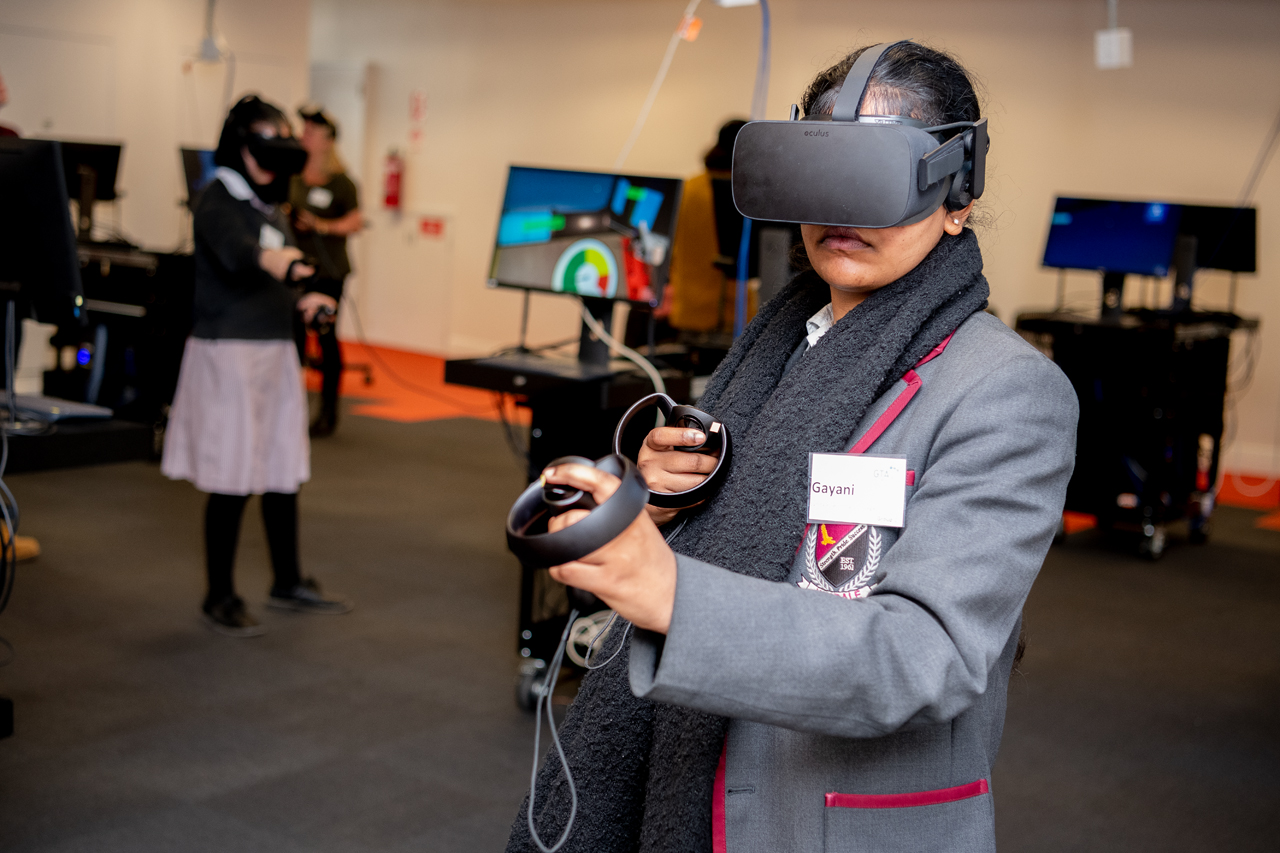 Anna also felt that the student panel was the highlight of the day for her students and gave helpful insights into university life.

The panel of students from the School of Biomedical Sciences – Georgie Carney, Philip Lee and Jasraaj Singh – discussed what inspired them to study a Bachelor of Biomedicine, the best parts of their university experiences and their top tips for success.

Jasraaj moved to Melbourne from a macadamia nut farm in rural Queensland to live in a residential college. Now a Doctor of Medicine student, Jasraaj found that the support networks of this “home away from home” helped her to adjust to her life in Melbourne.

Philip, a Bachelor of Biomedicine Honours student, chose to study at the University of Melbourne because of the smaller cohort of the degree.

“You can get to know everyone, compared with other unis,” he said. Student panellists Georgia, Jasraaj and Philip discuss their experiences at the School of Biomedical Sciences.

For Georgia, currently a third year Biomedicine student, the highlight of her experience was studying abroad for a semester in Montreal, Canada. In doing so, she was able to improve her French as part of her Bachelor of Biomedicine.

Georgia also recommended ways of making the most of your time at university: “Get involved in uni life through O-week camps, and join clubs to make new connections and build friendships.”

While for some students the day confirmed existing desires to pursue studies in biomedicine after completing school, it also gave less certain students an idea of the possibilities studying biomedical science could lead to.

Year 11 students Jordan and Nhi from St Albans Secondary College are unsure about what they want to do after they finish school. Jordan, who has an interest in science, said he initially saw the program as an opportunity to discover and explore. By the end of the day it had exceeded all of his expectations. 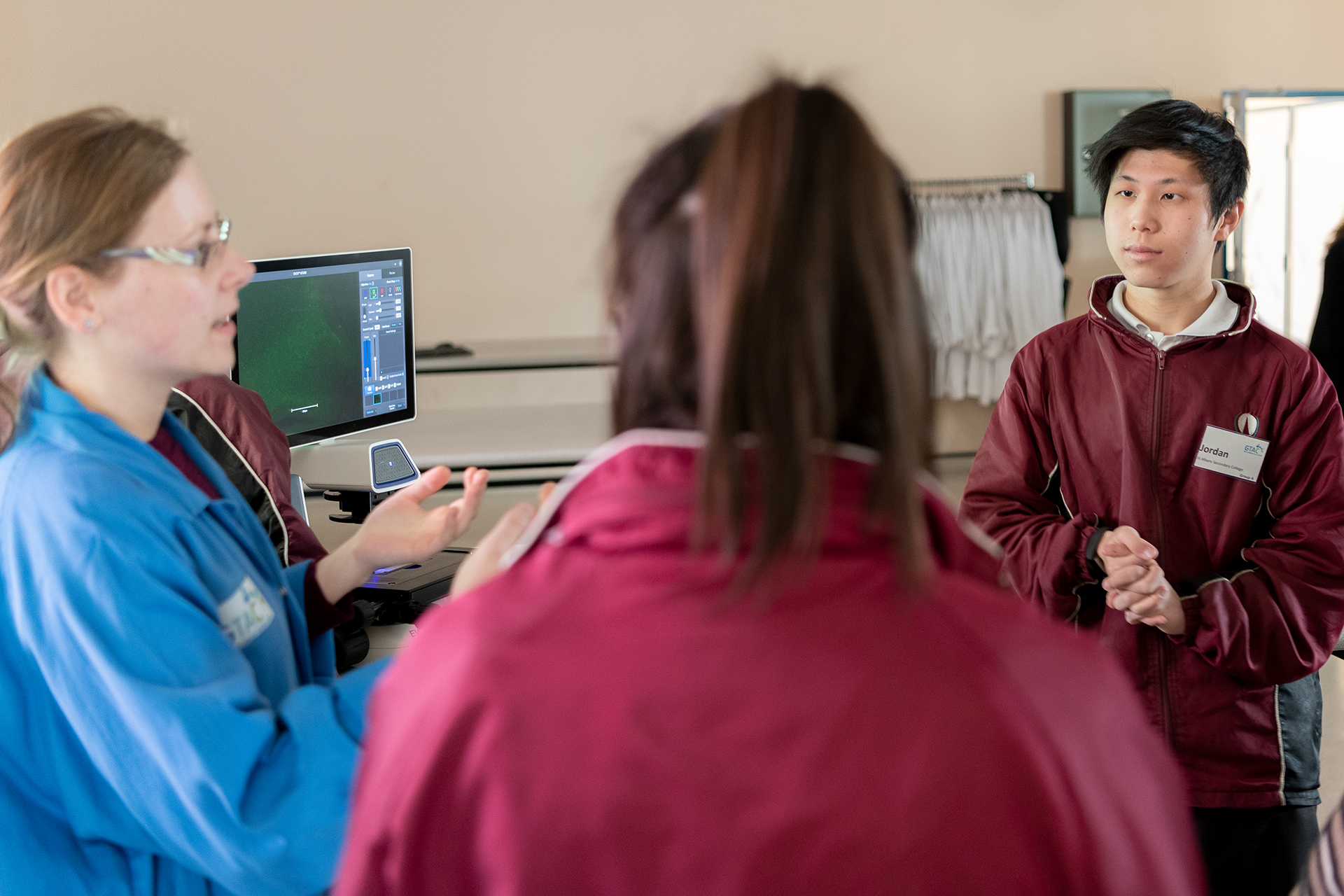 The day was also an opportunity for the students to visit the Parkville campus and get a taste of what university life is really like.

“I really like the campus – it’s like a little town,” said Ebony, a year 11 Benalla P-12 College student. “I would really love to study here someday.”

Professor Watt encouraged students to apply to the Bachelor of Biomedicine after completing their VCE studies.

“When you come to Melbourne, you don’t just come to the School of Biomedical Sciences,” Professor Watt said. “You also have access to the whole of the Melbourne Biomedical Precinct through your studies at the University.”

Find out more about the Bachelor of Biomedicine here.