Women’s UBL ends on a high for Biomedicine students

We chat to Biomedicine undergraduates, Rachael Smith and Eliza Bannan, about the latest UBL season, their passion for basketball, health and wellbeing.

The final season of the 2022 University Basketball League (UBL) has ended on a high with the women’s team winning the last two games. While this wasn’t enough to get the team through to the final, it resulted in a total of three wins over 10 games in the season, including the women's team first ever UBL win in April. Overall it was a great morale boost and opportunity for the team to bond.

"Our greatest challenge was trying to mesh as a team throughout the season, nobody knew each other at the beginning but by the end of the season we had jelled," says Rachael, who plays Centre in the Women's UBL team.

Rachael and Eliza both studying the Bachelor of Biomedicine in the School of Biomedical Sciences have played basketball since primary school. Teamwork, the competitiveness and the positive effect the sport has on their mental and physical health and wellbeing are the key motivators.

Rachael says: "Basketball is a sport of teamwork and engagement. Success depends on everyone committing and engaging to their role. I just love the competitiveness and fast paced nature of the game". Now in second year of the Biomedicine degree, Rachael is planning to pursue medicine and has an interest in women's health. She says her study load is hectic, but there are great support networks available within the course.

"All of the coordinators are so flexible and understanding with my university sporting commitments, and basketball is so important for me to manage stress levels. Without exercise as an outlet my mind is all over the place and I don't sleep well," she says.

Eliza Bannan is in her first year of Biomedicine and planning to work in health sciences. For her, sport isn’t just an outlet, it’s integral for maintaining her physical and mental wellbeing. 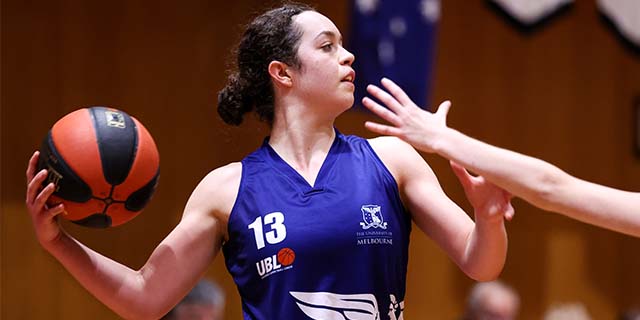 "There’s no better feeling than the pride of walking out of a training session or game when you’ve given it your all. Playing sport - especially team sport - is such a great way of making friends and building a support system. Amidst adversity, I’ve always been able to rely on sport and exercise to brighten my mood and make me feel more relaxed," she says.

The University Basketball League (UBL) season ran from 21 March to 11 May, with the Finals to follow.