Australia is home to some of the world’s most venomous land and sea creatures, including a myriad of snakes, spiders and jellyfish. Despite relatively few fatalities, there were more than 3000 hospitalisations due to injuries caused by venomous creatures between 2017-2018.

Dr Andrew Watt, co-head of the Australian Venom Research Unit (AVRU) based at the School of Biomedical Sciences, uses epidemiological data to drive clinical improvements for snakebite patients in Australia, and around the world.

“Treating bites and stings as a medical emergency can save lives,” he says.

“We’ve got a beautiful country that’s famously home to some incredible, yet venomous creatures. While bites and stings are reasonably rare, the correct first aid is essential for maximising our chances of a positive outcome when they occur.”

Dr Timothy Jackson, toxinologist and co-head of the AVRU agrees. “Changing climate, sprawling suburbs and rewilding of gardens and nature strips could increase the chance of people coming into contact with venomous creatures in the lead up to summer,” he says. “The Venomous Bites and Stings Day is a reminder for all Australians to learn and remember relevant first aid before adventuring outdoors.”

The Australian Bites and Stings app, prepared by CSL Seqirus, advises that treating the victim is more important than identifying the creature. The first actions after a bite or sting should always be calling 000 for emergency medical assistance and applying the correct first aid.

Having a first aid kit for venomous creatures nearby and undertaking a first aid course will help make sure you are prepared. Utilising pressure immobilisation bandaging (PIB), which slows the movement of venom in the body, is a critical first aid response before receiving emergency care. PIB is recommended after bites from Australian snakes and funnel-web spiders, or stings from a blue ringed octopus or cone snail.

Dr Jackson says it’s not all about the size of the venomous creature, either, as even small creatures can be dangerous.

“Research shows the venom of brown snakes changes as they get older, but the venom of most baby snakes is the same as their parents’, and capable of making you equally sick,” says the Department of Biochemistry and Pharmacology Research Fellow.

The Venomous Bites and Stings Day is an initiative of the Australian Government Department of Health, CSL Seqirus, AVRU and the Australian Reptile Park. 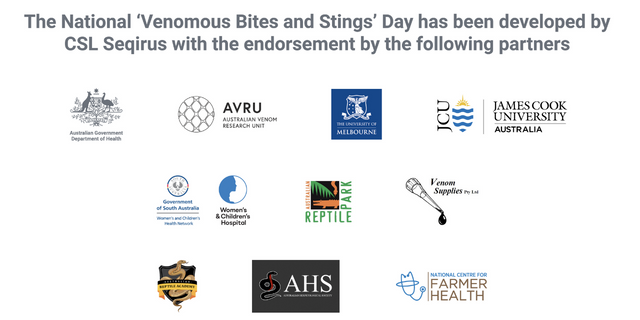 The  AVRU is a leading source in venomous research and knowledge in the Asia-Pacific region. It investigates medically significant venoms and antivenoms, surveils venomous injuries across Australia and leads the supply of antivenoms to Papua New Guinea (PNG) through the PNG Snakebite Partnership.