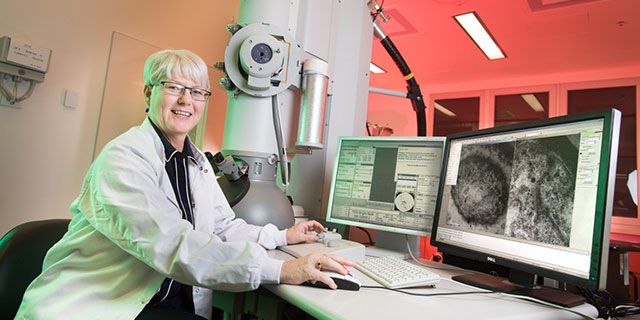 A team from the University of Melbourne has reached the finals of the "Oscars of science" — the Australian Museum’s annual science award, the Eureka Prize — for its work on drug resistance in malaria parasites.

The team, led by Professor Leann Tilley, is in the running for the Infectious Diseases Research prize for its work on resistance to artemisinin, the most commonly used frontline malaria treatment.

“As multi-drug resistance spreads, we risk wiping out the gains the world has made in fighting the disease, with potentially catastrophic results for children living in South-East Asia — as well as Africa, where the disease is endemic.”

The multidisciplinary team draws together experts from the University’s Bio21 Molecular Science and Biotechnology Institute, School of Mathematics and Statistics and School of Population and Global Health to understand how malaria parasites become resistant:

Artemisinin damages proteins and the team found that resistant parasites are better at repairing the damage. They then homed in on proteasomes — enzymes that act as disposal units within cells. When this recycling function is blocked, the efficacy of artemisinins against malaria parasite is restored.
Some cancer drugs also target proteasomes to stop cancers spreading. “We’ve found that some cancer drugs already on the market have excellent antimalarial activity and are highly effective in combination with artemisinin,” Professor Tilley said.

“This has led us to a new line of drug discovery, and we’re looking at libraries of compounds developed as anticancer agents to try to find a drug that specifically targets the malaria parasite.”

The team also developed a mathematical model that predicts how sensitive and resistant parasites respond to the drug in patients.

“Our model predicts that extending the current 3-day treatment to 5 days would restore the efficacy of artemisinin against resistant parasites,” Professor Tilley said. “This could buy us time to develop new antimalarials.”

This article first appeared on The Melbourne Newsroom on 29 July 2016. Please click here to view the original.