In Australia, the prime suspects for the condition have been the white tailed spider (Lampona sp.), the black window or black house spider (Badumna sp.) and the Wolf spider.  These spiders are commonly found in houses across Australia. Anecdotal experience suggests that  the majority of people bitten by these spiders will suffer only minor local reactions. As the majority of spider bites are not reported, the proportion of bites that result in necrosis is unknown.

Wolf spiders (Lycosa sp.) have also been suspected in at least one case of suspected necrotising arachnidism. (See below.)

Necrotising arachnidism is at present poorly understood in Australia, although it may have some parallels with loxoscelism, a syndrome of tissue necrosis sometimes accompanied by systemic illness and occasional deaths in the Americas. This syndrome is caused by the brown recluse or fiddleback spider (Loxosceles reclusa) in the United States, and by other Loxosceles species in South America.   It is believed to occur after approximately 10% of bites by these spiders.

Loxosceles rufescens, a related species, has been found around Adelaide, in South Australia, and may be responsible for a small number of cases of skin necrosis. 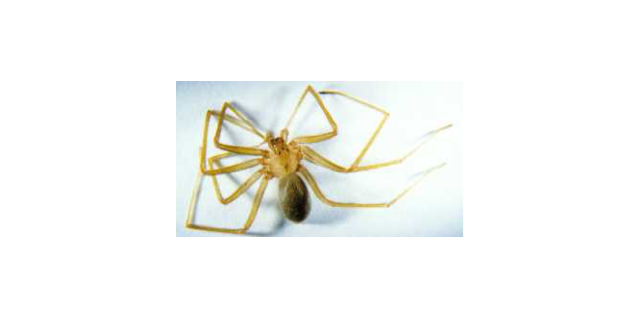 The reasons why some people appear to develop more extensive skin lesions are unknown. It may be that only some species of spiders are associated with skin necrosis. (There are several species of white tailed spiders, all of a similar appearance.) It is possible that the spider's sex or geographic location may be important, or that venom composition or contents of the spiders' gastrointestinal tract may vary over time. Patient factors such as underlying vascular disease or immune response to the bite may also be involved.

The number of documented cases in which necrosis has followed definite, witnessed spider bites is small.  A series of 15 cases of ulceration or necrosis following witnessed spider bite has recently been published by the Australian Venom Research Unit in theMedical Journal of Australia.  The spider involved was positively identified in 4 cases, and well described or recognised by the patient in the remaining cases.  Fourteen of the cases presented were associated with white tailed spiders, and one with a black house spider.

AVRU is also involved in a collaborative study, the Necrotising Arachnidism STudY (NASTY), that aims to identify patients with witnessed spider bites from positively identified spiders and to follow these patients looking for the development of skin problems. It is hoped that this study may be able to determine the proportion of spider bites that result in ulceration or necrosis, and possibly to identify risk factors for the development of necrosis. 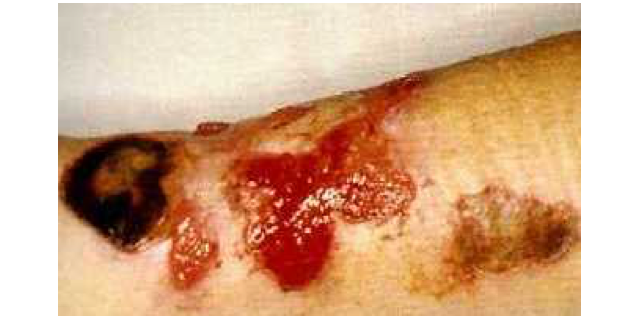 Ulceration and necrosis on the forearm of a patient following spider bite. The patient identified the spider as a Wolf spider.
(Photo D.M.Starr)

Research is hampered by the lack of reliability in reproducing necrotic effects in experimental models to date.  Another major difficulty in characterizing the syndrome of necrotising arachnidism in Australia is the lack in most clinically suspected cases of a definitive history of spider bite and/or a positive identification of the spider involved.  In addition, there is as yet no test or assay for spider bite or spider venom, so that retrospective diagnosis is impossible at this time.  Many patients present with an area of blistering or necrosis, usually on the limb,  but usually without a definite bite history or without identification of the offending creature if a bite has been felt.

The diagnosis of necrotising arachnidism, therefore, is one that must be considered circumstantial in many cases, and care must be taken to exclude other treatable causes of necrotic lesions .  A list of possible differential diagnoses is given below.

There is as yet no definitive treatment for necrotising arachnidism.  Those that have been tried include antibiotics, corticosteroids, hyperbaric oxygen therapy, surgical  debridement +/- skin grafting (early or late) and (for loxoscelism) cytotoxics such as colchicine and cyclophosphamide. Antibiotics that have been used include dapsone (particularly in the United States), erythromycin and doxycycline, as well as penicillin , flucloxacillin and cephalosporins.  None of the above treatments has been systematically trialled.  Alternative treatments such as L-cysteine and aloe vera have also been used.  There are anecdotal reports of success in healing ulcers, including ulcers thought to be related to spider bites, with hyperbaric oxygen therapy, but no organised trials have been conducted.