Tiger snakes are found in the temperate areas of southern Australia, including Tasmania, where they are particularly large and venomous. Identification of tiger snakes by the presence of stripes is unreliable, since this varies with the seasons and the maturity of the snake, and there is also an unstriped black species (N. ater). Several other venomous and non-venomous Australian snakes may also be striped. Features of tiger snake envenomation include neurotoxicity (caused by pre-synaptic and post-synaptic neurotoxins), coagulopathy and rhabdomyolysis. Tiger snakes are solidly built, with broad, flattened heads.  When disturbed, tiger snakes may flatten their necks in a threat display.  They usually strike low to the ground.  Average length is approximately 1m.  Adults are usually banded, and colour may vary from pale yellow to almost black.  Occasionally, the bands may be absent, leading to difficulties with identification.  The fangs are usually around 3.5 - 5mm in length. Tiger snakes are ovoviviparous (holding the eggs in their abdomen until they hatch, and giving birth to live young).  The average litter size is around 30. Tiger snakes are active on warm summer evenings, and are attracted to farms and outer suburban houses, where they hunt mice and rats, and where they may be trodden on by unwary people barefoot at night.  They prefer swampy or marshy ground, and hunt frogs around creeks, rivers or dams.

This snake is distributed along the southeastern coast of Australia, including Victoria, eastern New South Wales, part of South Australia and Tasmania. This includes many of the most populous areas of Australia, and tiger snake bite is currently one of the most common snake bites in Australia, along with brown snake.

The venom is produced in large quantities, the average yield being around 35mg.  The record yield was 180mg.  Tiger snake venom contains pre-synaptic and post-synaptic neurotoxins, myotoxins and procoagulants. Bites result in paralysis, incoagulable blood and muscle damage, which may lead to renal failure. 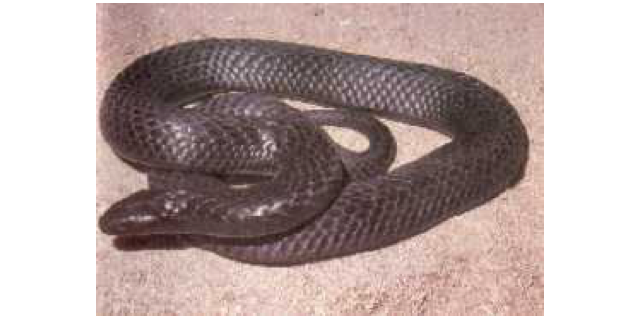