Taipans are large, fast, highly venomous snakes with large fangs and large amounts of venom.  Prior to the introduction of antivenom (in 1955) and modern medical care, more than 90% of taipan envenomations were fatal. Three distinct species are described in Australia; the coastal taipan and the western or inland taipan, or fierce snake and the Western desert Taipan.  A related species, Oxyuranus scutellatus is found in Papua New Guinea. 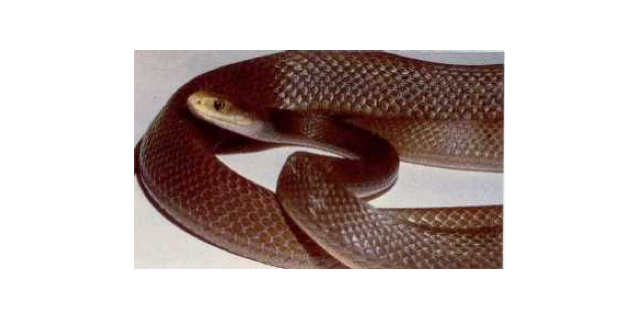 This aggressive and highly venomous snake is It has the largest fangs (13mm) and is the longest venomous Australian snake (up to 3m)  It usually hunts during the day, except in very hot weather, when it hunts in the evening. Its diet consists mainly of rats, mice, thereby attracting it to barns, farms and other habitations. It is not usually aggressive unless cornered or attacked, when it may strike rapidly, inflicting multiple bites.

The head is distinct from the body, which in the adult is usually light or dark brown, with a creamy yellow abdomen.  The pupil is round, and contained within an orange iris.  Taipans average 2.5m in length, with the record being 3.35m.  Clutches of 10-20 eggs are produced.

Found along the coast of northern Australia from Brisbane to , and as far south as the Kimberleys in western Australia.

The average venom yield is approximately 120mg, and a maximum yield of 400mg has been recorded.  The clinical syndrome includes severe neurotoxicity and coagulopathy.  Rhabdomyolysis is a lesser feature. 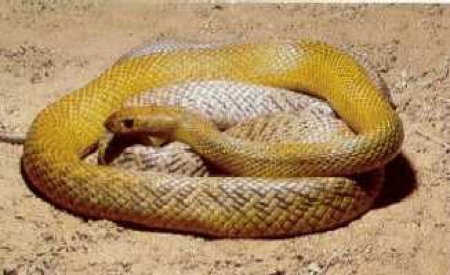 Also called the Western or inland taipan or the small-scaled snake, this snake produces the most toxic venom of any snake world-wide.

Little is known about this snake in the wild.  It feeds on rats, and may live in their burrows.   Despite the name, it is not known to be more aggressive than any other snake.
Similar in body shape to the coastal taipan, the head may be black, and faint banding may be visible, especially towards the tail. The average length is around 1.7m, and the maximum recorded size is 1.93m.  Clutches of 9-12 eggs are produced, and incubate for about 66 days.

Although its supposed range is limited to a small area of western Queensland, there have been historical reports of the snake well outside this area, including northern New South Wales and as far as northern South Australia, and the true current range is unknown.

The venom is similar to that of the coastal taipan, although more toxic by weight. Average venom yield is 44mg, with a record yield of 110mg. Similar clinical effects of paralysis and clotting disturbance are caused by envenomation. All recorded bites to date have been in snake handlers, and no deaths have been documented.

Described in 2007 the Western Desert Taipan this snake is considered dangerous. A pale brown colour with the head paler than the remainder of its upper surface.

This species was found east of the Walter James Range, Western Australia.