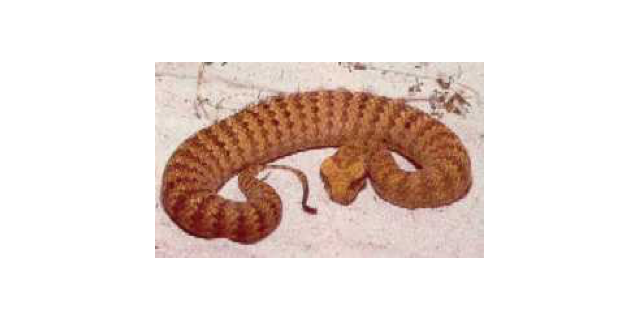 Three major species have been identified; A. praelongus, the northern death adder (north of the Tropic of Capricorn), A, pyrrhus, inhabiting desert regions of central and Western Australia, and A. antarcticus, covering the rest of Australia, except Victoria and Tasmania.  They are ambush predators, concealing themselves in leaves, sand or gravel and twitching the ends of their tails to attract prey. Prey consists of frogs, birds, lizards, mice and rats.  It is mainly active at night.  Unlike most snakes, the death adder will not necessarily retreat from humans and may therefore be more easily trodden upon or disturbed by the unwary. They are said to be less likely to strike unless actually touched than other  venomous snakes, but great caution is still advised. Death adders are readily identified by their short squat appearance.  The head is broad and triangular, like that of a viper, the body short and thick and the tail thinner and distinct from the body.  Coloration is variable from region to region, and most death adders are banded to some degree.  The pupil is elliptical.  Average length is approximately 0.65m, and the maximum recorded length is 1.1m.  The fangs are of death adder are quite long (6-8mm) and are more mobile than those of other Australian venomous snakes, again resembling those of the vipers.

It is found throughout Australia, except in Victoria, Tasmania and the most southern parts of Western Australia.

Death adders are found throughout  most of Australia,

Average venom output is around 85mg, and the maximum recorded venom output 235mg.  Its venom contains a post-synaptic neurotoxin, with negligible coagulant or myolytic activity.  Effective bites result in paralysis, and prior to the introduction of antivenom, around 50% of death adder envenomations were fatal.