Snakes of the genus Pseudonaja, including the common or Eastern brown snake (P. textilis), the dugite (P. affinis) and the gwardar (P. nuchalis), are found throughout mainland Australia, and are responsible for the majority of snakebite deaths in this country.  Coagulation disturbance is common in brown snake bites, as is neurotoxicity. Myolysis is not a feature of brown snake envenomation, although renal failure may ensue putatively as a result of direct nephrotoxicity or disseminated intravascular coagulation. 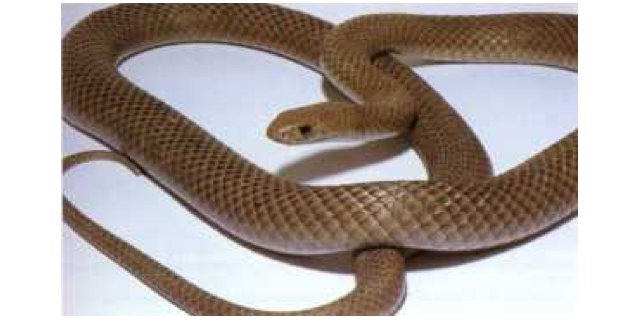 The common brown snake is active mostly by day, except in very hot weather, and feeds on rats, mice, birds, lizards and other snakes. It is attracted to barns and farms, and prefers dry country to swampy areas. The brown snake lays from 10 to 35 eggs. The young brown snakes are banded in dark grey or black, and have a broad band on the back of their heads. By three years of age, the bands disappear, and the adult is usually uniform in colour, ranging through light or dark brown, orange-yellow or even black. The shape is streamlined, and the head is not distinct. The average length is approximately 1.5 metres, and the largest recorded length 2.4 metres. When attacking, the brown snake winds its body into an 'S' shape (see photo), raising itself off the ground. It strikes very rapidly, with its mouth open, possibly because of its relatively small fangs (approximately 3mm in length). 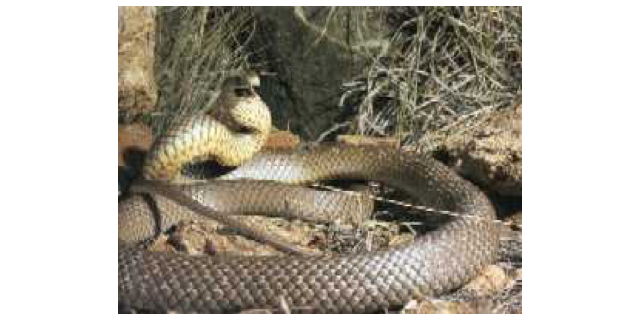 The common or eastern brown snake is found throughout the eastern half of Australia, with the exception of Tasmania. It has also been reported in New Guinea, where it is believed to have been introduced by man.

The average venom yield is around 4mg (although the record venom yield was 67mg). The venom contains potent neurotoxins and procoagulants, resulting in progressive paralysis and incoagulable blood. Clotting defects may require multiple doses of antivenom for complete reversal. Occasional fatalities have occurred as a result of bleeding into the brain due to coagulation disturbances.

Mostly active during the day, the gwardar has similar feeding habits to the common brown snake, but is said to be less aggressive than its eastern counterpart.
The adult is usually olive to brown, and may have a dark head or a number of broad bands.  An average clutch of 20 eggs is laid.

Average venom yield is approximately 3mg.  Like the common brown snake, the venom contains neurotoxins and procoagulants, although the toxicity, as measured by LD50 in mice, is less than that of P. textilis.

The gwardar or western brown snake is distributed over most of Australia, with the exception of eastern New South Wales, Victoria and Tasmania.  Its range overlaps that of the eastern brown snake. The adult is usually olive green to brown, often with dark spots or flecks. The abdomen may also be dark, unlike that of other brown snakes. They are considered more aggressive than the western brown snake (gwardar).

The dugite is limited to a small area of the southern coast of Western Australia and South Australia. This includes many populous areas, and dugites are a relatively frequent cause of snakebite in this area.

The average venom yield is around 6mg, the record being 17mg. Like other brown snakes, the venom is neurotoxic and procoagulant. It is less toxic by weight than that of the common brown snake or the gwardar.