Many Australians pride themselves on the belief that, of all the countries in the world, their snakes, spiders, jellyfish, centipedes, fish, ticks, bees and ants are the worst. And it’s easy to believe they’re right.

After all, there’s a 37-year-old list that says that 21 of the 25 most toxic snakes in the world are all from Australia. And aren’t funnel-web spiders, box jellyfish, stonefish and cone snails all dead-set killers?

But is Australia really the most lethal nation on earth when it comes down to it? Actually, no, it’s not. And the reason is simple.

A matter of perspective

It’s useless to measure how dangerous something is based solely on laboratory lethality tests. Venom toxicity and the number of mice killed with a snake’s average venom yield, for instance, are interesting only from an academic perspective.

If you happen to be one of around 100,000 people who die of snake bites around the world in any given year, such facts are irrelevant. The same goes for just about any other venomous creature we might like to proudly declare as the planet’s most lethal. 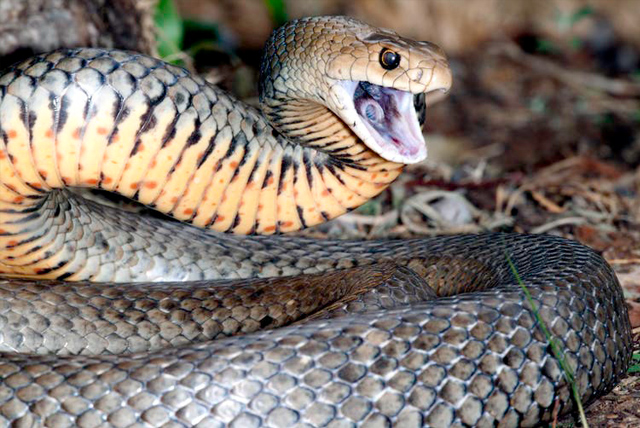 The Eastern Brown Snake (Pseudonaja textilis) and its relatives cause most of the bites and fatalities in Australia. Photo Dr David Williams

While Australia has spiders, jellyfish and other animals with lethal venom, the reality is that bites and deaths are rare. In other words, despite very toxic venoms, these creatures don’t bite enough people to cause major problems. Even when they do bite, it’s rare for snakes to inject venom (or “envenom”), less than 450 of 3,000 snakebite cases a year, for example. Death is even rarer (two to three cases a year).

Animals that cause the greatest burden of human suffering and death are the ones we need to be most worried about, and from that perspective, the most dangerous are not Australian.

Consider snakes, one of the most feared groups of venomous animals in the world. If we want to know which snakes are the most dangerous, we should consider the global, rather than individual impact. That view shows three groups of vipers that collectively span almost all of the tropical developing world – and have a huge impact on human health – best deserve the title of the world’s most dangerous.

Perhaps the most dangerous of these three genera is a diverse group of small, seemingly innocuous vipers that range from Sri Lanka and India, across the Middle East and through a huge part of the northern half of Africa. 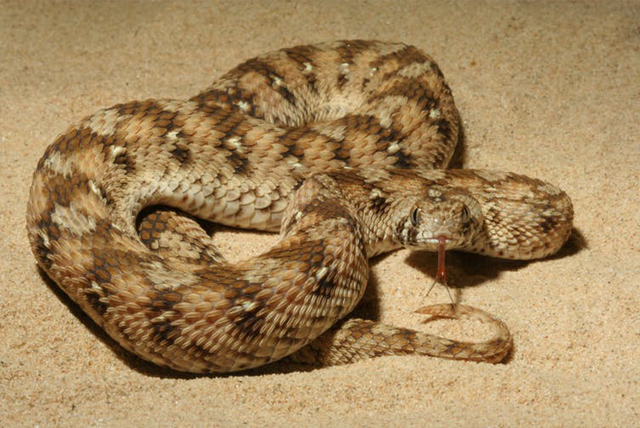 West African carpet viper (Echis ocellatus) from Togo – member of a genus of small vipers that are the world’s most dangerous snakes. Photo Dr David Williams

These snakes got their name from the patterns that adorn their bodies. They are small- to medium-sized vipers believed to injure and kill more people each year than any other species in the world. Yet they don’t make the list of most toxic snakes mentioned above at all.

In just one hospital in Nigeria’s north-eastern Gombe State, 5,367 victims of carpet viper envenoming were treated over a two-year period. But for the use of an effective antivenom, the fatality rate may have been as high as 35% to 45%. That’s more cases at one hospital in two years than all the recorded cases throughout Australia in ten.

Their huge range across a vast swathe of the rural tropics brings carpet vipers into contact with hundreds of thousands of people each year. And while nobody has a tally of just how many lives they affect, international experts all agree that when it comes to the most dangerous snake, these vipers have no competition. Russell’s viper (Daboia russelii) arguably the most dangerous snake in Asia with a potent cocktail of destructive toxins in its venom. Photo Dr David Williams

This pugnacious viper lurks in fields, rice paddies and farmland from Pakistan through India, Nepal, Sri Lanka, Bangladesh, Myanmar, Thailand and Cambodia, as well as Taiwan and southern China. There’s a distinct, disjoined population of an equally dangerous sister species (Daboia siamensis) in eastern Java and the lesser Sundas in Indonesia.

Like the victims of carpet vipers, those bitten by these snakes bleed uncontrollably and often fatally. At the same time, local tissue destruction and necrosis, acute kidney injury, neurotoxic paralysis, shock, and cardiac arrhythmia can produce a terrifying clinical picture that can very quickly lead to death.

Latin America, from Mexico to Argentina, is home to more than 40 species in the genus Bothrops, lancehead pit vipers. Collectively, this very diverse group is responsible for many of the estimated 150,000 or more cases of venomous snakebites in Central and South America each year. Systemic effects involving stopping the ability of blood to clot, platelet destruction, shock, acute kidney injury and thrombosis present doctors with a complex medical emergency that – even with the best care available in a modern hospital – can still ultimately prove fatal.

Since many cases occur in rural areas, away from good medical care, poor outcomes are common.

Within Australia, the low mortality from snakebite (and other types of venomous injury) is very much the product of decades of research and excellent clinical care, not to mention safe and effective antivenoms.

It’s the lack of these same attributes elsewhere in the world that renders snakebites such a potentially life-changing (if not, life-ending) public health issue.

This article first appeared in the Conversation as part of their Deadly Australia series.