Last week, Dr Timothy Jackson told us that venoms are essentially a type of poison. We call the components of both venoms and poisons “toxins”. Biological toxins can be grouped in a few different ways, depending on how we want to look at them. This week, AVRU researcher Bianca op den Brouw delves a little bit deeper into the molecular side of toxins, explaining how they work, and some of the ways in which they can be classified.

Venom or poison – what’s the difference?

Venoms and poisons consist of bioactive molecules that can induce a toxic effect once in the body of another organism. These molecules, therefore, all fit under the term “toxin”. Last week, we heard from Dr Timothy Jackson that venoms are essentially a type of poison, the difference being the mode of delivery. So, are there any differences between the molecules themselves?

Molecular size and structure often differ categorically between a venom toxin and a poison toxin. Biological poisons are typically very small, organic molecules. Their tiny size means that they have a stable structure that is resistant to environmental fluctuation. This also means they are more readily able to cross protective barriers in the body, and their toxic effects can thus be experienced following ingestion, absorption, or inhalation of the poisonous substance.

A typical venom toxin, on the other hand, is comparatively large, proteinaceous, and possesses an activity that relies on the molecule’s structural integrity (a specific shape and 3D structure). This precise conformation is essential for the active sites on the molecule to function. However, this also makes them fairly unstable. Any significant changes to protein structure—by heat, for example—results in a loss of toxin activity. This is called denaturation and explains why the first aid treatment for a stingray sting is to immerse the affected area in hot water. It is akin to what happens to the white of an egg when you boil it. Being large and proteinaceous, such toxins cannot be readily absorbed in their native state and may also be broken down by the digestive system, hence the theoretical ability to drink snake venom with little ill-effect – unless of course you have any lesions in your mouth or oesophagus (do NOT try this at home!). 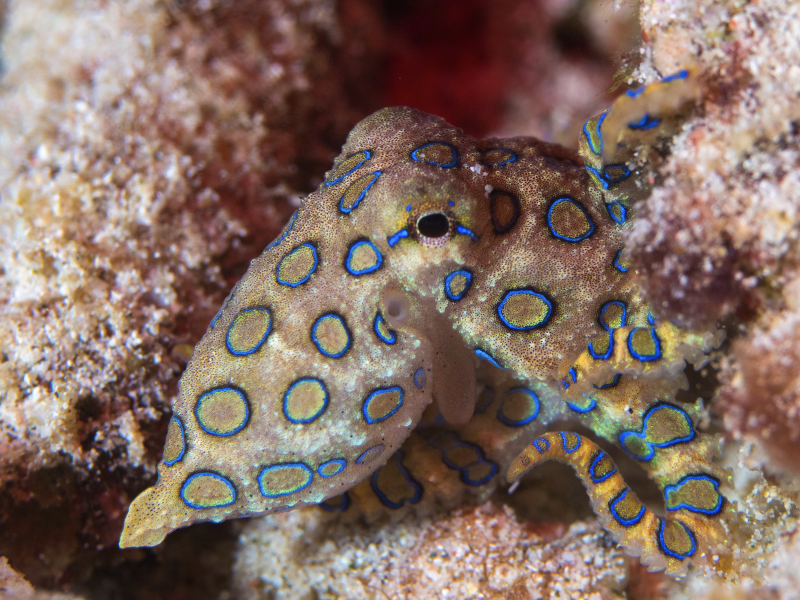 However, as with most things in nature, there are exceptions to the rule. One such example can be found in the venom of the blue-ringed octopus (Hapalochlaena spp.). While this tiny cephalopod primarily uses its powerful venom for predation, it is infamous in its ability to drop a human within as few as 15 minutes after being bitten. This is thanks to the paralysing effects of a potent neurotoxin called tetrodotoxin. However, tetrodotoxin is a small, non-proteinaceous molecule that is also lethal if ingested, meaning that it is both a venom and a poison depending on mode of delivery. In fact, this same toxin can be found in the tissue of the pufferfish, and it is responsible for the numerous accidental deaths that result from the consumption of an ill-prepared plate of the infamous Japanese dish fugu. 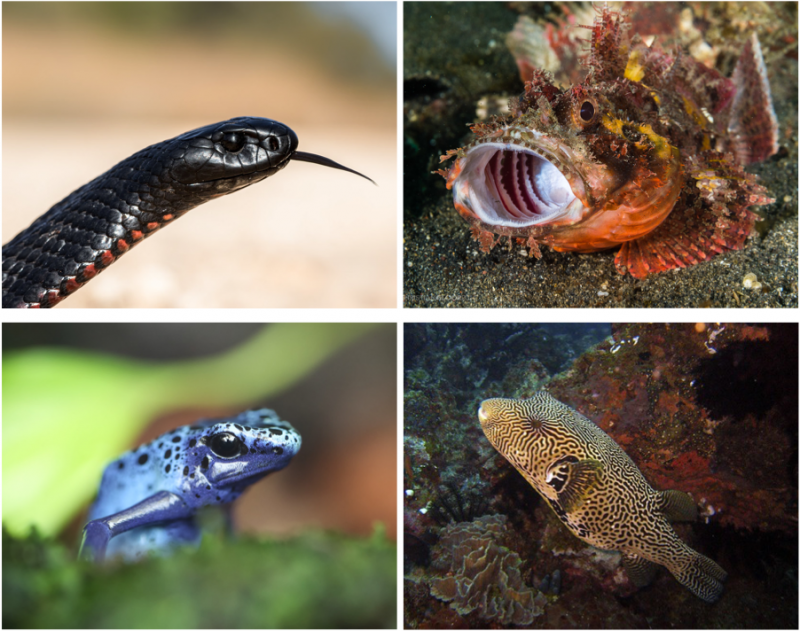 There are a number of other such examples of small, “poisonous” toxins within venoms. Therefore, while it is possible to generalise the differences in biochemical characteristics of “most” venom toxins versus “most” poison toxins, these properties are not defining characters. Rather, it is the way in which the toxins enter the victim’s body that is key to their differentiation.

However, to keep things simple, for the rest of this blog we will be focussing on the traits of toxins that are most characteristic of venoms (large, proteinaceous molecules).

So, how do these venom toxins work once delivered?

As a toxin is of a very specific molecular configuration, it follows intuitively that they typically have distinct molecular targets in the victim’s body. That is, a given toxin type will commonly target a specific protein or cell receptor, for example, much like a lock fitting a key.

Toxins bind with specific molecules in the body, depending on the structure of the toxin. Image: Wikimedia commons/CC 2.0

Venom toxins usually target molecules that are involved in regulatory processes. These processes, for example the regulation of blood (haemostasis) or of nerve signalling, are collectively referred to as “homeostasis”: the maintenance of stable and optimal conditions. Toxins work by upsetting this homeostatic balance. For example, this could be by inhibiting a process (such as blocking nerve signalling to induce paralysis), or it could be via stimulation (such as activating proteins to induce extensive blood clotting or to cause severe pain). This is a very quick and effective way of catching prey or deterring a predator. 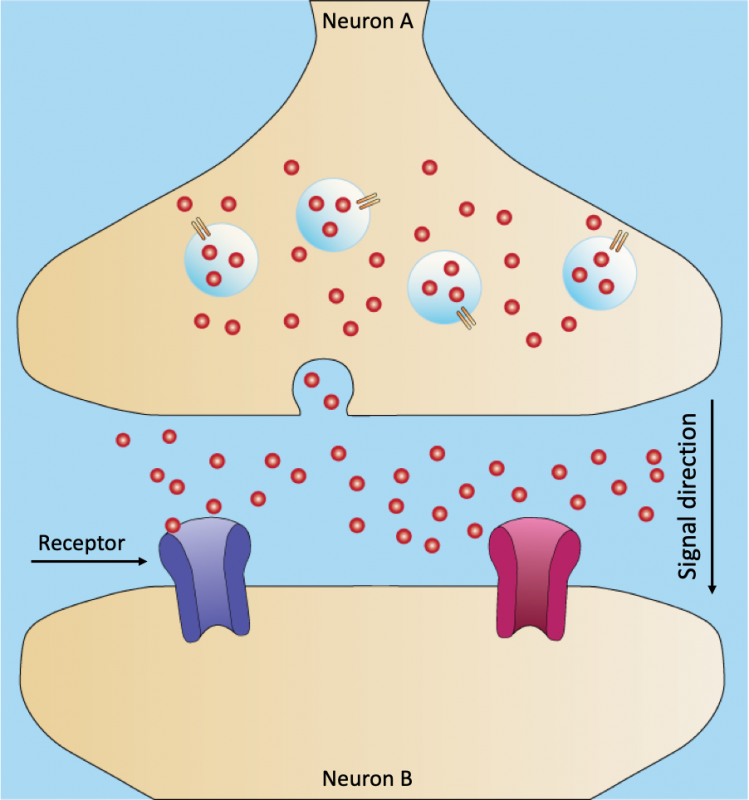 Nerve cells (neurons) communicate by passing signals from one cell to the next. Once the signal reaches the muscle cells, it tells the muscle to contract. Some neurotoxins work by blocking certain receptors within neurons. This stops the signal from being transmitted to the muscles, causing paralysis. Image: Rcchang16/Wikimedia commons/CC 2.0

This allows us to broadly categorise toxins based on the pathology that they induce. For example, toxins that target the nervous system are known as neurotoxins. They can cause paralysis by either extreme stimulation (leading to sustained muscular contraction) or by inhibition. Haemotoxins interfere with blood-related molecules to cause a wide range of pathological outcomes such as stroke or haemorrhage. Cytotoxins destroy cells to cause widespread tissue death and necrosis. There are also several other such categories, including myotoxins (muscle) or nephrotoxins (kidneys), but we will revisit all of these in greater depth in a future blog. 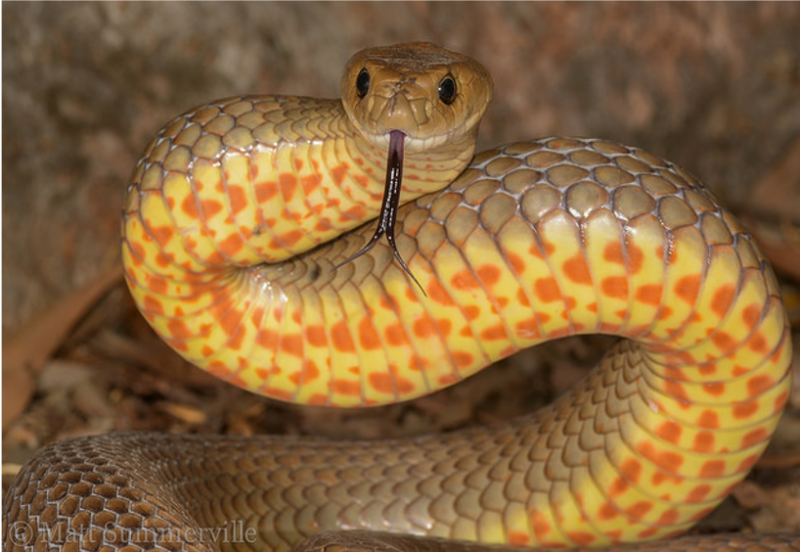 The eastern brown snake, Pseudonaja textilis, induces rapid blood clotting with its powerful haemotoxic venom. However, humans are not the intended victim of brown snake venom. They will only bite when feeling threatened, so if you come across one of these guys then your safest option is to give it plenty of space so that you can both move on safely. Photograph by Matthew Summerville.

However, as there are so many cells and molecules involved in each of our homeostatic processes, any of which may be targeted by a toxin, these categories actually tell us very little about the toxin itself. From a biochemical perspective, toxins are instead classed by their structural scaffold – their core structure – into one of a dozen or so toxin families. Their active sites, however, may vary from toxin to toxin, and this is mostly what determines their molecular target and activity. Think of it as classing cars based on their type of engine, where varying external features such as tyres, shell, and overall size will determine its performance. Stick a 5.7L V8 engine in a VW Beetle, and it will drive pretty differently than the same engine in a Toyota Landcruiser fitted with Mickey Thompson tyres – and I dare say that the two cars would be driven on different roads to different destinations. Along the same lines, one type of snake venom metalloprotease (SVMP), for example, may activate a specific blood protein to induce clotting, while another SVMP may destroy blood vessel walls to cause haemorrhage. Furthermore, a toxin’s activity will peak under its own set of optimal conditions, such as a specific temperature and pH – favourable track conditions, if you will.

Because of this diversity in toxin type and activity, as well as the plethora of regulatory molecules maintaining homeostatic processes, superficially similar pathologies could be induced by totally different toxins acting on different molecular targets. For example, neurotoxicity could be induced by a three-finger toxin (3FTx) blocking a given nerve cell receptor, or by a phospholipase (PLA2) breaking down the structural lipids (fats) of skeletal muscle cells – two very different toxins with different precise targets, but the same apparent pathological outcome: paralysis. Different roads being driven by different cars but arriving at the same destination.

Given the intricacies of biological systems, it is no wonder that there is so much more to venom than at first glance. Hopefully this post has given you a greater understanding of the molecular side of toxins. In future posts, we will dig a little deeper into how specific toxins work to catch, kill, and deter other organisms, and how the physiology of different prey animals influences this (and in some cases – fights back!).

Thanks for reading and don't forget to check back for more lockdown reading material!