In a time when days have lost all meaning and we’re spending more time than ever making bread from scratch, a good distraction is priceless. Or in this case free. So join us again as we introduce you to the second group of our maligned housemates. Those venomous creepy-crawlies that tend to get a bad rap and some others that thoroughly deserve it. So, get comfy in your ever expanding pillow fort and get to know, the ants.

Best known as nature’s way of telling us that we need to keep our kitchens cleaner, ants are some of the hardiest insects around. Measuring from just under 1 mm to a little over 5 cm, these tiny marauders have been honing their crumb-hunting skills since the dawn of time. More specifically, they’ve been here since at least the Late Cretaceous period about 100–66 million years ago, which we know thanks to the fact that ants preserve pretty well in amber (which you can read more about here). 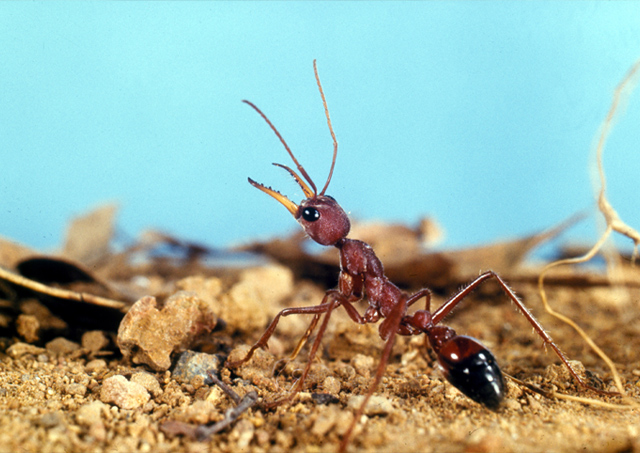 Having been around for a few million decades, it’s perhaps not surprising to learn that there are an estimated quadrillion or so ants running around the place (that’s 1,000,000,000,000,000 or 1015). But who are we to blame them for their burgeoning population? After all, we humans had a baby boom following a single war, and they had to do something to pass the time.

There are an estimated 13,000 known ant species around the world. With the exception of Antarctica and a few remote islands, they can be found on almost every landmass on earth. In Australia, approximately 1,300 different ant species have been described, but the real number may be almost double that.

Putting the social in eusocial

Ants belong to the family Formicidae in the order Hymenoptera, a Tolkien-esque classification that puts them in the same order as wasps and bees. Like many of their cousins, ants are a eusocial insect. This literally means ‘true social’, but more broadly refers to the high level of social organisation that can be observed in ant colonies. 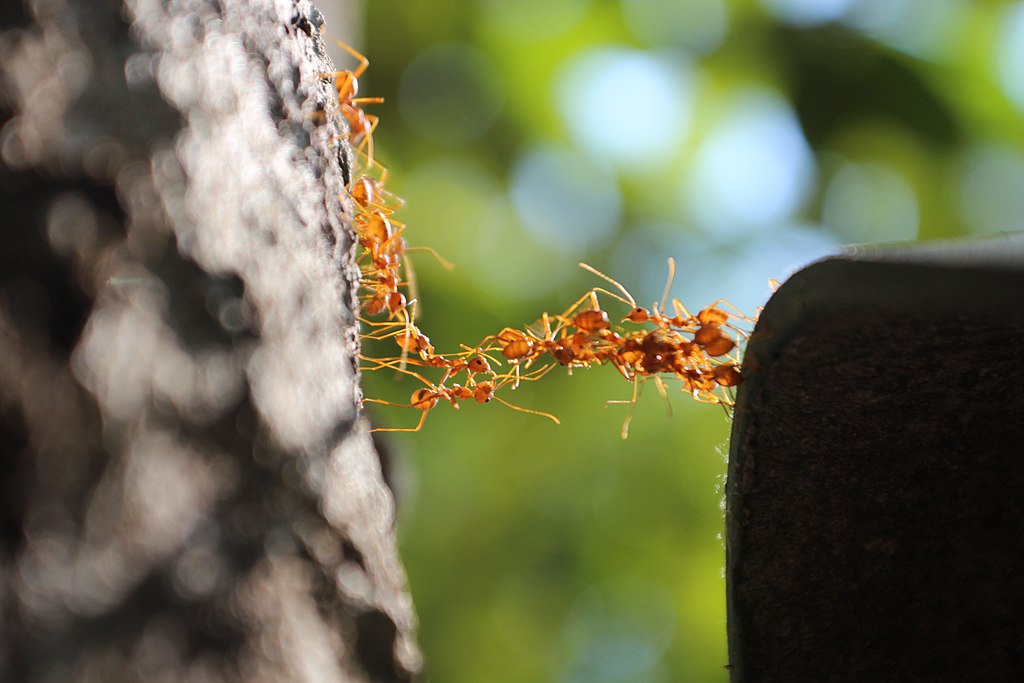 Like human societies, ant colonies have complex social structures that come in a range of sizes. From a few individuals to many thousands living and working together. In most colonies, there’s a queen ant at the top whose main job is to lay the thousands of eggs needed to keep the colony going. There are male ants who are mainly there to mate with the queen and then die. And then there are the female worker ants. These ants are responsible for literally everything else. They forage for food, care for the queen’s young, guard the colony, take out the trash and do all the other odd jobs required to keep the whole thing running smoothly. These are also the ants that you’re most likely to see roaming your home and garden on their never ending quest for the fabled pantry.

As they forage for food, ants release pheromones to create scent trails that act as a guide to other ants further down the line. Just as the smell of cookies baking draws us to the kitchen, these pheromone trails lead ants to their nearest food source, perhaps a cookie crumb. As each ant takes a chunk of biscuit back to the colony, they add their own pheromones into the mix to keep the trail fresh. Ants use pheromones to create a trail between their nest and nearby food. Image: Pixabay.

Unlike humans, ants don’t have noses. They do, however, have two specialised antennae that they use to detect chemicals, such as pheromones, in their surroundings. These antennae are attached to the ant’s head and are distinctly elbowed. As well as detecting nearby chemical signals, these elbowed antennae also alert the ant to vibrations and air currents in their vicinity and can be used to communicate with other ants through touch. Technically, the human nose can also be used to do all of these things, but please be warned that doing so may lead to some fairly uncomfortable conversations.

In addition to pointing out food sources, ants also use pheromones to signal danger. Injured ants release pheromones which attract other ants to the area and get them riled up for a fight. These alarm pheromones act like a chemical version of a medieval war horn, telling the city guards it’s time to grab their swords and get to the city gates. Except instead of swords, ants come readily equipped for battle with their powerful mandibles and a venomous sting. Diagram of an ant from the antennae on its head to the venomous sting on its gaster. Image: Public Domain.

The venom's kept out back

Wait, ants have a venomous sting? Yes. Well, at least some of them do.

Like most other hymenoptera, ants have a sting attached to a venom sac towards the back of their bodies. In ants, this area is called a gaster. Before stinging, an ant will grab onto its victim using its powerful mandibles before curling up their body and thrusting their long, barbless and retractable sting, into their victim’s body. It’s aggression, but on a tiny scale. In Australia, the main culprits of painful stings belong to the genus Myrmecia, such as bull ants and jumper ants. These ants are aggressive and territorial and will mount an attack if we inadvertently stand on or too close to their nest or path. Both of these ants have distinct traits. For example, bull ants are large, measuring between 1-4 cm in length, while Jumper Ants are generally 1-1.5 cm long, and often display a distinctive jerky, jumping way of moving. For most of us, stings from these ants will result in an immediate painful reaction, which can last upwards of five minutes. Localised swelling often occurs around the sting site. This can last for up to a week and is often accompanied by some pain and itchiness.

While this certainly doesn’t sound pleasant, for some of us an ant sting can represent an even greater danger. An estimated 2-4% of stings by Australian ants result in an allergic reaction to the ant's venom. For these individuals, an ant sting can very rapidly result in a severe allergic response including anaphylaxis. It’s important to note that an allergy may occur after an initial sting, or after subsequent stings, so seek medical advice through 000 or your local hospital if you’re concerned at any stage. It’s important to note that, while the sheer number of ants may be alarming, these tiny critters perform an important role in our ecosystems. They help our plants by aerating the soil and help to keep other pests at bay. Ants also help to disperse plant seeds to neighbouring areas in a process called myrmecochory. Myrmecochory is particularly important following bush fires. Ants are some of the earliest residents to return to fire affected regions. The seeds they disperse, as well as those they’d stored underground for food, ensure that new plant life is able to regrow. So while they may be a nuisance at times, as long as they’re not directly disturbing you, it’s often best to leave them undisturbed in turn. After all, there’s more of them than there are of us.