The Australian Venom Research Unit in collaboration with the Charles Campbell Toxinology Centre (University of PNG) operate a Snakebite Clinic in the Emergency Department at the Port Moresby General Hospital. This clinic is the only facility of its kind in Papua New Guinea, and provides 24 hour-a-day access to specialist treatment of bites and stings by a wide range of venomous animals.

The clinic treats between 11 and 43 patients each month, with a focus on ensuring that all patients are managed according to a standardised protocol. This ensures that as soon as a diagnosis of snakebite envenoming is confirmed, antivenom is administered without delay, and airway and breathing problems are expertly and promptly treated to reduce morbidity and increase patient safety.

Clinicians interested in gaining experience in the treatment of snakebite in our clinic are encouraged to get in touch with our team to discuss the available opportunities. 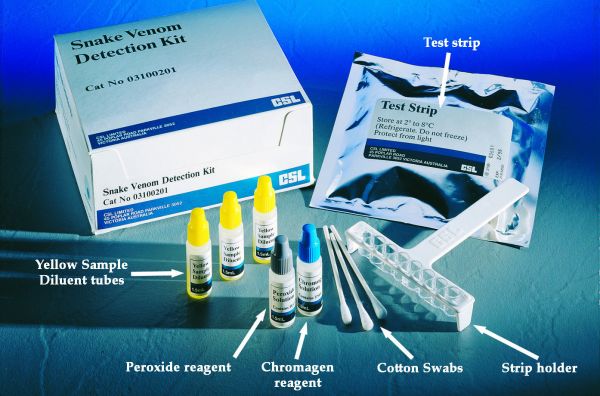 Australia is the only country in the world that has snake venom detection kits.They consist of a rapid two step enzyme immunoassay in which wells are coated with antibodies to the various snake venoms. A swab from the bite site, blood, or urine helps to select the type of snake antivenom which may have to be used. Note that the primary purpose of the venom detection kit is not to decide whether envenomation has occurred (i.e. whether antivenom is indicated), but to help to choose the appropriate antivenom if required.

Australian antivenoms are amongst the safest in the world. Many patients, even those with a past history of reaction to equine proteins, such as snake handlers, have had minimal or no problems with repeat antivenom therapy after premedication. They are, however, foreign protein, and the possibility of allergic reactions, including life threatening anaphylaxis, should always be considered and facilities be made available for dealing with such complications before the administration of antivenoms. Adrenaline is the treatment of choice for anaphylactic and anaphylactoid reactions, in conjunction with bronchdilators, fluid replacement etc.

Most antivenoms are given by the intravenous route, although redback spider antivenom and box jellyfish antivenom are more often used intramuscularly. Skin testing for allergy to antivenom is not recommended, as it is unreliable and may delay urgent therapy.

Antivenoms that are given intravenously should be diluted in at least 100ml of N. Saline, 5% dextrose or Hartmann’s solution immediately prior to administration. It should initially be administered slowly while the patient is observed for signs of allergic reaction. If no reaction is observed, then the rate of infusion may be increased. If the patient reacts to the antivenom, the rate may be slowed or the infusion ceased temporarily. If the reaction is more severe, then treatment with adrenaline, plasma volume expanders and beta agonists should be undertaken as required. The decision to recommence antivenom should be based on the clinical state of the patient. In the case of the patient with a known allergy to antivenom or to horse serum, the decision as to whether to withhold antivenom should again be clinically based, bearing in mind the resuscitation facilities available. The initial doses of antivenom recommended are based on the average amount of venom injected by each of the snakes concerned. There is evidence, however, that these doses may be insufficient to reverse coagulopathy associated with the bites of several Australian venomous snakes, notably the brown snake and the taipan. Larger initial doses should be considered if there is evidence of severe envenomation (multiple bites, rapidly progressive symptoms, large snakes).

The dose of antivenom for children should not be reduced according to their weight, since the amount of venom injected by the snake is independent of the victim’s size.

Note: the antivenom requirements of patients will vary considerably. Some patients with minimal envenoming will required no antivenom, whereas others may require multiple doses of antivenom.

Detailed information on the use of antivenoms is packaged with the individual antivenoms. If you require additional advice, contact the Information Centres on 13 11 26 (Australia wide) or CSL Ltd on (03) 9389 1911.