Design and development of antibiotics against multidrug resistant bacteria

Polymyxins are cyclic heptapeptides with a tripeptide side chain linked to a fatty acid tail (Figure 1). They are polycations at physiological pH owing to the five L-a,g-diaminobutyric acid (Dab) residues. They have a narrow spectrum of activity which is mainly against Gram-negative bacteria. Currently, they are mainly used as last-line antibiotics for multidrug resistant (MDR) Gram-negative infections. Although the incidence of resistance to polymyxins is currently relatively low, resistance can emerge rapidly in vitro in P. aeruginosa, A. baumannii and K. pneumoniae, and polymyxin resistance in hospitalised patients has been increasingly reported. 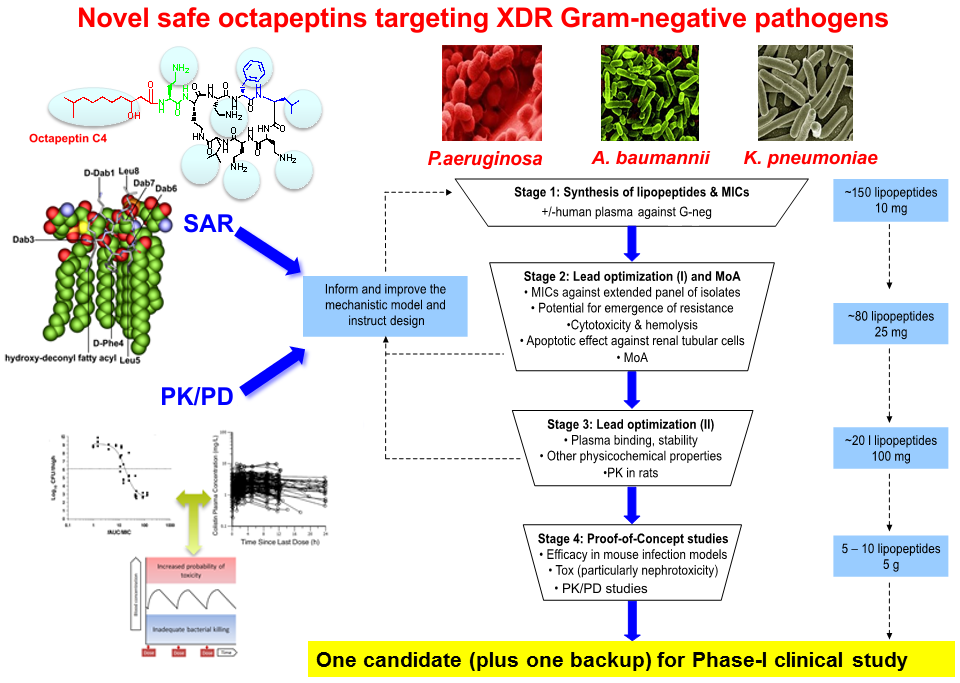 There is only one amino acid difference between colistin and polymyxin B and, not surprisingly, cross resistance exists. In essence, resistance to polymyxins implies a total lack of antibiotics for treatment of life-threatening infections caused by these MDR Gram-negative ‘superbugs’. Numerous hospitals worldwide have experienced outbreaks of infections caused by P. aeruginosa, A. baumannii or K. pneumoniae that are resistant to all commercially available antibiotics, including the last-line therapies colistin (polymyxin E) and polymyxin B. Infection with MDR Gram-negative pathogens is a major public health problem worldwide and as such there is an urgent need for new antibiotics active against MDR infections.

The principle aim(s) of this project include:

This research project is available to Honours students, Master of Biomedical Science to join as part of their thesis.
Please contact the Research Group Leader to discuss your options.