We have made the remarkable discovery that ghrelin receptors are involved in control of digestive function not through an action of ghrelin, but through the action of dopamine.

Ghrelin is a naturally occurring hormone that had been thought to be a transmitter in the central nervous system (CNS), and some years ago we discovered that ghrelin is a powerful CNS-acting stimulant of defecation in animal models and humans.  A striking conclusion from our discoveries is that the strong stimulation of defecation by ghrelin agonists is independent of ghrelin, which we discovered to be absent from the CNS.  Our data indicate that the physiological activation of the ghrelin receptor, GhrR, is through dopaminergic transmission acting at a combined GhrR / dopamine (DRD2) receptor, as summarised in the figure below. In this project we are investigating how ghrelin and dopamine receptor agonists act and interact at this receptor complex in biophysical systems, isolated cells, native cells and whole animals. We will investigate the relevance of our discoveries for treatment of constipation in two disease models. 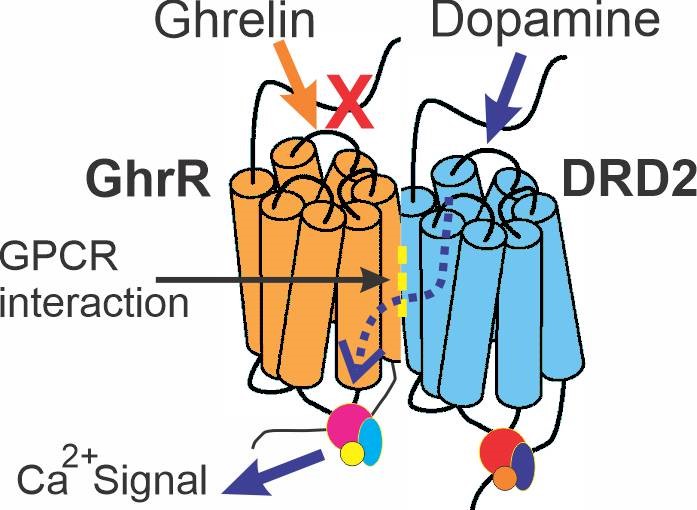 This research project is available to Masters by Research, Master of Biomedical Science to join as part of their thesis.
Please contact the Research Group Leader to discuss your options.