Posthumous awarding of PhD to the late School of Biomedical Sciences researcher .

Savant Thakur was an inspirational Department of Anatomy and Physiology PhD scholar, driven to find a cure for his own condition – Duchenne Muscular Dystrophy (DMD).

Sadly, Savant fell short of time in his quest to find a cure, but he made incredible inroads with award-winning studies into muscle wasting disorders at The University of Melbourne’s Centre for Muscle Research.

At just 27, Savant succumbed to DMD on Sunday 16 June 2019, after being diagnosed at age four.

Thanks to the support of his mentor and PhD supervisor, Professor Gordon Lynch, together with co-supervisors, Dr Kristy Swiderski and Dr James Ryall, Savant had published his research along the doctoral journey, with significant findings published in Philosophical Transactions of the Royal Society, Cell Stress and Chaperones and Biology Open. 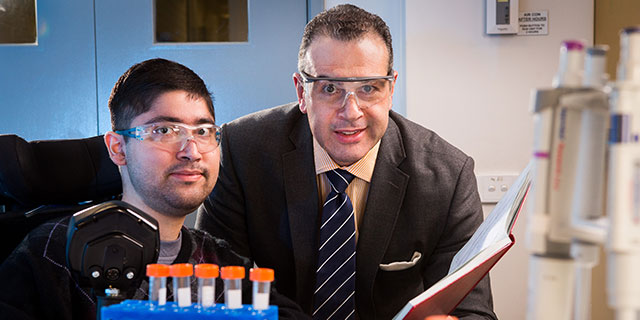 His PhD thesis was prepared by his supervisors and with support from staff, including Graduate Research Examinations Coordinator Mary Makris, was submitted for external examination on what would have been his 29th birthday. The thesis was passed on 16 April this year.

“Living with DMD gave Savant a unique perspective in studying muscle biology,” says Prof Lynch, Director of the Centre for Muscle Research. “He faced many challenges, but always strove to give his all to his research.

“Throughout his Honours and PhD research, Savant investigated fundamental questions regarding the processes of muscle injury and repair, with specific focus on a family of proteins called the heat shock proteins – HSPs."

A photograph of Savant with a memorial plaque hangs in the entrance to the Centre for Muscle Research. The Centre will gift Savant’s parents and supervisors a hard copy of the thesis.

The Department of Anatomy and Physiology also funded a copy of the thesis to be placed in the Baillieu Library’s Special Collections.

“Savant’s quest to understand and optimise muscle repair was truly inspirational,” says Prof Lynch. “He was on a mission to identify potential new therapies to help thousands of people around the world living with the consequences of skeletal muscle disorders.” In his first experimental study, published in Cell Stress and Chaperones in 2019, Savant measured the expression of different HSPs during muscle cell development.

His second experimental study, published in Biology Open in 2020, extended these findings and examined the role of increasing levels of a specific HSP, Hsp70, in promoting muscle cell development.

“In his final experimental study, Savant extended his findings into a mouse model of muscle injury,” explains Prof Lynch.

“Using a physiological model of limb ischaemia-reperfusion injury, he examined the expression of the different HSPs during muscle damage and repair, and tested whether increasing or decreasing levels of Hsp70 expression influenced the success of muscle regeneration.”

In 2020, the School announced the Savant Thakur Memorial Scholarship to support PhD candidates within the School who demonstrate the qualities Savant exemplified – academic excellence, resilience in the face of adversity and leadership in the community. The inaugural PhD scholarship, worth $115,000 over four years, will be announced soon.