School of Biomedical Sciences researchers named as 2021 Australians Who Mattered

For the Health and Science category, Professor Kanta Subbarao, Professor Stephen Kent, Dr Jennifer Juno and Professor Damian Purcell from the Department of Microbiology and Immunology have been named as 2021 Australians Who Mattered. 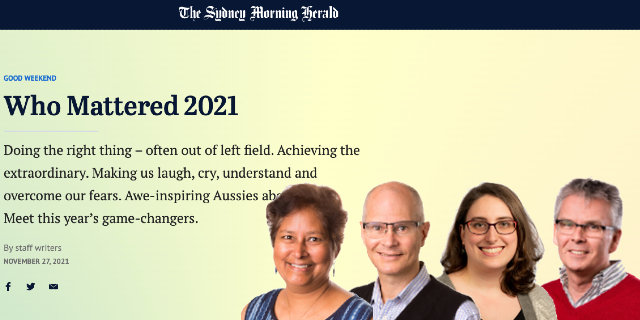 Professor Kanta Subbarao, Professor Stephen Kent, Dr Jennifer Juno and their colleagues were acknowledged as the team that warned of waning immunity following COVID-19 vaccination, a world-first in Science and informed policy surrounding vaccination globally. Named as Australians Who Mattered for their groundbreaking research, published in Nature Medicine, on how and why COVID-19 vaccinations wane, this team’s vital research became a force for change in terms of booster vaccines, and thus improved the health and safety of Australians across the nation.

Professor Damian Purcell and other influential biomedical experts were named as Australians Who Mattered for securing mRNA manufacturing in Australia. This informal coalition of scientists from the Australian RNA Production Consortium played an immense role in successfully lobbying the federal government to invest in a national manufacturing facility, and getting both New South Wales and Victoria pledging to build pilot mRNA manufacturing facilities, all in the space of just 18 months.

We congratulate these researchers on their outstanding contributions to improving the lives of Australians and for making our country better. To read the full list of 2021 Australians Who Mattered, click the link below: