Dr Hamish McWilliam, Group Leader in the Villadangos Laboratory at in the Department of Microbiology and Immunology and Peter Doherty Institute for Infection and Immunity, has been awarded the prestigious Fabienne Mackay Award.

Dr McWilliam’s research investigates how the immune system detects bacteria in order to generate immune defense against pathogens. He is also a father of two, who took paternity leave in 2022 which helped support his partner's return to work for her graphic design business. 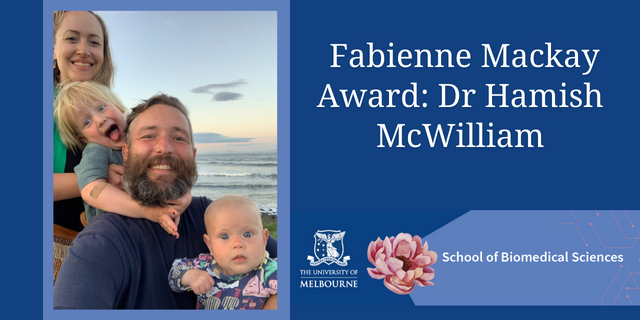 “I’ve come to realise that men or partners taking parental leave is an important step in allowing mothers return to work sooner, effectively levelling the playing field by not leaving the child care entirely up to women,” he says.

“I am extremely grateful to receive this generous award, which will boost my productivity and impact following my return to research. I hope it might also raise awareness, normalise and encourage other men at the School and the University to take parental leave.”

The Fabienne Mackay Award was launched in 2021 in honour of the inaugural Head of the School of Biomedical Sciences. An internationally recognised biomedical scientist, Prof Mackay’s research into Lupus disease has led to clinical trials and new treatments. Now Director and CEO of QIMR Berghofer Medical Research Institute, she also experienced first-hand the challenges of raising a child while maintaining career momentum.

Dr McWilliam assisted Prof Mackay in the early planning phase that lead to the School’s Early-Mid Career Researchers Association (EMCRA), which has been instrumental in supporting developing researchers since its inception.

"Prof Mackay is very accomplished in her scientific career and an inspiring scientist," he says.

“Our cells have a protein called MR1, which captures small metabolites from microbes and then it presents these to an abundant T cell population – called MAIT cells. Hence MR1 is a molecular link between commensal/pathogenic microbes and our immune system,” he explains. “It’s function is firstly to help our body establish a defensive layer to help MAIT cells to stay in barrier tissues such as the skin or the airways. And, secondly, if we encounter a bacterial pathogen, it ‘switches on’ MAIT cells to help fight the disease.” Dr McWilliam’s team recently discovered how MR1 is turned off – how cells stop presenting it at the cell surface. “Cells have a specific molecular machinery that effectively pulls MR1 inside the cell, where it can’t stimulate MAIT cells anymore. This happens after MR1 has been able to activate MAIT cells for a few hours, and then it is pulled inside. We hypothesise this is to prevent too much immune activation.”

The next step is to find out which cells have MR1 and use it to turn on MAIT cells in the body. “Once we have this knowledge, we can target these cells with ways to boost MR1,” he says.

Dr McWilliam is also a recipient of a Discovery Early Career Researcher Award (DECRA) from the ARC, a VESKI Victoria Fellowship which enabled him to travel to Rockefeller University (USA) to learn chemical biology tools, an AMP Tomorrow Maker award, and MDHS Faculty Research Fellowship.

He says this grant will help his team work on new projects, tools and models to understand how the immune system communicates with microbes, to boost immunity, while gathering preliminary data for new projects and grant applications.