The University of Melbourne is one of Australia’s major research organisations, with expenditure second only to the CSIRO , and the largest cohort of research students in Australia. There are thousands of research stories at the University. Jaclyn Pearson’s is just one. 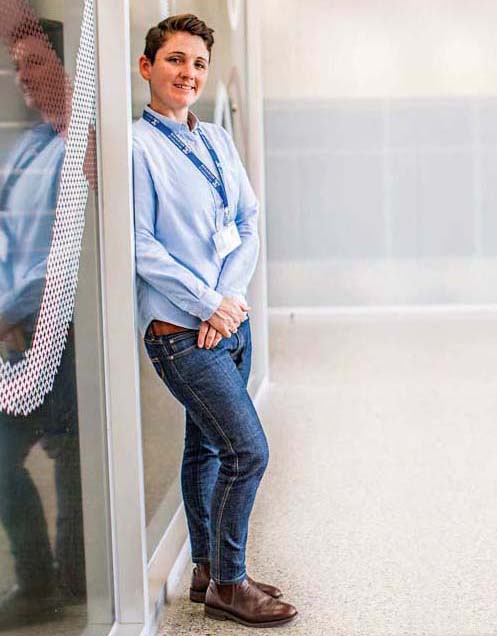 Dr Pearson swapped rock and roll for microbiology. She was an accomplished drummer touring with the ARIA-nominated rock band Lash when she decided she needed to return to her other love — science.

“I felt brain dead,” she says of her frenzied rock and roll years. “I just thought, ‘I have to do something different’.”

For her doctorate, Pearson (GCALL 2013, PhD 2014) conducted ground-breaking research into E. coli and other gut bacteria that cause diarrhoeal disease.

Her PhD revealed exactly how the bacteria use specialised proteins to prevent our gut cells from alerting our body’s immune system to infection.

“We found biochemical mechanisms which have never been described before in nature,” she says.

Pearson’s work, which won the 2014 Premier’s Award for Health and Medical Research, could lead to more effective treatments against these bacteria in the future.

“Unless we understand all of the ways the bacteria causes the infection you can’t actually treat the infection,” she says. “And there is no effective vaccine for these bugs at the moment.”

Pearson — one of the 4844 medical and health researchers aligned to the University — also received the National Health and Medical Research Council’s Peter Doherty Early Career Fellowship and now works as a postdoctoral researcher at the Doherty Institute.

She says the collegial nature of the Doherty allows her to work more closely with other scientists fighting infectious diseases.

“We have a great bunch of people who work on viruses and the immune system here, which is also very useful for us in case we’re interested in what bacteria and viruses do once you put them in a system together.”

The study of microorganisms may not sound as glamorous as drumming for a rock band. But Pearson says she is fascinated by how something “so small could have such a huge impact in the world.”

Pearson knows the organisms she studies cause disease in millions of people. “It should be something that we can fix,” she says.

“People have been working on these bacteria for over a hundred years. And we’re still figuring out exactly how they’re causing disease and exactly how we can treat them.”

This article first appeared in 3010, a Melbourne University magazine. Click here  to view the original.

Dr Pearson is a researcher in the Hartland Laboratory, Department of Microbiology and Immunology, School of Biomedical Sciences at the Doherty Institute. In 2016 she won the Annual Scientific Meeting (ASM) Jim Pittard Early Career Award which recognises Australian research in microbiology.

Dr Pearson was also a 2016  Fresh Science finalist, in recognition of her research in E coli. Fresh Science is a national competition which encourages up and coming young researchers to communicate their science to a wider audience.