You may have heard the terms “haemotoxic”, “neurotoxic”, and “cytotoxic” being used to describe snake venoms – but what do these terms actually mean? Today we are taking a closer look at how toxins and venoms fit into these broad categories.

Snake venoms are complex, bioactive mixtures that typically contain dozens of toxin types. There are a number of ways toxins can be classified, depending on which hat we are wearing. For example, with our biochemistry hat on, we group toxins according to their conserved core protein structure, which represents their shared ancestry. With our clinical hat on, we sometimes classify toxins according to the physiological pathway or system that they predominantly affect. On this clinical basis, most toxins fall into one of three very generalised categories: haemotoxic, neurotoxic, and cytotoxic. Many venoms are dominated by toxins that belong to just one of these categories, and in these cases the venoms will also be generalised as such. However, numerous venoms contain toxins that fall into two or even all three categories. A single toxin may also fall into multiple pathological classifications. This is because many toxins are “promiscuous” - their broad specificity enables them to interact with a number of different molecules to induce various effects. For these reasons, it is important to note that terms such as “haemotoxic” do not encompass the entirety of a given venom's effects, but instead describe a subset of its pathologies. The venom of many vipers, such as the two-lined forest pit-viper (Bothrops bilineata), have both haemotoxic and cytotoxic properties. Image: Sebastian Di Domenico CC2

While the term haem refers to an iron-containing component of a specific group of blood-associated proteins, the word is derived from the Greek haima, which means “blood”. The prefix haem is used in this context, and haemotoxin therefore refers to molecules that affect haemostasis – the stabilisation of blood flow and bleeding. Haemostasis is maintained by a complex network of regulatory compounds. Blood vessels are naturally prone to rupture, and there are dozens of proteins involved in plugging these small tears. Once the breach is repaired, there are dozens more proteins that are responsible for lysing (dissolving) the clot. A small army of compounds also drives the constriction and dilation of blood vessels that is required to maintain blood pressure and flow. Haemotoxins may target any one or number of these compounds.

A large number of haemotoxins activate proteins that induce clotting. In a prey animal such as a mouse, whose small body gets flooded with venom, this typically results in massive clotting and stroke. In human bite victims, however, this can induce haemorrhage (excessive bleeding). As humans have a large blood volume, the toxins are more readily circulated and diluted throughout the body. As a result, the procoagulant toxins initiate the formation of countless tiny clots – microthrombi – that are dispersed throughout the blood. This consumes essential clotting proteins, making them unavailable for regulation of the small ruptures that occur naturally and frequently throughout the body’s vasculature. This can generate chronic internal bleeding. Such bleeding can also be promoted by toxin-induced vasodilation (vaso = vessel) or vasoconstriction, as well as by the action of haemotoxins that degrade blood vessel walls and those that degrade or inhibit haemostatic proteins to cause a “true” anticoagulant effect. Often a snake’s venom will contain different toxins that induce each of these activities, acting in synergy with devastating impact. Strong haemotoxic venom can lead to fatal internal haemorrhage and cardiovascular collapse.

Broadly speaking, these activities are most commonly induced by toxins from the serine protease, metalloprotease, and phospholipase A2 families, all of which dominate viper venoms. Accordingly, haemotoxicity is commonly associated with most members of the Viperidae family. Other snakes with haemotoxic venom properties include the majority of Australian elapids, such as the browns (Pseudonaja), tigers (Notechis), and taipans (Oxyuranus), as well as the stiletto snakes (Atractaspis) - members of the Lamprophiidae family. 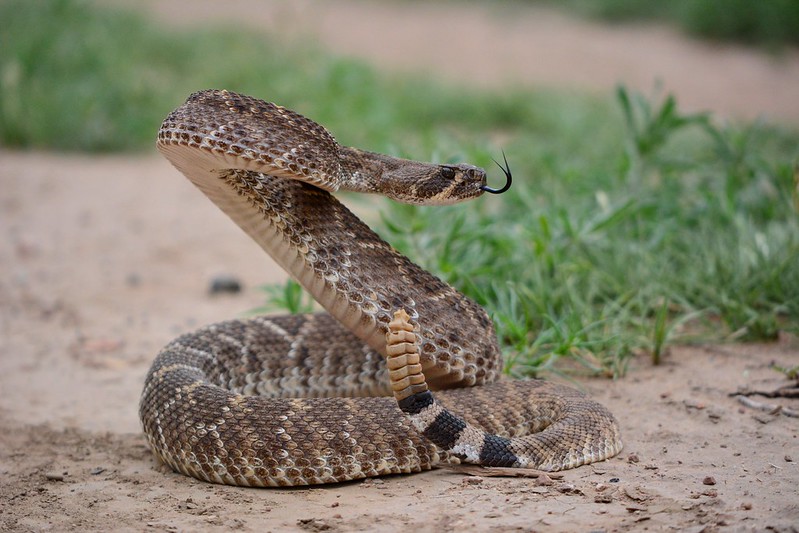 Most (but not all) vipers, including the western diamond-backed rattlesnake (Crotalus atrox), possess haemotoxin-dominated venoms. Image: Andrew DuBois CC2.

Neuro pertains to nerves. Neurotransmission is also a complex process, governed by numerous compounds and receptors. Neurons (nerve cells) transmit signals down their length via electrical impulse, which is potentiated by the flux of charged ions in and out the nerve cell body. When the impulse reaches the junction between cells, neurotransmitters (small signalling molecules) are released into the synaptic cleft (the gap between the cells) to transmit the signal to the adjoining neuron or muscle fibre. Depending on which neurotransmitters are released, they then bind to receptors that either excite or inhibit it.

Snake venom neurotoxins interfere with nerve signalling in a number of ways, the most common of which is competitive binding. In this scenario, the toxin binds to a specific receptor in a manner that blocks neurotransmitters from binding the receptor. This prevents the signal from being relayed by the nerve cell to the muscle cell, the result of which is flaccid paralysis. This generalised activity is mostly induced by small molecules belonging to the three-finger toxin family, which commonly dominate the venoms of elapids,  including kraits (Bungarus) and cobras (Naja), as well as the sea snakes (hydrophiids) and such colubrids as the brown tree snake (Boiga). 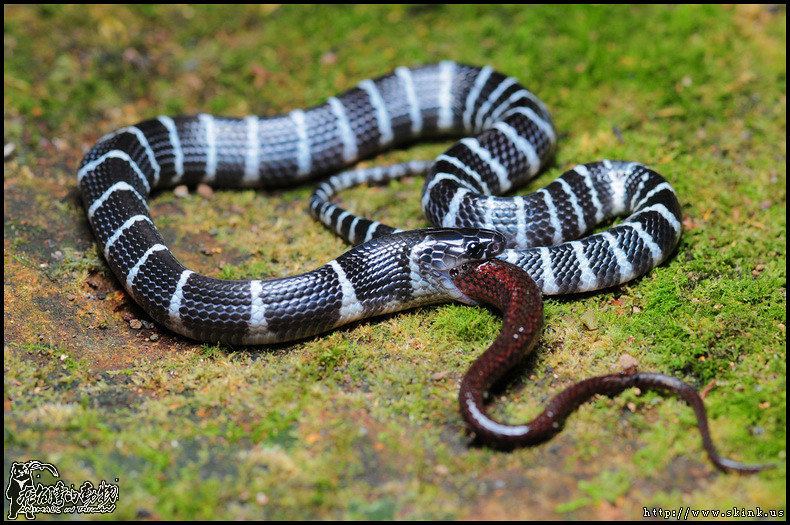 Alternatively, and less commonly, neurotoxins may bind to receptors in an excitatory manner to cause the over-release of neurotransmitters. Simultaneously, the removal of these excess transmitters from the junction is prevented. This swamps muscle cell receptors to induce prolonged fasciculation - extreme stimulation and muscular contraction, or spastic paralysis. This kind of paralysis can be induced by a relatively small number of three-finger toxins, such as calliotoxin (found in Malayan blue coral snake venom, Calliophis bivirgata), and by dendrotoxins, which are found in the venom of mambas (Dendropaspis).

The majority of snake venom neurotoxins target the neuromuscular junction (the connection point between neurons and muscle fibres). Respiratory failure arising from paralysis presents the greatest pathophysiological threat following neurotoxic envenoming. With adequate treatment, the lasting damage incurred by three-finger toxins and dendrotoxins is often negligible as their binding is typically reversible and limited cellular damage occurs. Unfortunately, this is not always the case - an additional mode of neurotoxicity in snake venoms can occur via the degradation of neurons. This causes depletion of neurotransmitters by damaging the structures that produce them, resulting in flaccid paralysis with irreversible neuronal damage that can take days or weeks to heal - even with antivenom treatment. This form of neurotoxicity is produced by phospholipase A2 toxins, which are expressed in the venom of some vipers, including certain populations of Russell’s viper (Daboia) and rattlesnakes (Crotalus), and elapids, including the taipan (Oxyuranus) and several sea snakes (hydrophiids). Cyto refers to cells, and cytotoxicity broadly describes a toxic effect on cell function. Technically speaking, this also means that many neurotoxins (such as the neurotoxic phospholipases) and haemotoxins (such as the vessel-degrading metalloproteases) are cytotoxic. It is a very generalised classification, which can be further defined based on the type of cells that are being damaged. For example, myotoxins damage skeletal muscle fibres (myo = muscle); cardiotoxins specifically affect cardiac (heart) muscle. Some toxins cause indiscriminate cell death, leading to localised tissue die-off. In these cases, it is appropriate to simply call them cytotoxins. When speaking about cytotoxic envenoming pathologies in a more general sense, it is usually localised (as opposed to systemic) cell and tissue damage that is being referred to. Cytotoxic activity can lead to oedema (fluid retention), severe blistering, apoptosis (cell death), and necrosis. Examples of such cytotoxins can be found in most, if not all, toxin families, and are common in the venoms of elapids such as cobras (Naja), king cobras (Ophiophagus), and most vipers. 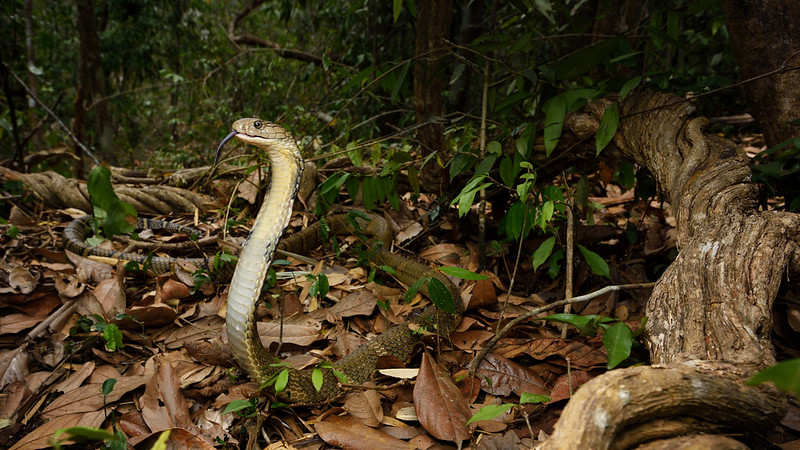 The king cobra (Ophiophagus hannah) is the largest venomous snake in the world. Its venom contains  cytotoxins that can cause necrosis, along with large quantities of neurotoxins. Image: tontantravel CC2.

In essence, the terms “haemotoxic’”, “neurotoxic”, and “cytotoxic” refer to the generalised activities of toxins and venoms, telling us very little about the molecules themselves. However, while limited information can be garnered from these categories, they are a useful means of talking simply about certain envenoming characteristics.