The Act to form the University of Melbourne was passed in 1853 and the first students were admitted in 1855. Under the Act, the University could confer Bachelor and Masters degrees in Arts, Medicine, Laws and Music. Graduates of other universities could be admitted to ad eundem gradum degrees and in this way Melbourne degrees in Medicine were granted to more than 20 practitioners before a medical school existed. Anthony Colling Brownless, a medical graduate with a considerable private fortune, was appointed to the University Council in 1855 and immediately began to campaign for the formation of a medical school. After considerable set-backs in obtaining funding, the Medical course began with three students in March 1862. The government gave it recognition by passing legislation that would permit the use of cadavers (An Act for Regulating Schools of Anatomy) in June 1862. This, being the first such act in Australia, gave the first legal basis for anatomical, and hence undergraduate medical, teaching in this country. 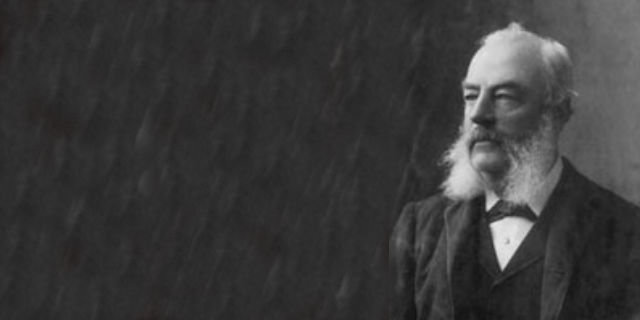 The first Professorial appointment was made that year. It was to George Britton Halford, who was lecturer in Anatomy at the Grosvenor Place School of Medicine in London . At the age of 38, Halford took up the position of Professor of General Anatomy, Physiology and Pathology. In correspondence, Halford referred to himself simply as Professor of Anatomy. The Medical School was run by a Board which, strangely, did not include Halford, who did not hesitate to complain. This anomaly appears to be due in part to clashes with the Vice-Chancellor, Brownless, which was to be redressed by Halford when he manoeuvred to replace the Board with a Faculty in 1873. 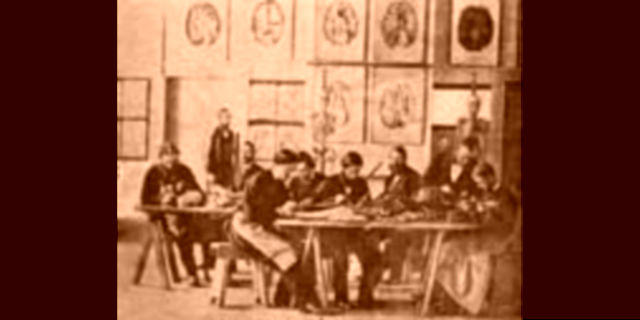 One of the first 3 students, William Carey Rees, became the first junior appointee in the Medical School in 1865. He was a Demonstrator in Anatomy, with the title of Prosector. Rees graduated in 1867 and was replaced as Demonstrator in Anatomy by William John Smith with a salary of £100 plus a fee of £4/4/- from each student. Smith remained only until 1871, to be replaced by O V Lawrence. 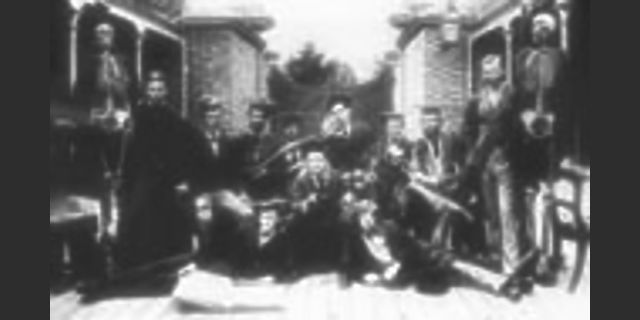 Medical students in the 1870's

Admission of Women into Medicine

In 1871 Halford clashed further with Brownless. It was the policy of Council, supported by Brownless, not to admit women to matriculation in the University. Halford had been elected President of the Professorial Board and in this capacity admitted the matriculants. When a woman candidate presented in 1871, Halford indicated that he would not stand in her way. Halford was hastily relieved of his duties. Despite Halford being re-elected by the Professors in the following year, Council obstinately refused the matriculation of women. The admission of women was eventually forced on the University by an Act of Parliament (University Constitution Amendment Bill, 1881). The first women were admitted to the medical course in 1887. 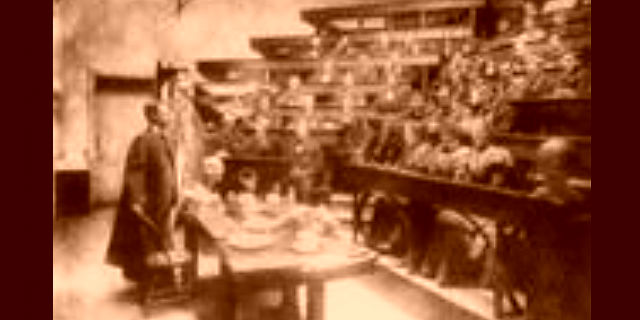 In 1881, Halford suggested that it was time to appoint a second pre-clinical Professor. He wished to return to research work he had abandoned on leaving England and proposed that he become Professor of Physiology and that a new appointment in Anatomy and Pathology be made. This did not immediately come to pass, though Harry Brookes Allen was appointed lecturer in Anatomy. Then at the end of 1882, Council decided to act. Harry Allen applied for the Chair of Anatomy and Pathology on the same day that Council met (27 November) and the next day received a reply appointing him Professor of Descriptive and Surgical Anatomy and Pathology. Halford assumed the role of Professor of Physiology and Histology, but continued, with Allen, as co-examiner in Anatomy. Allen took over from Halford as Dean in 1886. 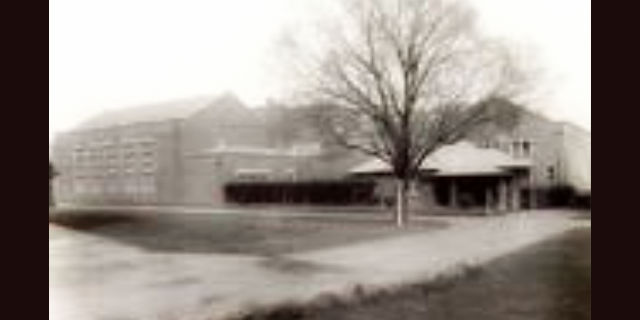 The second Anatomy building,now known as the Berry building

Appointment of Richard James Arthur Berry as Professor of Anatomy

There was considerable pressure on Allen as Professor of Anatomy, Professor of Pathology, Pathologist to the Royal Melbourne Hospital and, for a period, Dean. Eventually Council found the funds to divide the Chair and, in 1905, Richard James Arthur Berry was appointed Professor of Anatomy, with Harry Allen retaining Pathology. Berry set forth with great vigour to revitalise the Anatomy Department, which had run down, largely due to Allen's preference for his chosen profession, pathology. Berry was responsible for extending the physical accommodation of the Department in 1906 and again in 1923, when a new building was completed for Anatomy. Berry had also argued for the incorporation of histology, and in November 1923, the new Department of Anatomy and Histology was opened. Berry retired in 1929, to return to England at the age of 62. He had created a Department active in teaching and research. His own research had been in physical anthropology and the young John Eccles, later to win the Nobel Prize in Physiology or Medicine, had been a Demonstrator in the Department. 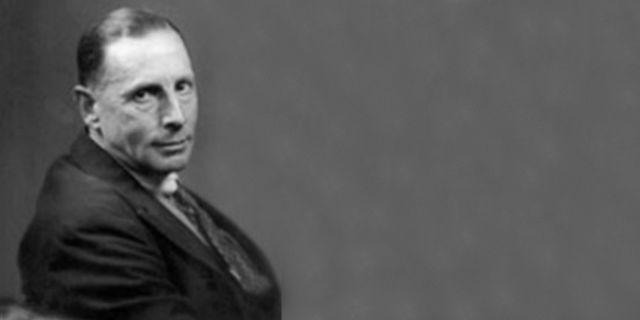 Following Berry 's retirement, Council invited Frederic Wood Jones, at that time Rockefeller Professor of Physical Anthropology in Hawaii, to accept the Chair. Wood Jones arrived in 1930 to take up the appointment. When he arrived, there was one Senior Lecturer, one Lecturer, a part-time Lecturer and three part-time Demonstrators. There were 141 medical students in 2nd and 3rd years, as well as Dental and Massage students and a small number of post-graduates studying for speciality examinations.

Wood Jones was dedicated to the marriage of teaching and research. In the period of 1930-1937, when he was in Melbourne , he published some 80 papers and several books. Physical anthropology of the Australian Aborigines was the major theme. In 1932-1933 he spent a period as temporary Director of Anatomy at the Union Medical College in Beijing, China . In 1937, Wood Jones accepted the Chair of Anatomy at Manchester. In 1910, Wood Jones had been Lecturer in Anatomy in Manchester under Elliot Smith; at the age of 60, he seemed pleased to have the opportunity to return. 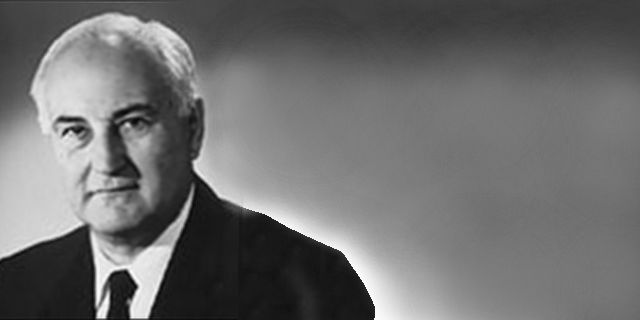 Sydney Sunderland, Senior Lecturer in Wood Jones' Department, who was working in Oxford at the time, was appointed to be his successor. At the time he took over, the only Department with adequate accommodation, indeed the only Department of the Medical School with its own building (due to Berry 's foresight and vigorous campaigning) was Anatomy. The intervention of the war slowed developments in the Department, but with the influx of returning soldiers after 1945, some expansion became possible. The first Associate Professors were appointed in Anatomy, Kenneth Fitzpatrick (Red) Russell in 1948 and Leslie John Ray in 1956. In 1955, the title Reader was introduced and began to replace the earlier title. John Laverack was appointed as Reader in Histology and Embryology (1956) and Alexander Roche in Anatomy (1962).

Syd Sunderland became Dean in 1953, and, as had previous Deans, retained his Headship of the Department. By 1955 this became untenable and Les Ray took over as Administrative Head of the Department. In 1961, Sunderland took the title of Professor of Experimental Neurology, a manoeuvre that allowed Ray to take the Chair of Anatomy. Sunderland continued to have his office and research space in the Anatomy Department.

First Dean of the Faculty

Sunderland was now effectively the first full-time Dean of the Faculty. The time leading up to the Centenary of the Medical School was one of considerable expansion in tertiary education in Australia , and there was pressure for the creation of a third Victorian Medical School . However, Syd Sunderland had the ear of the Premier, Sir Henry Bolte, and managed to convince him that the money would be better spent on a new medical building, and expansion of staff numbers in the school. Out of this emerged a commitment to the present tri-radiate building, and the creation of a second Chair in Anatomy, which was taken up by Keith Campbell Bradley in 1966. Syd Sunderland had secured the funds, but it fell to Les Ray to lead the design of the Anatomy wing. He put enormous energy into this task, in particular into special features desirable in the Department, which shows itself in the well appointed building the Department now occupies. The Medical Buildingwhen opened in 1968

In 1968, the Department moved to the new building, and, in the same year, Ken Russell was appointed to a Personal Chair in Anatomy and the History of Medicine. In 1976, Keith Bradley retired and, in 1977, the Chair was offered to Graeme Bruce Ryan, who took up this appointment in 1978. In 1979, Graeme Ryan took over as chairman, with Les Ray as Deputy, and set out to expand the Department's interests, particularly into cell biology, and to build up its research profile. Les Ray fell ill at the end of 1981 and died in early 1982; Geoff Kenny then became Deputy Chairman, a position he held until his retirement in 1990.

Ian Darian-Smith, who had been Professor in Physiology at Melbourne since 1974, was recruited to Anatomy in 1983 to take the Chair made vacant by Les Ray's death. Ian Darian-Smith had a strong record in research into sensorimotor function, particularly in primates, and set about to building up research in neuroscience in the Department. He also developed a fully integrated course in neurosciences in the medical course, uniting the teaching of neuroanatomy, neurophysiology and the elements of neurology for the first time. Under the stewardship of Ryan and Darian-Smith, the Department was singularly successful in expanding its research efforts and in achieving excellence in undergraduate education. In 1985 Graeme Ryan was appointed Dean, while retaining his title as Professor of Anatomy and his position as a member of the Department, and Ian Darian-Smith became Chairman, a position he held until his retirement at the end of 1992.

In January 1993, John Barton Furness, who had also been Professor in the Physiology Department, succeeded Ian Darian-Smith as Professor and Chairman. Daine Alcorn, who had succeeded to the role of Deputy Head in 1990, continued in that role. The development of cell biology as a major part of the Department's teaching and research profile continued, and at the beginning of 1993, the Department became the Department of Anatomy and Cell Biology.

Graeme Ryan resigned at the end of 1995 and Daine Alcorn was appointed to the vacant chair. The following year she became Head of Department. In 1999, at the conclusion of Daine's three-year rotation, John Furness became Head again. However, John's research area was rapidly gaining in momentum and he decided to commit himself fully to this, which saw Daine resume the role of Head in 2000. In July 2002, Daine left the Department to become Dean of the Faculty of Life Sciences at RMIT and Tony Goodwin was appointed Head, a position he held until the end of 2012.

The department celebrated 150 years as an entity teaching Anatomy in 2003 and 100 years as a Department of Anatomy in 2006. To celebrate this double milestone, Melbourne Medical Historian Ross Jones authored a book, "Humanity's Mirror", tracing the history of the Department from 1853 to the 1970's.